What in the heaven happened at the end of 'Chilling Adventures of Sabrina'?

We attempt to make sense of the Netflix series' finale

And with that, Sabrina is no more at Netflix. *MAJOR SPOILERS FOR PART FOUR OF THE DRAMA SERIES BELOW*

The final, fourth part of the 'Chilling Adventures of Sabrina' premiered on New Year's Eve, rounding out 2020 in a way that seemed aptly fitting - a bit of a mess. That's not to say that the whole of Part 4 of the teenage drama series was all-bad - but it was very rushed.

Part of this is potentially down to the production being forced to finish shooting early, but the cosmic horror was always leaning heavily into confusing storylines anyway. It makes sense it should bow out after four seasons (but cast member Ross Lynch previously said a fifth would have been greenlit, were it not for the pandemic).

During the final eight episodes, we had some major head-scratching moments (for the characters and viewers it should be noted). As well as the Eldritch Terrors wreaking havoc on Greendale, we also had Aunt Hilda's wedding, Lillith's child Adam coming prematurely, Pandora's Box, bucketfuls of teenage angst and relationships, as well as the surprise appearance of Beth Broderick and Caroline Rhea reprising their roles as Hilda and Zelda. Oh, and the death of Sabrina. On more than one occasion.

Yes, the series culminated in the killing of Sabrina Spellman (whose soul was inside of the dead Sabrina Morningstar), ending the cycle and the series once and for all. 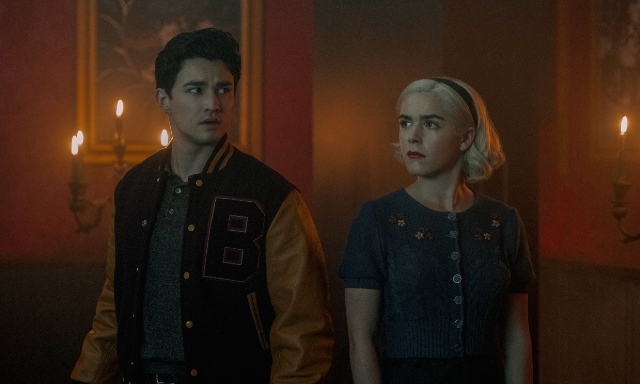 Picking up where season three finished up (Netflix really need to provide a recap of these shows at the top of a new season), one Sabrina ruled Hell while the other resided to live our her "normal" life on Earth. There's a lot of too-ing and fro-ing in the first few episodes between the twins, resulting in the very fabric of time and space being compromised.

Because of this - which is figured out by Ambrose, without which Sabrina would have died long ago - Sabrina Morningstar must leave this realm and live out the remainder of her life in the alternate reality which is on a collision course for this reality. This results in the best episode of the season unfolding before us.

When Sabrina Morningstar arrives, she's faced with her 'Sabrina the Teenage Witch' aunties (and a fake Salem too - not voiced by Nick Bakey, but by Luke Cook who plays Lucifer in the series, FYI). This results in her attempting to escape Eldritch Terror numbers seven AND eight, The Endless and The Void.

After the reveal of the original Hilda and Zelda being the evil entity The Endless (a nice twist), Morningstar manages to escape the Void from consuming her. Back in the reality from where she came, she dies on the lap of Sabrina Spellman.

And so, Spellman decides that she must face this all-consuming evil all on her own. This is where the episode really ramps things up with hardly any breathing room - attempting to make good of four seasons all within a one-hour finale.

Hoping that trapping The Void inside Pandora's Box will be all that she has to do, Spellman travels to The Void, opening the artefact and trapping it inside. Meanwhile however, her family and friends believe the young witch will not return, and so cast a spell to transfer her soul into Morningstar's dead body. It works, but Sabrina is pissed - but she's not the only one.

It's her 17th birthday, and Morningstar's father and husband, Lucifer and Caliban, wreck the party by waging war on the Spellmans. It turns out that Sabrina now has a piece of The Void inside of her, and she causes many people to disappear - Harvey's father, Roz, and Prudence.

Sabrina plans to exile herself, and Father Blackwood joins her with a devilish plan of his own. The true antagonist of the series, Blackwood wishes to sacrifice Sabrina to take over control of The Void for his own doing. Hatching a plan, Sabrina's cheerleading team head to the cave where the two are hiding. They manage to blind Blackwood and free Sabrina.

However, in order to help the disappeared people return, she'll have to use her Void powers one final time to open the portal and rescue the lost. Of course, Sabrina knows how it will all end, and the episode culminates with her sacrificing herself to save the realm. The Omen of Death, the Banshee, can be seen in all black before Sabrina dies.

Joining Sabrina in her very-white afterlife, she's joined by her lover Nick, who says he drowned in The Sea of Sorrows to be with her for all of eternity. Given how on and off their relationship was, this feels like a bit of a cop-out.

It leaves viewers with an uncomfortable ending to the 'Chilling Adventures of Sabrina' series that, for the most part, was rather enjoyable. We still wish Harvey had pulled up on his motorcycle and saved the day.