Nothing But Thieves talk to us about their favourite movies, and their obsession with Phil Lynott

We chatted with Joe and Phil from Nothing But Thieves

Ahead of their final gig at The Academy in Dublin recently, we chatted with Joe Langridge-Brown, and Phil Blake from Nothing But Thieves.

Welcome to Dublin - how was the trip over?

Phil Blake: We actually came from Belfast today. It's a bit weird to go from Ally Pally in London to a small and sweaty gig in Belfast, but we love those shows.

Joe Langridge-Brown: Yeah we've actually played The Academy before too, we played downstairs. Last time we were here, Electric Six were playing up here. The venue's great.

Is that weird for you - playing downstairs last time you were here, and now you're on the top?

Joe: Well it is, and it isn't. The last time we were here was three or four years ago.

Phil: Yeah, we've done Dublin on our own before, but last time we were here, we supported Muse at 3Arena.

Joe: Oh I forgot about that!

Phil: Yeah I didn't remember we did either, until we drove past 3Arena and I was like "I know that area" - I remember an argument. Not between us - our manager and tour manager, which is a tale as old as... bands. Managers and tour managers having a go at each-other - it's an industry standard!

What do you make of the Irish fans then? Compared to London, let's say.

Joe: They don't clap - and I'll tell you why... They've all got a drink in their hand. It's bloody true. They're having a good time, they're singing along, and whooping - but they've got a pint glass.

Phil: Everyone seems really into it.

Joe: This is our last show of our 'Breaking Machine' tour now.

Phil: Should we reveal the stats - do you want to know the stats?

Joe: We spent two and a half hours compiling these stats.

Phil: So, 'Broken Machine' the album came out September last year, but we started our tour for it a few months beforehand. 18 months ago we started on the tour. We compiled all of the dates, where we've been, and the mileage we covered. And it goes like this...

Joe: Right, so since the 'Underplay' tour, which is the first tour of 'Broken Machine,' we've done 220 shows, in 35 countries, two weeks worth of playing music back to back on stage, and 220,420 miles travelled - which is 92% of the way to the moon. How's that for hot stats?

Phil: Yeah we're actually quite pissed off we didn't get the whole way to the moon.

Are you absolutely wrecked?

Phil: Am, to be honest - yeah. Tours are really, really tiring, but we did have some days off haha. This has been our life now for four years, and when we go home - me and Joe are similar - we just get a bit bored. No rest tonight though, we will be celebrating the end.

Any plans for tonight then?

Phil: Yes, I want to go and see the Phil Lynott statue. He's my absolute bass hero. He's the reason why I picked the model of bass that I did, after seeing just how damn sexy he looked with it. I've tried - I've failed  - but 10 out of 10 for effort, you know? I tried. 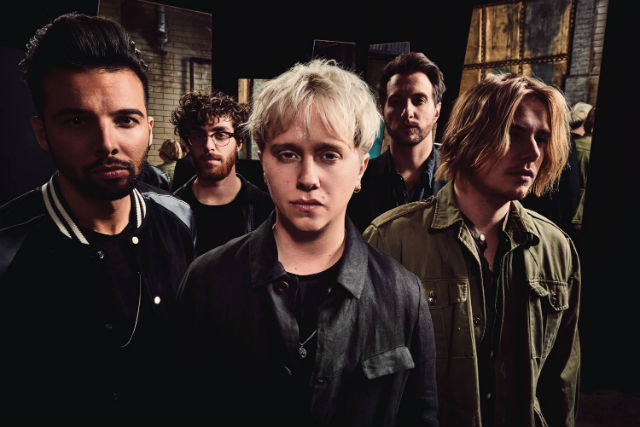 Would Irish music have been an influence then for the band at all?

Phil: I'm sorry there must be other bands in Ireland other than Thin Lizzy and U2 - you must hear it all the f*cking time! There's Kodaline, and The Script - we've met them a few times. My dad was really into Thin Lizzy growing up. I'm Dom's cousin (another bandmate) and he was a classically trainer guitarist. I remember when he started secondary school, and he was already playing it - I was like "that's not cool" - and I gave him a Thin Lizzy 'Live and Dangerous' CD and said play this.  "Learn electric guitar because you're not going to make any money playing classical." Which is actually not even true.

Joe: Are you just rehashing the story of 'School of Rock'? Is this what's happened? You know you're not Jack Black, right? You've done it again. He's always doing this hahaha.

Are you a fan of the way Irish people pronounce your band name with the Celtic "T"?

Phil: ...Yeah? That's the first time I've ever heard an Irish person say it I think. It mustn't be, but it's nice. It's not often you hear it said in such a different way.

Joe: Yeah maybe we should change the way we say it, just tonight.

What would be your all-time favourite movie?

Joe: I'm a massive fan of the 'Rocky' series. I couldn't really choose one out of them. Or 'Goodfellas.'

Phil: Just say 'Flubber'. Yeah man, 'Flubber' is my fave... please don't write that! I'm a huge fan of Wes Anderson. He's incredible. I think my favourite would have to be 'The Royal Tenenbaums,' maybe because it was one of the first and that's what I'm attached to. Also, speaking of Robin Williams - we quote 'Mrs. Doubtfire' so often. The amount of times someone says "Help is on the way!"

Final question - I loved your BBC Live Lounge sets. Did you feel pressure performing them?

Joe: Yeah we've done three in total, but only one for this latest album.

Phil: The first one was not greatly-received - but we didn't give a f*ck.

Joe: We liked that one yeah, but I think people just were like "This isn't Mumford & Sons - that's not the riff!"

Phil: "You haven't done an acoustic, slow-downed version of the song - what the hell?" In BBC, you have to pick a song from their current A-List, unless you're an act of a certain calibre. And there were all of these DJ songs and we couldn't do any of it. But there was 'Believe' from Mumford & Sons on there, and it had the right melody. Joe made the shocking discovery that it fitted over 'Kashmir' by Led Zeppelin, and we had a real opportunity to play that on daytime radio - and we did!

Nothing But Thieves will be playing at Indiependence 2019.

Now Lindsey Buckingham has jumped on the 'Dreams' TikTok bandwagon