Maggie Rogers talks to us about studying 'Ulysses', and getting proposed to by Pete Davidson

What was it like to perform on 'Saturday Night Live' recently?

Maggie: It was so crazy. As a musician I feel like there are two goals that you have - artistic goals, careers goals... And then there are the goals that you can't say out loud. You know what I mean? When you're growing up you say you want to do this thing, but it'll never happen, and it sounds crazy to say it out loud. But 'SNL' was the dream I've always had, but not one that I would tell people. It felt too big to even dream about. It was beautiful to have the opportunity to play. I walked in on Thursday for our rehearsal and started crying. I grew up watching 'SNL' and to be on that stage was such an honour.

So many famous people have come and gone on that stage - it must have been so surreal.

M: Yeah, and I didn't even know what I was gonna wear. I ended up wearing this vintage dress that I bought in a vintage store in April. I was panicking about "What am I gonna wear?" And my parents came up to New York that day from Maryland. Mom asked if there was anything I wanted from home, and I said "Oh my gosh, you have to bring that red dress." And it all worked out.

What was it like to film the scene where Pete Davidson proposed to you?

M: Oh gosh, that was really funny... I think Pete is really funny and super sweet. But when they proposed that skit, they were like "Is everyone okay with this?" And I just thought "I'm fine with this - but is Pete okay with this? This feels a bit mean." But he thought it was funny. It was fun to do those promos, I always looked forward to watching them every week.

You're supporting Mumford & Sons tonight in the 3Arena, and this is the first night of the tour, right?

M: Yeah, I'm so excited. And this is the first time I'll ever be in an arena as well... It's a big evening. 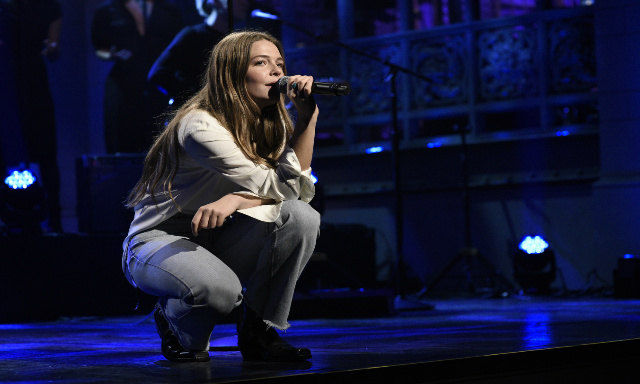 Have you played in Ireland before?

M: I've been in Ireland before for a couple of festivals, and our tour with HAIM came here. And I'll be back next year. But when I was in college I studied music, and English as well, and I did my senior English thesis on 'Ulysses,' and folk music as a form of narrative. I've always listened to Irish music. When I was reading 'Ulysses' for a year I had this map of Dublin on my wall as I was trying to make my way through this book. And so it's really special every time I get to spend time here. I'm so excited to be here and be a part of it.

You rarely meet many Irish people who've read any of 'Ulysses', let alone someone who has read the whole thing, so hat's off to you.

Do you know where your family is from in Ireland?

M: Just outside of Dublin City, my grandparents are all Irish. My mother's maiden name is Dunphy - so I'm Maggie Dunphy - so that's pretty solidly Irish. But I haven't yet really had a chance yet to spend a lot of time here, but I'm hoping in February that I'll get some time around our shows. It must be really frustrating for you guys whenever someone says "Oh, I'm Irish!" but obviously I'm a couple of generations into being an American.

Well, as long as you keep making good music, I think we can forgive you. Are there any Irish artists you're a fan of at the moment?

M: Hozier is Irish right? Andrew and I have become pals and I'm so excited about the music he's putting out right now. I heard 'Movement' today and I really liked it.

Is folk music quite popular in Maryland, where you're from?

M: Yeah, the bluegrass scene is big. I'm from a rural area, and country music is popular. But I grew up playing the banjo, because I'm a woman -  which is wild. Let me explain - I played guitar in high school with the other guys, and when I went to jam, I was the only woman in this group. There were so many people playing guitars, that they wouldn't really let me play that often. So I started playing the banjo, because I really wanted to play it. And if I played banjo I would always get to play.

M: I feel like I have to, otherwise I'll just get bored. Tonight's my first night in an arena, which is a whole new challenge. I love being around the Mumford (& Sons) guys - they make me feel so inspired. I'm so excited to spend this time around them, there's creativity and experimentation that happens when you hang out with a band on tour.

It's important to surround yourself with positive people like that, as well.

M: Totally. They're very community based and have welcomed me so warmly. When we're backstage they're being creative and always making sounds. We spent 10 days in Senegal making music together with Baaba Maal as well, and we get along really well.

Is there any artist that you're listening to right now that you really like?

M: The two records that I've been listening to on complete and utter repeat are BROCKHAMPTON's 'Iridescence' and Kacey Musgraves' 'Golden hour'.

Can we expect you to play any of your new album tonight?

M: I've just come off a month long tour of America, and I've been playing the whole record live. Basically, I'm sick of waiting. I wrote this record to play it live. My world has become touring now and I wanted to make a record that I'll be excited to play every night. So I might play a couple of new songs tonight.

Maggie, one final question - is it true that you converted a broom cupboard into a recording studio?

M: Haha, yes. When I was 16, I convinced the school to give me somewhere I could record after school, and this was the only available space. I made it mine and started producing my own music.

Maggie Rogers will return to Ireland to play The Academy on 14th and 15th February next year. Her new album 'Heard it in a Past Life' will be released in January.

Elton John is the first name announced for Glastonbury 2023