When Jesy Nelson announced her intention to depart from Little Mix for good just a few short months ago, most people took it to mean that she was taking a break from the music industry.

The pop singer said in a statement in December that the pressure of being in a girl group had become too much, and that she was taking time to 'reinvest in taking care of [herself] rather than focussing on making other people happy."

Now, however, it seems that the 29-year-old is ready to get back in the saddle and it looks like she's already plotting a solo career.

Nelson, who has remained active on Instagram since her announcement, posted a picture from the studio to her Insta Stories that showed two producers sitting at a mixing desk, one of them with a guitar. 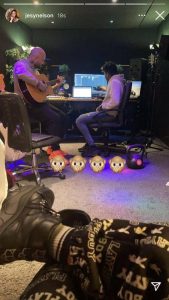 She added a picture of herself to her grid, with the caption "Let’s go ???":

There has been a mixed response to her news from Little Mix fans - some of whom are happy that she's continuing to make music, while some are confused.

Not Jesy Nelson doing a Zayn and leaving the band cos they wanted to live life normally / cos of their mental health... to end up straight into recording solo music....

Jesy said a reason why she left was because of people always comparing her to the girls as that was effecting her mental health, that doesn’t mean she’s going to stop making music.

Confused at Jesy Nelson being in a studio on her insta story?? She wanted to leave Little Mix due to her MH and pressure of being in the spotlight?? Going solo will be MORE pressure 👀👀

jesy nelson solo i am confused

Kick off your weekend with new ABBA single 'Just a Notion'