First Impressions: A track-by-track review of Green Day's new album 'Father of All...'

At just 26 minutes long, the rock titans' 13th studio album is their shortest yet - but it's far from their best

Whether you're a casual fan or have been devoted to them since 1990's '39/Smooth', Green Day are undoubtedly one of the biggest rock bands on the planet.

Over the last 30 years, Billie Joe Armstrong and his bandmates' output has ranged from the sublime to the ridiculous, while albums like 'Dookie' have helped to shape a genre and 'American Idiot' was a political concept album without the cringeworthy

When was their last great album, though? Like, really, seriously, truly great? Was it 'American Idiot'? Their recent run (the trilogy of 'Uno',' Dos' and 'Tre' and 2016's 'Revolution Radio') has been underwhelming, to say the least.

Perhaps that's why they've decided to shake things up for their 13th studio album. 'Father of All...' (full title: 'Father of All Motherfuckers') might seem on paper to be a combative political statement (we can guess who they might be talking about) – but Armstrong has denied that's the case, saying “Trump gives me diarrhoea, you know? I don’t want to write a song about it!”

Musically, meanwhile, he has described it as a mix of 'soul, Motown, glam and manic anthemic'. Green Day doing soul and Motown? Now this we have to hear...

It's also their shortest-ever album, clocking in at just 26 minutes. 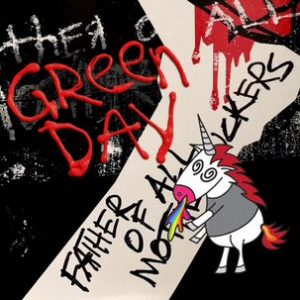 Father of All...
A frantic drum roll, a ragged guitar riff and we're off. This was the lead single, released back in September. Even after months of hearing it, to be completely honest, this sounds completely unlike Green Day – largely thanks to the fuzzy filter on Armstrong's voice and his falsetto, which we haven't heard much in the past. With handclaps and a hip-shaking beat, it sounds more like something from the early '00s garage-rock revival. If you'd told us this was a song by The Von Bondies or a band like that, we'd believe you.

Fire, Ready, Aim
Staying with the garage-rock vibe, this is another swinging, swaggering mid-tempo tune with Armstrong's trademark vocal snarl once again, missing. With lyrics about 'retribution', and accusations of 'you're a liar', it's a fun but forgettable sub-2 minute tune. So far, this is certainly not the Green Day album we were expecting.

Oh Yeah
This song immediately brings two (brilliant) songs to mind, in terms of tone, pace and style: The Vines' 'Highly Evolved' and The Raconteurs' 'Steady as She Goes'. A clunky beat and glitzy chorus about the trappings of fame and controversial reference to 'bulletproof backpacks' (who said this wasn't a political album?) that leads into an air-punching 'Oh yeah' singalong moment. It's probably the better of the three tracks we've heard so far.

Meet Me on the Roof
Right, we've taken a swing into poppier territory with this one. More handclaps (the handclaps are off the chart on this album so far) into a swinging ditty that takes in '60s school disco' rock 'n' roll and the sort of punky power-pop peddled by Fall Out Boy. For Green Day, that's an odd combination.

I Was a Teenage Teenager
Mike Dirnt's murky bassline opens this number, which quickly explodes into a song that's instantly more recognisable as a 'traditional', shall we say, Green Day tune. A strident, anthemic chorus with beefy riffs and lyrics like 'I was a teenage teenager, full of piss and vinegar' and 'My life's a mess and school is just for suckers'. Yes, we know that all three members of the band are now 47 years old. It's a grand song, but will it go down as one of their all-time best? Nope. In fact, we've heard nothing exceptional thus far.

Stab You in the Heart
Is it just us? No, surely not. It can't be just us who hears rock 'n' roll classic 'Hippy Hippy Shake'. We don't want to get sued by Green Day, so that's all we'll say about that.

Sugar Youth
Another sub-2-minute brisk, bristling punk-pop tune that barrels through at breakneck speed. It's energetic, it's zippy, but is it memorable? Nah.

Junkies on a High
The pace is slowed one again for this sluggish rock tune with a grimy riff and Armstrong drawling: 'Drink it in, dumb it down, suck it up as we watch the world burn'. Cheery stuff. Although this is one of the most cohesive songs here, there's no real magic to this album so far. Is it because the songs are generally short, or just sound a bit thrown-together? Either way, it's a bit dull.

Take the Money and Crawl
We're back to fuzzy garage-rock with spiky guitar riffs and that filtered voice again. Armstrong goes out of his way to offend with lines like “Take a walk, suck my cock”, but it's all a bit samey and uninspiring.

Graffitia
Strangely enough, there's a bit of blue-collar rock vibe to this song; when the balls-to-the-wall guitars are pulled back a bit, the melody is a lot groovier – yet it still retains that anthemic, arms-aloft feeling.

Verdict: On one hand, you can't fault Green Day for trying something different, but there's something to be said for sticking with what you're good at, too. Who is this album really for? It'll leave most fans scratching their heads. There's even an (unfounded) rumour doing the rounds that – given its short running time and its seemingly blase attitude to songcraft – this album is merely to fulful their contractual obligations with Reprise Records, and that another Green Day album (on their own, or another) label will be released later this year. Is it true? Who knows. In any case, we can safely say that this is an album we'll probably never listen to again.

We chat to Mike Skinner about the return of The Streets, losing his tour bus in Dublin & more