Chris Martin and co. throw a lot of different styles at the wall for their eighth album

Here we are, eight albums deep into Coldplay's varied career.

It's been quite a journey.

In some ways, they're unrecognisable from the band that released 'Parachutes' way back in 2000 (still a stone-cold indie classic, and we'll fight anyone who says otherwise). The mop-haired Chris Martin from the 'Shiver' video could never have known that he'd go on to become one of the biggest rock stars on the planet, or that his band would go on to collaborate with Beyonce, as they did on 2015's 'A Head Full of Dreams', or Rihanna (on 2011's 'Mylo Xyloto').

Although the words 'double album' may strike fear into the hearts of some people (raises hand), to give Coldplay due credit, at least they're trying something new this time. That goes for the manner in which they've promoted the album (via ads in local newspapers) and the fact that they're not intending to tour it for environmental reasons, too.

Let's get started, shall we? 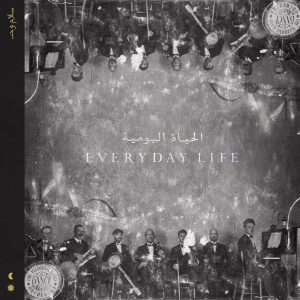 A 2:31 orchestral instrumental seems like an odd way to open a rock album, but somehow it works. The gentle shimmer of strings and slow thrum of cello is really quite lovely. Okay, we can't be cynical about this at all. Damn it.

Now, this is more like the Coldplay we know. The gentle, brisk thud of Will Champion's drum leads to slick synth lines before Martin's vocals kick in; later in the song, a female voice comes in with a mystical eastern vibe. With lines like 'What can it tell me, when I'm with you I'm walking on air” sounds like a love song to us – possibly about his missus, Dakota Johnson? So far, so inoffensive.

Have Coldplay ever gotten political before? Not as overtly as they do with this song, anyway. Here, Martin tackles police brutality and racism in the States as he sings 'There's blood on the beat / Law of the jungle and the law of the street' and 'I get no shelter, and I get no peace / And I just get more police'. There's even a (real?) audio clip from a cop pulling over a black man incorporated into the song – which starts off as a softly-sung spongey plod before exploding in an intense clatter of drums, guitar, strings and piano.'

Coldplay doing gospel?! Well, this album is certainly varied so far. From the intensity of the last song, this is a finger-clicking, soulful little ditty with Martin's voice and piano enhanced by a gospel choir. What more can you say? It does exactly what it says on the tin, we guess.

Oh, here it is. The emotive, heartstring-pulling ballad – it was bound to be in there somewhere. A heartbeat of a drum beat set against a melancholic piano riff and lyrics like “Daddy are you out there? / Daddy, why'd you run away?' Ah here, lads. Given that Martin apparently has a good relationship with his own dad, it doesn't seem to be written from personal experience. If you were to hazard a wild guess, it could be related to Martin going on tour ('You're so far away') or being divorced from his children's mother. Or perhaps it's just a sad story about a lonely child. Either way, don't listen to this if you're in any way emotionally fragile.

See, this is the problem with double albums. There's always going to be filler – and this track (more of an interlude, really) is the perfect example of something that should have been culled. Literally Martin playing around with a scuffled guitar riff as birds tweet in the background, it sounds like it may even have been recorded on his phone. Which is all well and good – but why did this half-baked sketch make it on to a Coldplay album?

This is more like it. One of the first singles from the album, this is the sort of song you'd expect from one of the biggest bands on the planet. A slinky, sassy, brass-infused number, it's one of the longest songs on the album – but also undoubtedly one of the most interesting. There's a bit of a middle eastern/African/jazzy freestyle vibe to this – thanks, we imagine, to Femi Kuti's input. Belgian rapper Stromae also contributes vocals. Definitely the best track so far.

'When I Need a Friend'

Have Coldplay rediscovered their religion? With 'Church', the gospel thrust of 'BrokEn' and now this hymnal number enhanced by the London Voices Choir, it sounds like it. After the last track, this is certainly unexpected – but not necessarily in a good way. The tracklist is bouncing frantically from style to style and it's starting to makes things feel seriously fragmented.

This track marks the opening track of Part 2 of the album, aka 'Sunset'. If you hadn't guessed from the last track, Coldplay want to keep you on your toes. So the fact that the brusque strum of this song – which takes a wry look at gun culture and the blinkered view of world leaders – sounds like Coldplay doing outlaw country music makes perfet sense. “Everything's going fucking crazy, maybe I'm crazy too,” he sings at one point. You're not on your own there, Chris.

Okay, we're back to more recognisable Coldplay fare now. Not saying that's necessarily a good thing, by the way – it's nice to have variation on an album. That said, Coldplay excel at this sort of lighthearted, poppy, bouncy material. Nowt wrong with a bit of a singalong with a surging chorus.

This is interesting. In a way, this sounds like a song from one of their earlier albums – a pretty little acoustic flutter with piano, a lovely melody and Martin's soft falsetto over a soft midtempo beat. One of the most simple, yet most satisfying songs here.

We've had them doing gospel, hymns and now here's a doo-wop number for good measure. This is good example of stuff feeling shoehorned onto the tracklisting at the expense of consistency. Let's just say that we're now 100% sure that we do not want a full album of Coldplay doing doo-wop in our lives.

We're back to just Martin and an acoustic guitar for this song, which is an ode to exactly what you think: old friends. “Tony was a friend of mine, we were together all the time / He had my back, once he really saved my life”. A simple, strummed song that does the job.

We're suckers for a plaintive piano melody, and this is a really lovely composition that sounds like it could have been pulled from a period drama film soundtrack. Halfway through, bassline and a subtle beat breaks through, as a spoken word passage in Farsi kicks in. “May there be peace, and love, and perfection through all creation, through God” - a line by 12th century Persian poet Saadi Shirazi. Only Coldplay, wha'?

'Champion of the World'

The guitar line from this song was taken from a song by Owl John, the side project of Frightened Rabbit frontman Scott Hutchison, who sadly died last year. It's one of the most anthemic indie songs on the album; a reliable singalong that's perhaps a little safe. It's grand.

The title track and the closing track rolled into one: it wouldn't be Coldplay if they didn't go out with a bang. An instrumental intro leads into an emotive, piano-led number that leads into a rousing singalong made for hoisting lighters aloft in stadiums. “What in the world are we going to do? Look at what everybody's going through,” Martin sings. “What kind of world do you want it to be? Am I the future or the history?"

VERDICT: It's clear that Coldplay have now reached the 'We'll make the album we want to make' stage of their career. This album seems far less concerned with radio hits (although there are certainly a few potentials) and is more about experimentation. Sometimes, that sense of abandon comes off beautifully, as heard on 'Arabesque'. At others, it definitely doesn't ('Cry Cry Cry' and 'When I Need a Friend').

Casual Coldplay fans might be disappointed that there isn't an 'Adventure of a Lifetime' or 'Speed of Sound' or even a 'Yellow'-style anthem here. Other listeners will be intrigued by their newfound sense of experimentation. Will they pull it back as they progress as a band, or will they push the 'absolute notions' envelope even further? Who knows. In the meantime, this is fine – although we doubt that it'll go down in the history books as one of their best.

Can you complete the lyrics of these Dolly Parton songs?

5 music-related things to look forward to this year