A rare copy of Ed Sheeran's first demo album, written when he was 13, is up for auction

In fact, the English musician's first official collection of original songs was called 'Spinning Man' and was written and recorded when Sheeran was just 13 - and when his ambitions to become the biggest star on the planet were still just a boyhood dream.

Only 20 copies of 'Spinning Man' were ever released (i.e. burned on his computer) and until now, Sheeran has kept them closely guarded.

‘There are probably 20 copies of Spinning Man in existence, and I have 19 of them," he wrote in his book Ed Sheeran: A Visual Journey . "I don’t want anyone else to get hold of a copy."

Sheeran was staying with relatives and gave the collection to a friend of theirs - and now, having recently discovered it in a drawer, they're selling it to the highest bidder.

The owner's brother, whose name is Kevin, told PA: "My brother put it in a drawer and forgot about it. At the time Ed Sheeran was this just this wee, ginger-haired busker and he thought nothing of it. He didn’t realise he would go on to be one of the world’s biggest pop stars."

According to the listing, the copy of the demo was "Originally owned by the vendor's relative, who worked in the music industry in Dublin, Ireland and who was given the CD personally by Ed Sheeran in 2009."

Sheeran had revealed that the songs on the album - which was named after a painting owned by his dad - were informed by his first experience of heartbreak and mostly about a girl called Claire. Song titles include 'Moody Ballad of Ed', 'I Love You', 'No More War' and 'Addicted.'

"I burnt the CDs myself and made the covers," he said in his book. "There were 14 songs, and they were all songs that rhymed. One lyric went: “I’m a typical average teen if you know what I mean”.

No wonder he wants to keep it under wraps.

The liner notes of the demo album thank his influences 'Damien Rice, Eric Clapton and Jimmy H', and also nod to 'all those who put money into my guitar case in Galway when I busked there last summer, that helped!' It was recorded between December 2004 and January 2015.

'I hope young people can get into my stuff and find something which they can identify with," he wrote. "This is the first collection of tracks I've done and I'm really looking forward to playing them live in concert." 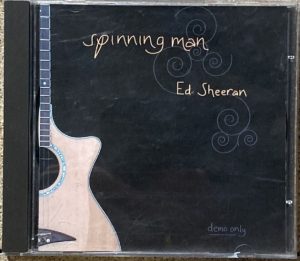 Did Adele refuse to applaud Harry Styles when he won the 'Album of the Year' Grammy?