5 acts to see at Love Sensation festival in Dublin

The LGBTQ+ focused festival takes place at the Royal Hospital, Kilmainham on August 17th and 18th

Love Sensation may be the newest kid on the Irish summer festival block, but that doesn't mean that it's lagging behind with its line-up.

In fact, the music and arts festival – which takes place at the Royal Hospital, Kilmainham on August 17th and 18th and is aimed at the 'LGBTQ+ community and their many friends' - has some seriously impressive names on its bill.

Below, we've picked five acts that you should make it your business to see if you're planning on heading along later this month

She has always been a pop queen, but as her most recent album 'No Shame' proved, Lily Allen is also a survivor. She's been through the mill and come out the other side, but the Londoner still has several bangers up her sleeve when it comes to keeping a festival crowd on their toes. Be prepared to sing along, dance, laugh and maybe even have a little cry.

Her milkshake may bring all the boys to the yard, but will it also bring the boys and girls to the stage? You'd be crazy to miss the inimitable New Yorker's set, given the number of hits she's had over the years and her sheer force-of-nature live persona. From 'Trick Me' to 'Caught Out There', there'll be plenty of familiar tunes in her set.

If you've ever seen Beth Ditto live, you'll already be familiar with her magnetic stage presence. The Arkansas indie-rockers reformed earlier this year after splitting in 2016, which is great news for us: it means we get to hear gems like 'Standing in the Way of Control' played live again, which is certainly no bad thing.

A relative newcomer to the Irish music scene over the past two years, you may already have heard Soulé's brilliant recent single 'Love Tonight' - especially if you're a 'Love Island' fan (it soundtracks that VaVaVoom ad that's always on the ad breaks). The Dubliner's brand of electro-laced r&b is irresistible and she should be a superstar, so check her out before she blows up internationally.

If you've ever been to The George of a weekend night – particularly the famous drag shows/bingo on Sundays – you'll be aware of just how talented the queens at Dublin's most famous gay bar really are. The good news is that several of them are making appearances with their own sets at Love Sensation, including Davina Devine, Shirley Temple Bar, Veda and Dolly Grip. With so many divas in the mix, disappointment is an impossibility.

Love Sensation takes place at the Royal Hospital, Kilmainham on August 17th and 18th. Tickets are on sale from usual outlets now. 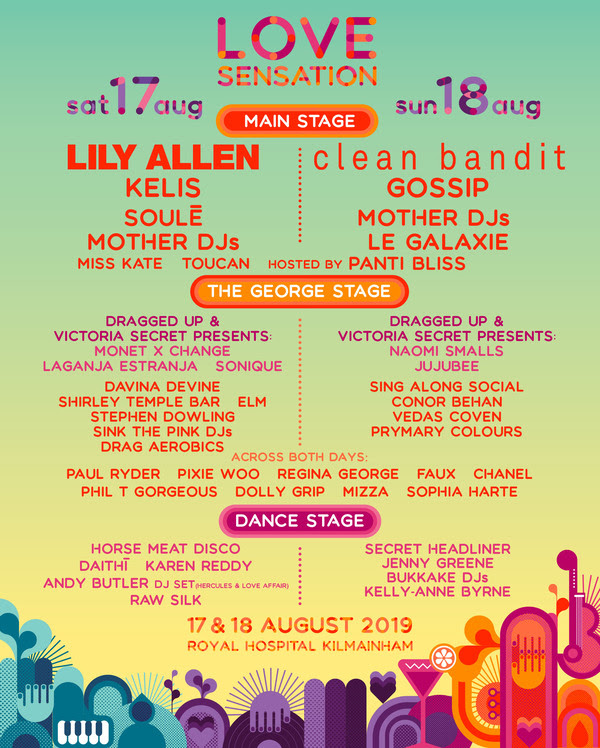 5 big albums to check out in August