Review: Netflix's 'FYRE' documentary is the best thing to ever happen with the failed music festival

The documentary is lit (sorry)

Ja Rule said that FYRE Festival was going to be the "cultural festival of the decade" and oh boy, he couldn't have been further away from the truth.

What's great about Netflix's 'FYRE: The Greatest Party That Never Happened' is that it holds no prisoners. Most people who were involved in the creation of the festival appear on-screen and don't hold back on information.

Starting 5 months out from the announcement of the festival, we're given some background on how the music festival came to be. It turns out Billy McFarlane had created an app, also named FYRE, that was described as the "Uber for booking talent." Essentially, if you wanted to get Ja Rule to perform at your birthday party, you could do just that* (*payment in livers not accepted).

And so, the app evolved from there. McFarlane and Ja Rule, having worked together briefly on the app, joined forces to turn their dream of creating a music festival into a reality. And so FYRE Festival was born, and ballooned into such a beast, that it seems anyone involved was reduced to tears along the way. 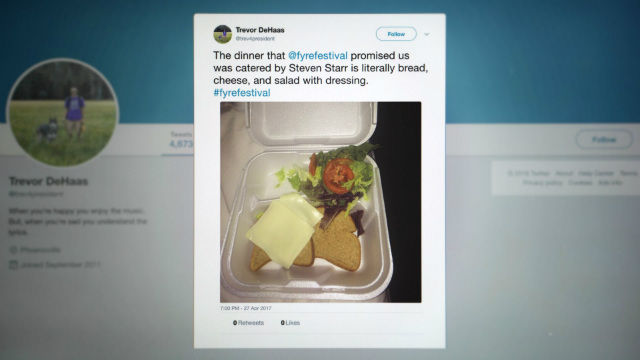 From getting the world's top 10 bikini-clad models to take part in a promotional video; to attendees attempting to flee the Bahamas (and some not even arriving at the festival), the fall from grace of FYRE Festival is something to behold.

The concept of FYRE Festival is perfect for a 90 minute documentary in today's world; 'FYRE' depicts the pure greed that people consume to live the lifestyle they desire. The moment when the attendees arrive to what was essentially a run-down campsite, is pure gold. It makes you feel smug that there's no way in hell you would have ever forked out $4,000 (for the cheapest of tickets), or the never-in-your-life-would-have-done-it $250,000 (for the top range "luxury" tickets) to attend the festival.

However, as eye-opening as the rich attendees misfortunes are, the real drama of 'FYRE' is through the stories of McFarlane's past employees.

Throughout the whole documentary, we get first-hand information from employees of Billy McFarlane. They say how charming, and how likeable McFarlane was, and how they never would have dreamed of his idea becoming this humongous stinker. They also give information on the planning (or the turning of deaf ears) on everything involved in the festival.

Some of the information we are given is, for want of a better phrase, baffling. The accounts from these employees, past and present, makes your realise how easy it is to get sucked into the world of your job - and what you'd be prepared to do for it. One such instance in particular, which involved Andy King the Event Producer, is sure to leave you utterly gobsmacked.

The documentary also deals with the aftermath of FYRE, and what McFarlane did next; which is a whole other story on its own. It also follows what McFarlane failed to do next, with so many people left with the worst taste in their mouth; some left with a harrowing outcome due to the man's actions.

In conclusion, if there's one thing you watch on Netflix this weekend, make it 'FYRE.' From the beginning, it's clear that this documentary holds no prisoners, and goes in hard on McFarlane. It documents the rise of the entrepreneur, who was soaring on a high with his FYRE app and Magnesis card, before sticking his hand into too many pies that he couldn't ever eat. 'FYRE: The Greatest Party That Never Happened' is certainly the best thing to ever happen to FYRE Festival, and you need to see the full story for yourself.

'Spirit Untamed' is here for your Horse Girl Summer needs