Review: 'I Lost My Body' is an ambitious, beautiful animation on Netflix

This animated feature from France is really quite unique

'I Lost My Body' ('J'ai perdu mon corps') follows a severed hand that escapes a lab and searches Paris to find its body. We also follow pizza delivery boy Naoufel (voiced in the English dub by Dev Patel), whose parents died in a car crash when he was young. Living with a jerk roommate and uninterested guardian, he has no one for real company. Still he struggles to make a connection with anyone. He hopes he has found a friend (and love) when he makes a delivery to Gabriele ('Arrested Development' star Alia Shawkat).

Following its win of the Nespresso Grand Prize at the Cannes Film Festival (a first for any animated feature), Netflix quickly acquired the worldwide distribution rights to 'I Lost My Body'. It recognised something special in this French animation, and that's just what the movie is. It's innovative, artistic and haunting. We guarantee it will stay with you long after viewing.

French animation has been increasingly adapted internationally - 'Despicable Me', for example, was animated by the French animation studio Mac Guff (later acquired by Illumination). But 'I Lost My Body' is influenced by anime too, particularly 'Grave of the Fireflies'. While not as bleak as the Studio Ghibli movie, it incorporates similar themes of loss, despair and depression. It also recalls 'Grave of the Fireflies' in its visuals of flies and blood. 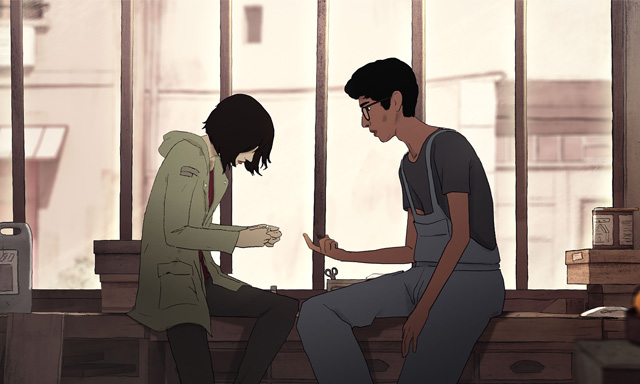 Though the disembodied hand may remind viewers of Thing from 'The Addams Family', this is no happy-go-lucky limb. Its homeless living conditions are tragic; elsewhere, it is struck by wonder as it pauses to listen to piano music. In a peaceful house, it relaxes in a bath tub and cares for a baby; on the streets, it engages in a perilous fight for survival against rats. This hand has quite a personality and ability to adapt - you find you discover newfound appreciation of your own hands.

'I Lost My Body' is full of striking visuals as we track the life of Naoufel. Early on, there's a collage of his hands running through grass and sand, a cut finger. The movie's many textures become absorbed by the viewer and its emotions - love, loneliness, hope - are deeply felt. Its magical realism owes much to being penned by Guillaume Laurant, who previously wrote Amelie. While the ending strikes one as something of an anti-climax, it never takes from the depth and dreamy, surreal quality of what preceded.

Beautiful, heart-breaking and deeply contemplative, this animation is definitely geared at more mature audiences and not children. It is quite unlike any other film you've ever seen before and one of Netflix's most ambitious movies to date.

'I Lost My Body' lands on Netflix on Friday, 29 November.

Here are the Young Men