Plus, Meryl Streep is a wonder

Based on the Tony-nominated Broadway musical by Chad Beguelin, Bob Martin and Matthew Sklar comes Ryan Murphy’s movie take on 'The Prom'.

Transporting us to a town in Indiana, 'The Prom' starts off by introducing us to Emma Nolan (newcomer Jo Ellen Pellman), who is a high-school senior banned from taking her girlfriend Alyssa (Ariana DeBose) to her school's end of the year prom. Mrs. Greene (Kerry Washington) is the old-fashioned head of the Parents and Teacher's Association, who was the driving force behind the campaign, and school principle Mr. Hawkins (Keegan-Michael Key) remains powerless in the matter. On the flip side, we meet Broadway stars Dee Dee Allen (Meryl Streep) and Barry Glickman (James Corden) who have just opened their newest show about Eleanor Roosevelt - but the reviews are scathing, and they find themselves unemployed yet again. Enter chorus girl Angie Dickinson (Nicole Kidman) and washed-up actor Trent Oliver (Andrew Rannells), and the four Broadway stars hatch a plan to make a publicity stunt; they're going to travel to Indiana, save this young teenager's prom, and finally earn themselves a credible reputation in "the biz" yet again.

If you're a fan of anything Ryan Murphy touches ('American Horror Story', 'Pose', 'Hollywood', and his most recent Netflix series 'Ratched'), then chances are you already know that 'The Prom' will be up your street. Everything about it screams "Murphy" in colourful block capital letters - from the eye-catching wardrobe, to the musical numbers dripping in vibrant pinks and blues, and the theme of LGBTQ+ hardship remaining the focal point throughout. Essentially, if you've seen an episode of 'Glee', imagine this as a bumper two-hour special and you've cracked the Murphy code. 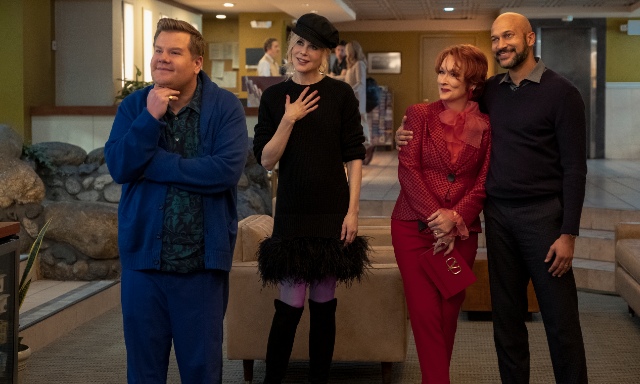 Meryl Streep is the undeniable star of the show, capturing the audience with a string of solo numbers, the best being her entrance into the high school with the hilariously narcissistic 'It's Not About Me'. Corden attempts to steal the limelight in far too many scenes and manages to get a few laughs in - but one can't help but be taken out of the moment. He is a straight man playing the role of a gay man who carries a heavy, touching side plot. You wonder if he was the first choice for the role. Kidman and Rannells are underused and feel more shunted to the sides at times, which is a pity for two powerhouses who have appeared in the likes of 'Moulin Rouge!' and 'Nine'; Rannells' impressive Broadway back catalogue ('Hairspray', 'Jersey Boys', and 'The Book of Mormon' to name a few) speaks for itself too.

With musical numbers aplenty to keep you entertained, 'The Prom' does hit certain highs for musical fans. Each of the main cast gets at least one solo number to themselves, and the final showstopper is an ensemble number to end all ensemble numbers. The spectacle can struggle at times with pacing, as well as being a bit too clichéd and safe - but hey, it's a musical. The storyline is adorable, relevant, and positive enough that any flat notes along the way are quickly forgotten about.

All in all, while 'The Prom' isn't necessarily a showstopping musical masterpiece, it does leave you with a satisfying, overly-colourful taste in your mouth. With runaway performances from Meryl Streep, the underused Nicole Kidman, and the rest of the supporting cast, it's a title that all of the family will enjoy watching this December.

'The Prom' will be in select Irish cinemas this December and available to stream on Netflix from December 11.