It's a very, very silly movie

There's a new drug sweeping the streets of New Orleans - "power pills", which give their users unpredictable superpowers for five minutes. Frank (Joseph Gordon-Levitt), a cop, is taking the pills to "level the playing field" against the bad guys. His dealer is a teenager named Robin (Dominique Fishback), who has a run-in with Art (Jamie Foxx) and ends up being taken along his quest to find his daughter.

With its premise based on pills that make people fast and strong - but only if they have a "good power"; those with bad powers literally explode - 'Project Power' is basically trying to be a superhero movie without being a superhero movie. If its concept appears silly, its execution is more so. In fact the movie is Netflix's silliest feature in a very long time. And this coming just weeks after 'The Kissing Booth 2'.

One of the first scenes sees a guy who is on fire (again, literally) chase Jamie Foxx around his apartment. His name is Newt, by the way, and he owns an alligator. Then there's a naked invisible man who runs through the streets after robbing a bank. Later a woman, and they actually say this, with "powers like 'Frozen'" seems to be getting off on her new found abilities. It's all just so weird, but not in any way that's remotely appealing. 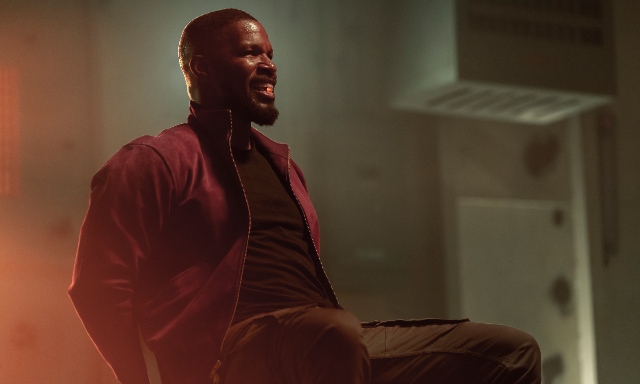 The standard of CGI is really abysmal, and they load the film with killings because violence equates good action, they seem to think. Its try-hard soundtrack is loaded with songs about drugs (One recalls 'The Devil Wears Prada' line "Flowers? For Spring? Groundbreaking") with the number that closes the film out being (and I actually sighed out loud hearing this) "My Word is My Power". And yes its lyrics are as on the nose and wanky as such a title would suggest.

Baffled was the overriding emotion this reviewer felt during the film. At several points, you're asking yourself, "What am I even watching?" While it's great to see Joseph Gordon-Levitt back on the big screen (even with those corny Clint Eastwood impressions he's forced to do),  Dominique Fishback is sweet, and Jamie Foxx shines through as a great actor, even if you don't really get his character (Art keeps changing his personality as if the writer Mattson Tomlin, who's worryingly working on the upcoming 'The Batman', by the way, doesn't even know what the heck he's doing), they can't pull off what is just a poor, poor movie.

There's something so basic and juvenile about its concept and special FX, and yet it's too violent for kids. I don't know who the heck this movie is for. Its only superpower is that, since it exists on Netflix, it'll probably be watched by millions globally, no matter what the reviews say.

'Project Power' is streaming on Netflix from 14 August.