It's all about believing

Taking a leaf out of potentially every single Christmas movie known to the world (which isn't necessarily a bad thing), comes Netflix's newest movie that the whole family can get behind.

Transporting us to the town of Cobbleton, 'Jingle Jangle: A Christmas Journey' follows the story of one inventor, Jeronicus Jangle (Forest Whitaker). Beginning from when he was a young and successful toy-maker, his storyline turns from magical to one of heartbreak and misery. You see, his trusted apprentice Gustafson (Keegan-Michael Key), fed up of playing second-fiddle in Jangle's toy shop, steals his book of inventions as well as his newest creation - a toy named Jon Juan Diego (voiced by Ricky Martin) - and opens up a rival store. Many years later, after his business crumbled and various other unfortunate happenings, we are reintroduced to Jangle 30 years later, a shadow of his former self. You see, he's lost all belief in himself. But his granddaughter Journey (GET IT?!) (played by newcomer Madalen Mills) shows up just in time to help the once-famous toymaker find himself again and have a magical Christmas.

Lots of singing, dancing, and quirky magical robots later, the result is that 'Jingle Jangle' is an all-round festive adventure that pretty much ticks all of the Christmas movie boxes. 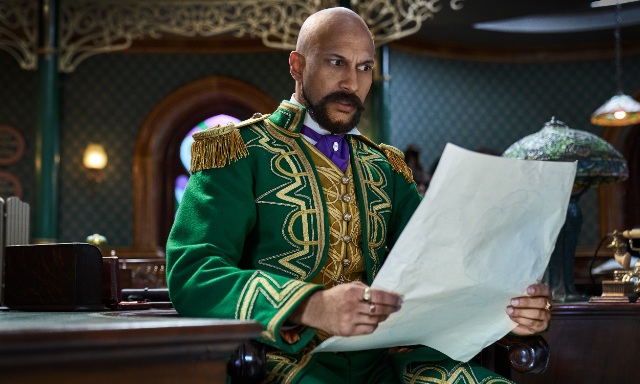 When the end product turns into is something very familiar, but also incredibly fun, it's worth turning your head the other way and just going along with it. There's an essence of many other Christmas-themed movies and musicals cloaked in disguise here, but none more so than 2017's 'The Greatest Showman' starring Hugh Jackman. From the costumes, to the set, and the anthemic show tunes, the movie appears to have heavily influenced 'Jingle Jangle'.

The movie's impressive main cast do justice to what they've been given, and it is at times a thoroughly enjoyable delight to watch. From the imagination of writer/director/producer David E. Talbert, the film features a range of original songs penned by John Legend, Philip Lawrence, Davy Nathan, which one of the tracks, 'This Day' is performed by Usher.

One downside to 'Jingle Jangle' is that it may be slightly too long for younger ones watching, with a running time just shy of two hours. However, there should be enough magical toys, excitement and singing to keep most of the family entertained. The animation used throughout the movie to forward the story along is also worth a mention, for being such a wonderous animation.

A familiar storyline wrapped up in all things musical and magical, 'Jingle Jangle' streams on Netflix from November 13.