Based on the book series by Nancy Springer, 'Enola Holmes' follows the adventures of the little sister of renowned detective Sherlock Holmes (Henry Cavill) and Mycroft Holmes (Sam Claflin). While her brothers have been off doing busy, important work for the nation, Enola (Millie Bobby Brown) has adored having the affections and attention of mother Eudoria (Helena Bonham Carter) all to herself. They do everything together from reading and playing tennis, to practising archery and combat. But Enola becomes increasingly aware that her mother is hiding secrets. Then one day, Eudoria vanishes. When her brothers prove to be little help, Enola sets off to uncover the mystery of her mother's disappearance on her own. She ends up uncovering a great conspiracy.

'Enola Holmes' has made its way to our screens via Netflix. And what joy it brings to these uncertain, often gloomy times! The feature plays like a classical adventure film from one's youth. Think more 'The Goonies' than previous iterations of Sherlock Holmes. It's charming and old-school with its talent both in front of and behind the camera shining through.

Harry Bradbeer ('Fleabag') directs with zest while Jack Thorne's ('Wonder', 'His Dark Materials') script is sharp and entertaining. The story takes you on a journey with unexpected, exciting twists and turns. The emphasis is more on the fun and adventure as opposed to the mystery element, not that you'll mind as its sense of gusto is wholesome and winsome. 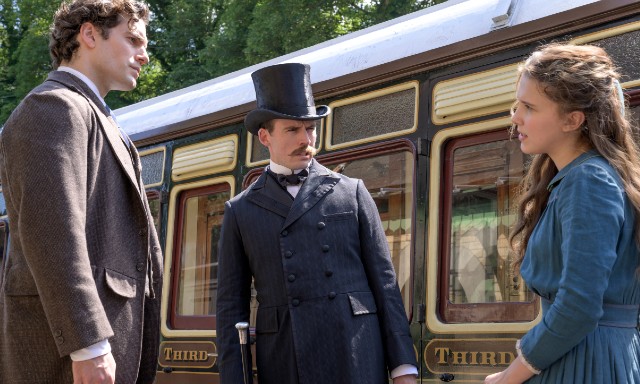 Millie Bobby Brown is nothing short of fantastic in the titular role. She establishes a playful, personal relationship with her audience through frequently breaking the fourth wall. Having become renowned for playing Eleven on 'Stranger Things', her Enola is very different - cheeky, energetic and enthusiastic. She's absolutely delightful.

In the supporting roles, Helena Bonham Carter’s performance as the mother is fittingly warm, while Claflin plays another bad guy. Cavill doesn't exactly leave his mark as Sherlock but he looks the part. In any case, this is Enola's show, not his. It's also fun to see Fiona Shaw, who's been fabulous in 'Killing Eve' of late, play a character that recalls her 'Harry Potter' roots.

As well as engaging in what could be deemed a Brexit commentary, the feminist message of the feature is strong. It explores a changing world in which women are rebelling against being kept as homemakers for too long. There are also a few scenes in which the emergence of Millie Bobby Brown as a young woman are really admirably and deftly handled, celebrating her femininity and clapping back atthe infamous way that social media has critiqued her in the past.

'Enola Holmes' is a great family movie too, though it does get a little bloody at one point late in the film. As long as no legal matters arise (the fate of the film appeared to be in jeopardy for a time when the Conan Doyle Estate filed a lawsuit against Netflix, claiming copyright violation), it will no doubt hail the beginning of a new movie franchise. And one with a bright future ahead.

'Enola Holmes' is streaming on Netflix from Wednesday, 23rd September.