Zac Efron is already in, but who will play the roles of Steve Gutenberg and Ted Danson?

With news breaking earlier this week that a remake of '3 Men And A Baby' is officially underway with none other than Zac Efron in the lead role, one has to wonder who the other two men will be.

Obviously, the original movie is a classic that is unparalleled in the realm of fish-out-of-water comedies directed by 'Star Trek' alumni. Not only that, it gave Steve Gutenberg his most famous role outside of Mahoney in 'Police Academy' and helped to secure Ted Danson's place in popular culture as Guy With Great Hair.

So far, there's been no word on further casting for the remake, so with that in mind, we'd like to offer up our services as casting directors free-of-charge to the good people at Disney.

This feels like it's already locked in stone. For one, they're both actors with great hair and effortless charisma. Plus, it's not hard to imagine Joe Keery playing a self-involved asshole actor with a heart of gold, seeing as how he played a self-involved asshole teenager with a heart of gold in 'Stranger Things'. Better yet, have Ted Danson cameo in the thing as his father who comes to visit, like in the original.

Let's be fair. Out of the three men in the title, Steve Gutenberg's role was somewhere in the middle and not terribly important. OK, fine, he was an animator and he was the one who helped to keep the baby happy with his puppets and stuff, but generally, he fell between the cracks with Tom Selleck and Ted Danson. This role, in other words, is a blank slate for anyone, and someone like Will Poulter is worth a go. Why? Well, for one, he's got a great sense of comedic timing and you only need to watch something like 'We're The Millers' to get that.

Considering the kind of career trajectory Florence Pugh is on at the minute, this role might be a little bit too small for her, seeing as how Nancy Travis' character was only in the movie for all of maybe ten minutes. Still, the role requires an English actor and a fairly recognisable one, so why not her?

WILLEM DAFOE / BABY, OR THE GHOST THAT APPEARS IN THE BACK OF THE WINDOW

Willem Dafoe proved that he could make any kind of role his own with 'The Lighthouse'. Seriously, who thought a crazed lighthouse keeper would be the role Willem Dafoe would absolutely make his own? Or what about something like 'The Florida Project', or even 'Spider-Man' for that matter? Yes, the role was originally played two now fully-grown women, but come on. Williem Dafoe could make this. Cast Willem Dafoe as the Baby, you cowards. If nothing else, cast him as the ghost that appeared in the back of a window. 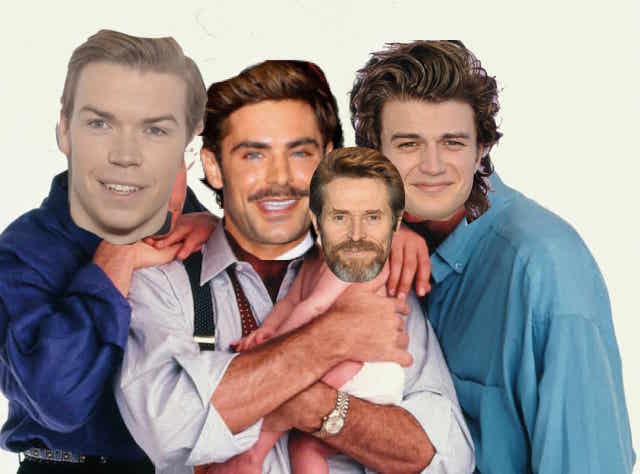