The A to Z of Star Wars

Now that the world is gripped in Star Wars-mania, you might find yourself a little bit out of the loop.

Although you don't need to know the difference between an A-Wing and Z-95 Headhunter or Tatooine and Dantooine, there are some essential bits of information you should have that'll help you out to get a better understand.

So, with that in mind, we've come up with an A to Z of Star Wars just for you. Take a look!

A is for ADMIRAL ACKBAR

That's this guy. One of the leaders of the Rebel Alliance, he's the guy that shouts "IT'S A TRAP!" in Return of the Jedi. If you ever see that phrase, this is what it means.

B is for BOBA FETT

A ruthless bounty hunter, Boba Fett was introduced in The Empire Strikes Back and soon became a fan favourite. However, he met a fairly ignominious end in Return of the Jedi when he fell into the Pit of Carkoon after Han Solo knocked on his jetpack by accident.

Also known as Threepio or Goldenrod, C3PO was built by Anakin Skywalker in The Phantom Menace and has featured in every single Star Wars movie. (See R2D2)

A massive space station that had the ability to destroy planets with a single beam, the Death Star was the Galactic Empire's grand design for keeping the galaxy under its control. After it was destroyed in A New Hope by Luke Skywalker, the Empire tried to build another in Return of the Jedi. That one was blown up by Lando Calrissian piloting the Millennium Falcon.

E is for EMPIRE

F is for FORCE

A mystical energy that gives people who are sensitive to it unique powers, such as telepathy (mind-reading), superior speed and strength, telekinesis (move stuff without touching it) and in some cases, the power of flight and the ability to shoot lightning from their hands. The Force is split into two sides - the Dark Side and the Light.

G is for GREEDO

A small-time bounty hunter who was shot dead by Han Solo on Tatooine. The big debate with fans is over who shot first, Han or Greedo. George Lucas didn't want children thinking it was a good thing that Han Solo shot Greedo first without warning, so he digitally altered the scene for the 1997 re-release to make it more noticeable that Greedo shot first with Han returning fire.

H is for HOTH

The ice-planet where the Rebel Alliance is hiding at the beginning of The Empire Strikes Back. The opening battle sequence, with the giant armoured walkers and snowspeeders, is set on the tundras of Hoth. In reality, the scenes were shot in Norway and on a set in Shepperton Studios, England.

I is for INDUSTRIAL LIGHT & MAGIC

J is for JEDI

The Jedi were wiped out by Emperor Palpatine and Darth Vader at the end of Revenge of the Sith. Obi-Wan Kenobi, one of the few surviving Jedi Masters, hid on Tatooine to escape the Empire. It's there that he meets Luke Skywalker and begins to train him in the ways of the Force. At its height, there were thousands of Jedi Knights but by A New Hope, there were only a handful remaining who lived in secrecy.

K is for KAMINO

L is for LIGHTSABER

An elegant weapon for a more civilised age, the lightsaber was the weapon of choice for the Jedi. There's been a few variations on it, including Darth Maul's double-edged lightstaff and Kylo Ren's claymore-inspired one from The Force Awakens. Usually come in one of three numbers - blue, green or red. Blue and green are good, red's bad. Samuel L. Jackson specifically requested a different colour lightsaber - purple - in Attack of the Clones. Another trivia bit - his lightsaber had BMF inscribed on the bottom of it. BMF stands for Bad Mother Fucker.

M is for MILLENNIUM FALCON

Han Solo's personal ship, it was designed with parts from a Ford Galaxy (really) and based on the shape of a half-eaten burger (again, really) and a gherkin. Can do the Kessel Run in twelve parsecs and has a ropey hyperdrive. Looks cool as shit. 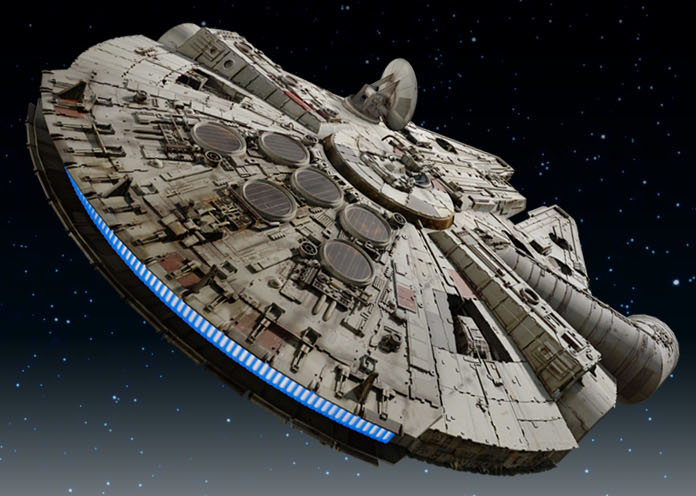 N is for NIEN NUNB

A minor character in Return of the Jedi, he became a fan favourite and a character in countless comic books and novels that followed the original trilogy. Looks like... well... y'know...

O is for OBI-WAN KENOBI

Also known as Ben Kenobi, he was one of the few remaining Jedi Masters who survived the Galactic Empire's purges at the end of Revenge of the Sith. He was killed by Darth Vader in A New Hope and returned in The Empire Strikes Back and Return of the Jedi as a spirit that guided Luke Skywalker through some tricky moments. Played by Alec Guinness in the original trilogy and Ewan McGregor in the prequel trilogy.

P is for PADAWAN

A Jedi's apprentice is known as a Padawan. Only really used in the prequel trilogy.

Q is for QUI-GON JINN

Obi-Wan Kenobi's tutor, he was killed by Darth Maul at the end of The Phantom Menace. Played by Liam Neeson.

The astromech droid who's often paired with C3PO, R2D2 originally belonged to Luke Skywalker's mother before it came into his possession in A New Hope. Beeps a lot.

S is for SKYWALKER / SOLO

Right, we need a family tree for this. Darth Vader's real name is Anakin Skywalker. He assumed the name Darth Vader at the end of Revenge of the Sith after he was nearly killed by Obi-Wan Kenobi. He had two children with Padmé, Luke and Leia, who were raised in secret and without either of them knowing who their father was or that they were related. Luke Skywalker was raised on Tatooine by his aunt and uncle whilst Leia was raised on Alderaan and adopted into the royal family, hence the whole Princess thing.

Han Solo is a smuggler who owns the Millennium Falcon and flies it with the help of his friend, Chewbacca. Although he initially is shown to have questionable morals and only interested in money, he soon finds himself promoted to the rank of General in the Rebel Alliance. He and Leia have a love / hate relationship that eventually blossoms into the real deal at the end of Return of the Jedi.

T is for TATOOINE

The desert planet that features in almost all of the Star Wars movies, it's home to gangster kingpin Jabba The Hutt (that's the slobbery guy that looks like a worm) and where Luke Skywalker was raised by his aunt and uncle. After they're both killed in A New Hope, he leaves with Obi-Wan Kenobi - who was also hiding out there. He returns to Tatooine in Return of the Jedi to free Han Solo who was captured by the Empire and delivered to Jabba The Hutt by Boba Fett. In reality, it was filmed in Tunisia with some of the sets still actually there to this day.

U is for UTINNI

UTINNI! UTINNI! This is basically the only bit of dialogue that comes from the Jawas, these weird little scavengers that live on Tatooine. In reality, they were played by Alec Guinness' young children.

V is for VADER

Darth Vader was born Anakin Skywalker, a slave who was freed by Qui-Gon Jinn and Obi-Wan Kenobi in The Phantom Menace. He was then trained by Obi-Wan Kenobi, however his aggressive and impulsive nature often got him into trouble. By Revenge of the Sith, he was secretly married to Padmé. Jedi were forbidden to marry or have children - he had done both. In Revenge of the Sith, he kept having visions of Padmé dying in childbirth and sought out ways of keeping her alive. Emperor Palpatine, who was secretly a Sith Lord (bad guy), offered to show Anakin Skywalker ways of bringing people back to life if he would renounce the Jedi.

Long story short, he went a bit mad, had a major fight with Obi-Wan Kenobi which ended with Vader being burnt alive and having his legs chopped off. Because his injuries were so severe, he had to have a specially-designed suit made for him that would allow him to walk and breathe. That's where the whole Darth Vader suit came from. In the original trilogy, he was voiced by James Earl Jones (who also voiced Mufasa in The Lion King) whilst the actual person on-screen was played by bodybuilder David Prowse. In the prequel trilogy, he was played by Hayden Christensen and Jake Lloyd.

W is for WAMPA

This is the huge furry thing that attacked Luke Skywalker in The Empire Strikes Back. In reality, the whole wampa sequence was written to explain why Mark Hamill - the actor who played Luke Skywalker - looked so different. A day before A New Hope was due to finish filming, Hamill was in a horrific car crash that severely damaged his face and caused significant scarring.

X is for X-WING

The X-Wing is perhaps one of the most recognisable ships from the series. It's featured in countless videogames, comics, novels - everything. The X-Wing featured primarily in the original trilogy and will also feature in The Force Awakens.

Y is for YODA

Yoda was the most senior Jedi Master and responsible for training countless Jedi. Extremely long-lived, Yoda was 800 years old before he died in Return of the Jedi. Voiced by puppeteer Frank Oz, Yoda became known for his distinctive voice and odd speech pattern. Don't try and replicate it. Really.

Z is for ZERO

The amount of times any of the Star Wars movies has won an Oscar for Best Picture AND THAT'S A TRAVESTY OF JUSTICE.

'Sister Act 3' is still on the way, with Whoopi Goldberg ready to put butts in those seats

Pierce Brosnan on who the next James Bond will be: "I don't care"

Check out the trippy trailer for Alejandro G. Iñárritu's 'Bardo'