Is 'The Rise of Skywalker' taken from a 30-year old 'Star Wars' novel?

There's way too many similarities for it to just be a coincidence.

If you've already watched the latest teaser from D23 of 'The Rise of Skywalker', you'll have clocked a few key images from it.

Obviously, the biggest part is the sight of Rey with a double-edged red lightsaber, but there's a few other moments in the teaser that stuck out. In particular, one scene seemed to show an entire fleet of Star Destroyers, perfectly lined up and seemingly abandoned. On top of that, the Emperor - who was killed off in 'Return of the Jedi' - appears to be back from the dead and getting ready to wreak havoc on the galaxy once more.

It's all big, splashy stuff and the kind of stuff nobody would have expected - but if you read some of the first 'Star Wars' novels way back in the early '90s, it'll look just a little bit too familiar for it to be just a coincidence. In 1990, author Timothy Zahn wrote a trilogy of novels that effectively revitalised 'Star Wars' and helped to create an entirely brand-new continuity in the franchise that was set after the events of 'Return of the Jedi'. 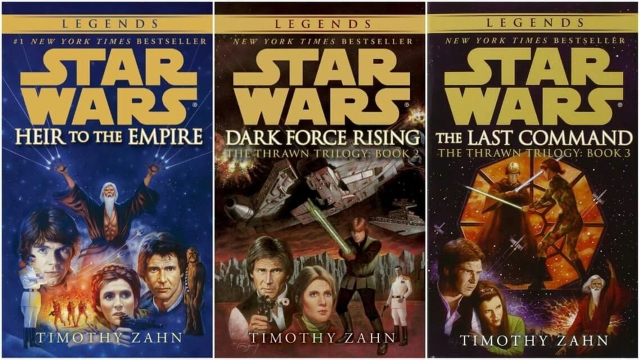 The book covers of the Thrawn trilogy, 'Heir To The Empire' (Left), 'Dark Force Rising' (Centre) and 'The Last Command' (Right)

The first novel, 'Heir to the Empire', was set five years after the events of 'Return of the Jedi' and saw the fledgling New Republic - led by Mon Mothma and Princess Leia - battling the remnants of the Empire, led by a tactical genius called Grand Admiral Thrawn. In the second novel, 'Dark Force Rising', Thrawn - who had joined forces with Joruus C'baoth, the insane clone of a long-dead Jedi Master - was on the hunt for a long-dormant fleet of ships called the Dark Force that had been hidden away during the Clone Wars. The third novel, 'The Last Command', culminated with Luke Skywalker being forced to do battle with a clone of himself that was under the control of C'baoth while the Empire had now taken control of the Dark Force Fleet and was on the verge of reconquering the galaxy.

Any of this sound familiar? 'The Rise of Skywalker' trailer showcases - you guessed it - a dormant fleet of ships in the middle of space that the New Order is trying to take control of. You have a version of Rey who's evil and looks like she's about to attack someone. And, to top it all off, the novels also featured a character who constantly heard the Emperor speaking to her telepathically even though he was long dead. The final novel in the trilogy, 'The Last Command', was a reference to the Emperor's final order that the character - Mara Jade - kill Luke Skywalker.

When Disney bought Lucasfilm, these novels - and every other novel, game, comic, whatever - were classified as non-canon and referred to as "Legends" in their continuity. However, here and there, some of the characters have come back into the Disney continuity. For example, Thrawn is a major character in the 'Star Wars: Rebels' TV series and is voiced by 'Sherlock' alum Lars Mikkelsen, brother of 'Rogue One' star Mads Mikkelsen.

Obviously, since Disney owns Lucasfilm and the rights to all these novels, they can basically pick and choose whatever they want from them and use them going forward. It may just be that there's a couple of coincidences with the lost fleet of Star Destroyers and the basic plot of a book nearly 30 years ago, and the more plausible answer for Evil Rey is that she's a vision Rey sees - like that scene from 'The Empire Strikes Back'. Yet, for all that, there's been endless theories that Rey is herself a clone, in reference to the repeating vision of herself in 'The Last Jedi'.

Either way, all will be revealed when 'The Rise of Skywalker' lands in Irish cinemas on December 19th.