Let's geek out over the clues and symbols in 'Us'

It's the movie everyone's talking about

***SPOILERS AHEAD***
It's kind of extraordinary to think that 'Us' is only Jordan Peele's second feature after the groundbreaking horror 'Get Out'.

In case you're unfamiliar, 'Us' follows a wife and mother-of-two (Lupita Nyong'o) on holiday with her family in Santa Cruz. The beach vacation turns horrific when a family of doppelgängers begins to terrorise them.

Written as well as directed by Peele, 'Us' has inspired nationwide discussions. What exactly is the film's meaning? Is it about identity and displacement? Or trauma and redemption? Alternatively, is it about capitalism? And what exactly is it saying about the USA? After all, when the doppelgängers are asked who they are, they answer "Americans".

Then there was that twist ending.

So if you've seen 'Us', you'll know that it turns out that N'yongo's character Adelaide is actually a doppelgänger, having switched places with her real-life counterpart as a child at the opening fairground scene. While the revelation comes only in the finale, there are hints as to Adelaide's true identity throughout the film as well as heavy uses of symbolism.

There are numerous uses of mirrors and reflections in the film, especially involving Adelaide. For example, when she tells her husband about what happened to her as a child, the camera goes to her reflection in the window. In the basement, she looks in the mirror and sees herself practising ballet as a child. Later, her 'doppelgänger', also known as Red, shoves her face into the living room table which is shiny, so again her reflection is apparent. And let's not forget the hall of mirrors at the fair she went to that started it all.

There are also numerous instances of copies used from early on in the films. However, it's worth noting that they're copies which are alike but not exactly the same. This can be seen in early shots of rows of suburban houses and the shot of the rabbits which plays alongside the opening titles. Similarly, the doppelgängers or 'shadows' are alike but not identical. They look like they're counterparts, and yet are neither the same nor the opposite. Likewise, a mirror reflects back the image of a person. But it isn't itself a person. 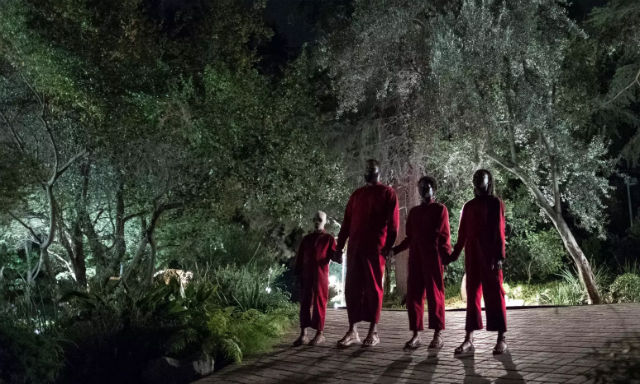 Adelaide is not what she appears

Adelaide's sub-human nature first becomes apparent when she's in the basement and sees herself as a child in the mirror. A strange expression comes on her face in this moment which is neither fear nor joy but something else entirely. Then again, you could argue that the first hint that she's not who she appears comes even earlier, when she tells her friend, played by Elizabeth Moss, that she struggles with communication.

Later, Adelaide's behaviour is more obviously akin to the doppelgängers. She demonstrates animalistic breathing as she attacks and kills the doppelgängers, which is how they communicate. Adelaide is also the only family member who uses the doppelgänger's scissors against them. She uses the scissors efficiently, as if they come naturally, but upon being observed stabbing someone by her daughter, she abandons the weapon for fear of arising suspicion. 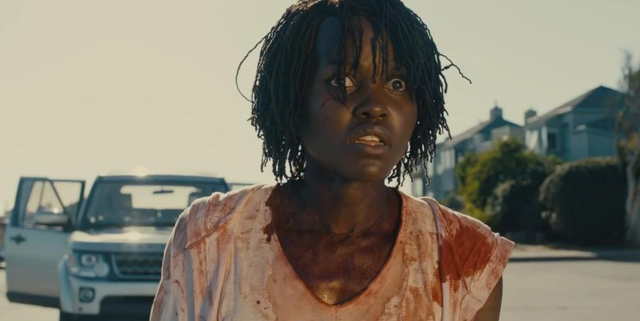 Adelaide is also the only one who senses the arrival of the doppelgängers. Arguably, her fear arises less from the fact that they could kill her and that the real Adelaide is going to take her children - and life - back from her. Adelaide has a different relationship to the doppelgängers than the rest of the family. While her husband and daughter have a kill or be killed attitude, it is apparent that Adelaide has some kind of connection to them. When the daughter doppelgänger is dying, she calms her, and even reaches out to touch her. Later, she cries out in horror when the son doppelgänger dies in the fire.

There's also an apparent connection between Adelaide's son and his doppelgänger. When alone, the latter does not try to kill the former but rather demonstrates a curiosity. The connection that the two share is also apparent when Adelaide's son is able to walk backwards forcing his doppelgänger to copy him and kill himself. One wonders what happened off screen when Red takes him away - did she tell him the truth? He definitely gives his 'mom' a look that suggests he knows the truth at the end. In fact, in another lifetime, maybe Adelaide's son's doppelgänger might have made the same move as Adelaide, switching with his real life counterpart our of curiosity (after all, he's about the same age as Adelaide was when it happened). Then again, he couldn't have pulled it off because of the scar on his face.

Aside from masks, t-shirts are also pointedly used in the film. Following an ad depicting the 1986 'Hands Across America' initiative, young Adelaide is seen wearing a t-shirt depicting the campaign. Later, she arranges her toys in the psychiatrist's office in a visual callback to the initiative. The proceeds raised from 'Hands Across America' were intended to combat poverty and homelessness, but it was a major financial failure.

Adelaide also wears a 'Thriller' t-shirt in the fairground scene. Then, when the doppelgänger swaps places with her, her own life quickly turns into a horror,  just as it does in the music video. Moreover, at the end of 'Thriller', Michael Jackson is revealed to not be the human he appears to be (same as Adelaide). Adelaide's son, meanwhile, wears a 'Jaws' shirt. Both 'Us' and Spielberg's blockbuster follow families on a summer beach holiday which go horribly wrong. As with 'Jaws', the threat is lying beneath the surface.

Another notable use of clothing is Adelaide's attire. She wears a white shirt but as it becomes more blood-splattered, it gets more and more red. This is the same colour worn by the doppelgängers.

The power of speech

When Red confronts Adelaide in the underground subway, there's a moment when she bangs the table and says something. While inaudible to the audience, it makes Adelaide look truly terrified. Perhaps this is when the truth comes out, but it's not revealed to the audience until that final scene. 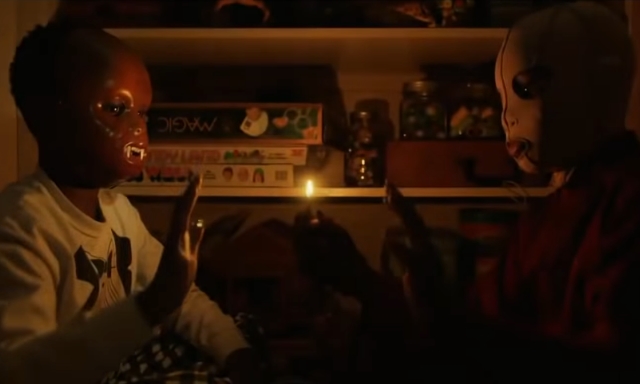 Read our movie review for 'Us' here.