Get your butts below the hard deck.

In Defence Of... is a our series of articles where we'll step in and try defend - operative word is 'try' - films that have been unduly lambasted and unceremoniously dumped by critics and audiences alike. This week, it's the film that made Tom Cruise into an international star and made everyone want to join the Navy. The all-American, Cold War-era blockbuster 'Top Gun'.

Let's get the obvious bit out of the way. Sure, you can read 'Top Gun' as some kind of homo-erotic romance. All the signs are there. The volleyball scene, the various pilots talking about getting hard-ons when they're talking about missiles, phallic-looking missiles, and overcompensating callsigns like Maverick, Goose, Hollywood, Slider and Viper. Yes, there is no denying that 'Top Gun' has all of these things and then some. It's easy to look at 'Top Gun' from the all-knowing viewpoint of thirty-odd years and see all these things and many other things - particularly just how jingoistic it all was.

A number of other directors were lined up before Tony Scott took on the role. John Carpenter was one, and when asked (by us, incidentally) about the film, he was typically blunt in his opinion of the film. "They fight the Russians in the third act? Come on now. There'd be World War III. Stop that. Come on... It's weird... it's such a weird movie." 'Top Gun' is a weird movie. Like 'Batman Forever', like 'Con-Air', 'Top Gun' acts a perfect time-capsule of a film. It so clearly speaks to '80s America, and specifically Reagan's America. While the film doesn't make much of the Russians - they only appear at the beginning and the end of the film - what it does is making it about the striving and competition in Reagan's America.

The very concept of the film is the very best of the best battling it out to see who wins. In other words, it's survival of the fittest. Ronald Reagan was often described by political commentators of the time as adhering to Social Darwinism.. More pointed was the fact that Reagan was trying to dress up the idea of American expansionism as a rollicking military adventure. Just three years before 'Top Gun' was released, Reagan ordered US forces to invade Grenada. One month and a day before 'Top Gun' was released, Operation El Dorado Canyon took place and saw 45 American aircraft bomb military targets in Libya. The US Navy set up recruitment booths right outside cinemas when 'Top Gun' was shown. Numbers joining the military as a whole spiked.

There's no doubting that 'Top Gun' was a propaganda movie for the US military, in other words. After all, the best propaganda movies make it seem like an adventure. 'Top Gun' was exactly that - a huge adventure, made by a slick director cleverly attuned to the mindset of the consumer. Before Tony Scott directed 'Top Gun', he and his brother Ridley set up Scott Free Productions and made some of the most iconic TV advertising campaigns of the '80s. It's all about the visuals, the set up and the pay-off - and showing the product in the best possible light. 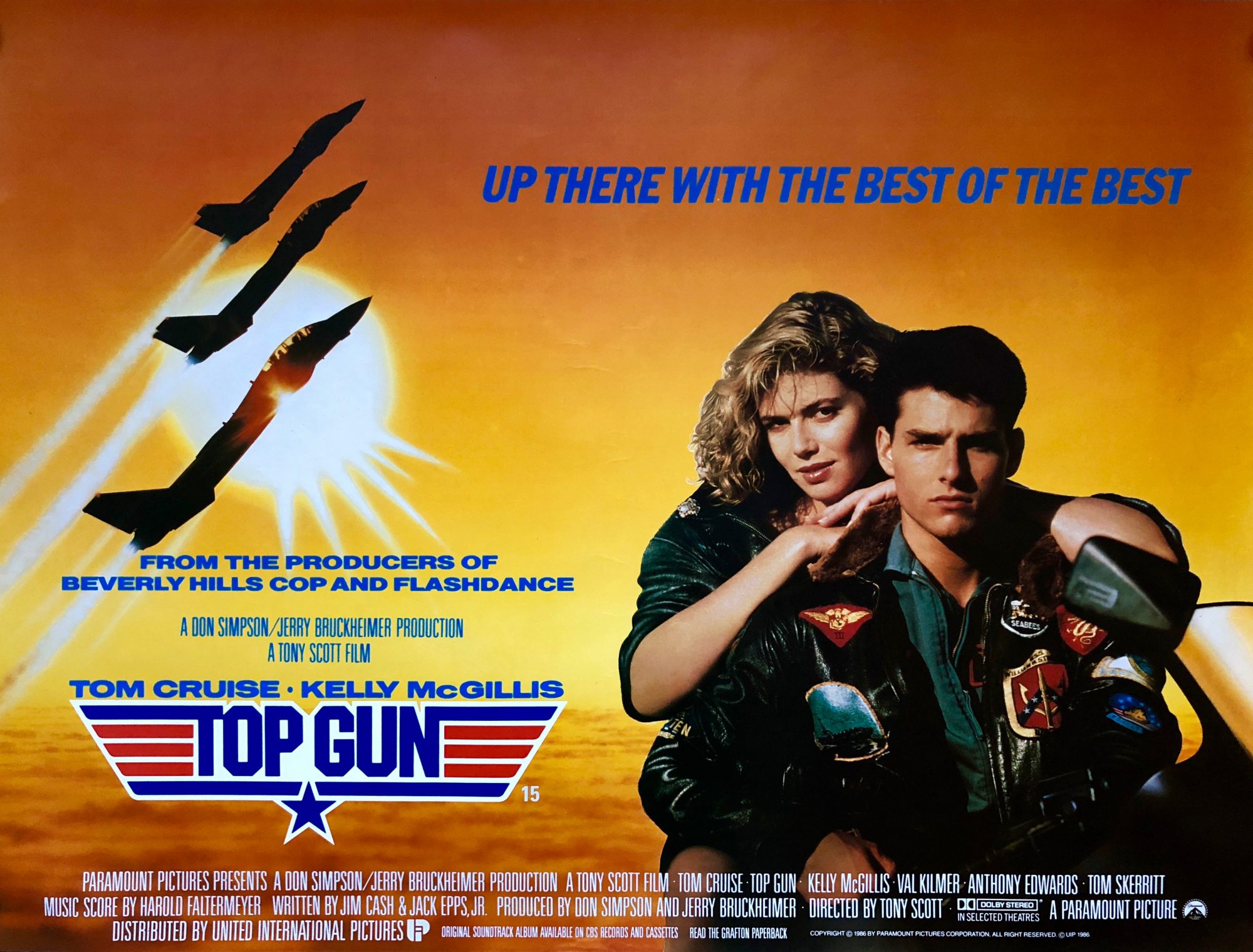 When you look at 'Top Gun', it looks and sounds like a two-hour recruitment video. There's the scorching soundtrack with the likes of Kenny Loggins, Journey, Harold Faltermeyer and Berlin, the glamorous Kelly McGinnis - who was based on a real-life mathematician called Chrstine 'Legs' Fox. And, of course, Tom Cruise. The fighter jets look fast and glisten in the sunlight. Scott's use of aerial photography and editing hurls the film through the air with ease.

Thirty years on, the dogfight scenes between Maverick and Viper, or Iceman and the MiG-28 at the end, still hold up. There's an alacrity to the whole story, with no time for realism or thought. You strap in, take off and enjoy the ride. It's loud, it's fun, it has no awareness of how stupid it is. If you're able to, you can switch your brain off and enjoy the spectacle without any of the problematic undertones.

On the basis of it being used a recruiting tool and giving a completely unrealistic take on military life, 'Top Gun' works brilliantly. As a technical demonstration in how to shoot and cut an exciting blockbuster, it works just as well. Tony Scott's precision with the emotional beats in the film are like something out of a sports film. The hero's cocky self-certainty is met with adversity and goes down, when he's unsure of himself. But then he picks himself back up just when he's needed and triumphs in the end.

It's basically Rocky with an F-14 Tomcat in the way. You can't deny that Top Gun isn't entertaining, because it's so over-the-top that it can't be taken seriously. What's more, the idea of trying to make a sequel for it just isn't going to work. You can go back and look at 'Top Gun', chuckling at the concept and how cheesy and earnest it is. But can it work again with Joseph Kosinski behind the camera and Tom Cruise back in the cockpit? In the wake of two wars and everything that's happened in American foreign policy since then?

If there's anyone who wants it to work, it's Donald Trump. His son, Donald Trump Jr., once posted a meme on his Twitter account that saw the President's face superimposed over Maverick's as he shot down a plane with CNN on it.

You can check out our interview Dublin Lord Mayor Hazel Chu on 'The Revisit', where we discuss some of these topics and much more.