The demand for next-gen consoles has seen a rise in online scalping.

It's still an incredibly shitty thing to do, of course, and just further underlines how the internet was a mistake and people can be greedy assholes if given half the chance.

People who have come into possession of a PS5 or Xbox Series X/S are now selling said consoles on eBay for more than double the price they paid. In some cases, bids have hit close to $1,500 to $2,000 for the disc version of the console.

On eBay as of writing, there are somewhere in the region of thousands of consoles being offered for sale by scalpers, with the average price for a disc version of either console going for $1,200 - more than double the retail price. 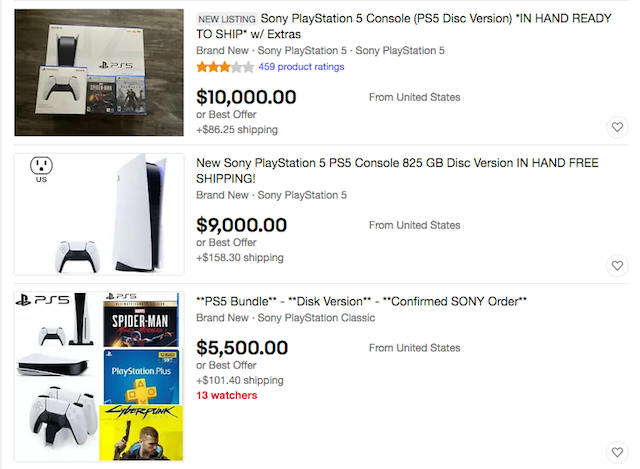 In a few cases, PS5s have been offered for upwards of $5,550 and, in one auction, a bundle with 'Assassin's Creed Valhalla' and 'Spider-Man: Miles Morales' is being offered for $10,000.

While this is happening on eBay currently, Amazon has suspended all third-party sellers of the PS5 in an attempt to stop scalping and price-gouging. Retailers in Ireland have had to contend with the fact that not all pre-orders have been fulfilled until after Christmas, which is further driving people eager to get their hands on the next-gen consoles to online scalping.

Why is it so difficult to get a PlayStation 5?

Ranking the 'Mortal Kombat' games from worst to best

Here are the four games for this month's PlayStation Plus

'Final Fantasy VII Remake' is getting a PS5 upgrade