Hands on with the Google Stadia

Can the Google Stadia stand the test of time?

We had the opportunity earlier this week of getting hands-on experience with the Google Stadia platform, and boy was it exciting.

Ahead of the Premiere Pack’s release in Ireland and 13 other territories on Tuesday the 19th of November 2019, Google Ireland held a private pre-release event of the platform. From launch, Stadia will feature 22 titles such as 'Red Dead Redemption 2', 'Mortal Kombat 11', and 'Just Dance 2020', to name but a few.

From my 45-minute playtest with Stadia I must say, I was pleasantly surprised and impressed. The interface is easy to navigate, simply designed, and stylish. Across all screens available to play on, that interface remains consistent. Drop-in, drop-out play on those screens isn’t as seamless as picking up a different device and continuing immediately - you still have to boot the game on the new device – but save states are, meaning you can go from playing for hours on your home TV and pick up right where you left off on the go, on another TV screen, or anywhere really.

The controller itself is comfortable and easy to get used to in terms of button placement. Its design seems like a marriage between the shape and size of an Xbox controller, with the analogue stick placement of a DualShock. Stadia’s controller is pretty much the only piece of hardware you need to play apart from the Chromecast Ultra needed to stream to TV, which means that the platform is super portable. 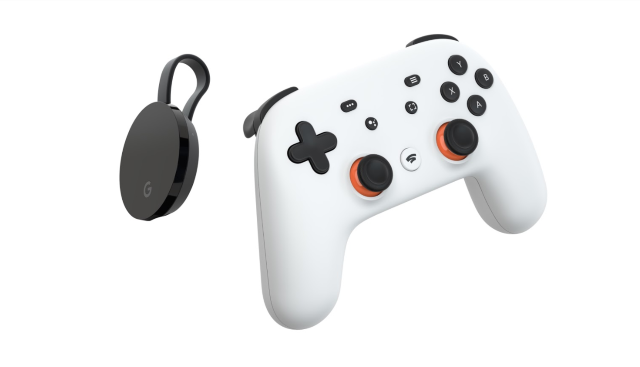 The Google Stadia controller and the Google Chromecast Ultra

'Gylt', the Stadia exclusive title developed by Tequila Works whom you may know from 2012’s 'Deadlight' or 2017’s 'Rime', took up much of my session purely out of interest. It’s a nightmarish stealth adventure game that takes inspiration from something like 'Alan Wake', and mashes it together with smooth Pixar-esque animation.

Most of my playtime was spent on the TV screen, which was streaming in 1080p resolution. The graphics were on par with existing consoles that games like 'Red Dead Redemption 2' and 'Mortal Kombat 11' are presently available. I didn’t feel as though there was any lag on the stream, or from my inputs even when playing a super-fast button masher like 'Mortal Kombat 11'. Granted, I was playing on Google HQ corporate Wi-Fi which may have had some part to play in the form of a high-speed connection. That being said, I was pointedly informed pre-session that the building-wide connection wasn’t optimised in any way for videogame streaming.

To test other screens, I was given the Google Pixel 3 smartphone wired to the Stadia controller and attached with what Google calls "The Claw". This is essentially a phone holder that attaches to the Stadia controller for gaming on the go. While it feels a bit funny at first to play like this, I can imagine you’d get used to it quickly, and there’s something to be said for being able to play portably with a full-sized ergonomic controller. At launch, the controller must be wired by USB to a compatible smartphone, but wireless playing is coming down the line. Don’t get your hopes up if you’re an iOS user though, as there has thus far been no announcement made on compatibility with the software.

Further from that point, there are some features unavailable from day one - Google Assistant and YouTube integration for example. These will be updated and available at a later date, but for now Google is focusing on ensuring the Stadia’s core proposition of videogame streaming is operating to perfection.

The Premiere Pack (€129 from the Google Store), launched yesterday, consists of the Stadia Controller, a Chromecast Ultra, and a 3-month subscription to Stadia Pro – but not "The Claw" attachment which must be bought separately. Right now, the only way to play your Stadia is with the Stadia Pro subscription as free access to the service isn’t available until an unspecified time next year. Although, it’s more or less a given that if you want to play on Stadia, you’ll be shelling out the €9.99 monthly subscription fee to play the free games on offer, avail of discounts for other titles, and stream in the highest quality possible.

There has been somewhat of a misconception of Stadia online with people believing it to be the Netflix of gaming. On the contrary, while there will be free games available to stream with your Stadia Pro subscription, most titles must be purchased from the store. The selling point of Stadia is the ability to stream games instantly to any compatible screen without the need of a large download that could take hours on other consoles, not the accessibility to a huge game library for a minimal fee.

Stadia games can be played from PC as well, using either the controller or keyboard and mouse configuration. Currently, you’ll still need either the Founders Edition or the Premiere Pack to play using a keyboard, but once Stadia Base launches in 2020, you will be able to play from your keyboard without purchasing the Stadia controller. Again, you’ll need to pay for all games and won’t have access to the free game library or discounts on titles.

Google recommends that for streaming in 720p definition, your internet speed should be capable of downloading at a minimum 10mb/s, and for 1080p you should have a connection around 20mb/s. Based on Ireland’s average broadband speed of around 16mb/s, this should be accessible for most users. If you live in rural areas where connections aren’t as quick, then you may have to re-evaluate your purchase intent.

For 4k streaming, the recommended connection strength is 30mb/s, but it’s essential – if not obvious - to note that you need a 4k compatible device to stream in this resolution. If you’re unsure of your connection speed, Google has included a nifty speed checker on the Stadia website to check compatibility before you buy.

For the family audience out there, who may be thinking of getting Stadia as a Christmas present for a younger gamer, Google have a suite of parental control options. If your young player is supposed to be doing their homework and try to boot a game on the service, Google will send a notification to the account holder and give them the option to restrict access to the stream.

While Stadia might not have all the bells and whistles it hopes to have at launch, it has all the promise to deliver a gaming experience that shouldn’t go ignored by gamers, and a lot of potential for developers to be creative.