Although we might think of the big hits - 'A Link To The Past', 'Breath of the Wild', 'Majora's Mask' - there have been 27 games made in the franchise's history.

For this piece, we're solely focused on the best of the very best.

Although it's considered as the "black sheep" of the family, 'The Adventures of Link' spoke to the franchise's incredible ability to try new things without fear of failure. The previous game, the first in the series, was built with a top-down perspective. You'd imagine they'd follow it in the second one, right? Wrong. The side-scrolling perspective may not have been a hit with fans, but as a noble failure, 'The Adventures of Link' is worth including in its history and among its best by virtue of its willingness to try something new.

Again, what marks out so much of 'The Legend Zelda' is its full embrace of new technology. 'The Legend of Zelda' was the very game to use a battery-powered saving system. For 'Skyward Sword', it made extensive use of the Wii MotionPlus system. The WiiMote became your sword, and saw you slashing and striking your way across Hyrule with specific overworlds and a gorgeous orchestral score to boot.

What's fascinating about 'A Link Between Worlds' is that it's one of the few games - maybe the only game, in fact - that seamlessly blend together 2D side-scrolling and 3D top-down in a single game and not only makes it work, but makes it a central mechanic of the game. On top of that, it embrace its lineage with 'A Link To The Past' in a way that the franchise hadn't necessarily done before while still being boldly experimental.

Again, experimentation is the very essence of 'The Legend of Zelda' and in 'The Wind Waker', the designers adopted a completely new art style for the game, deliberately eschewing realism for animated, cel-shaded designs and graphics. It was a gamble, sadly, that didn't pay off. Although the game received glowing reviews at the time and is regarded fondly by players, it sold so poorly that it made Nintendo go in the opposite direction for its next game - 'Twilight Princess'.

As an example of utilising the limitations of its console, 'The Legend of Zelda' is a bible for programmers. So much is packed into a tiny amount of data, and the influence of it is still felt to this day. It was the very first console game to utilise saved games through a battery in the golden cartridge. It laid the groundwork for non-linear gameplay that nearly all RPGs take for as granted. It is no less than the very genesis of console RPGs as we know them today. 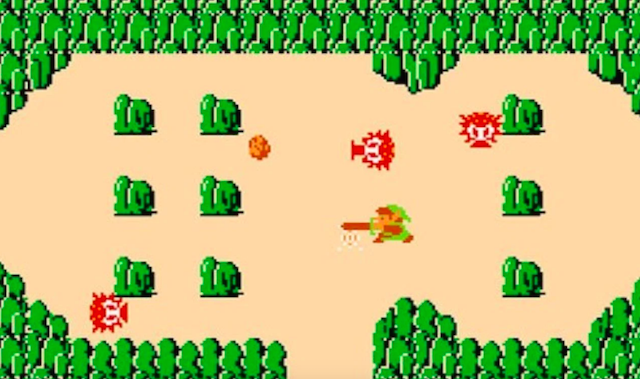 This screenshot of 'Legend of Zelda' is approximately 2.5 times the size of the original game's code.

A direct response to the colourful, child-friendly in 'The Wind Waker', 'Twilight Princess' was the first game in the entire franchise to come with a Teen rating and it's not hard to see why. It was darker, more violent, and thrilling than anything in the series until that point and embraced the action-led sequences of the game in a way that hadn't been done since 'The Ocarina of Time'. The enemies were smarter, the quests were longer, and the fairytale setting grew long with shadows and darkness in a way it hadn't done before.

Although it bears close DNA with 'Ocarina of Time', 'Majora's Mask' feels in a lot of ways like the difficult second album of 'The Legend of Zelda' franchise. It was experimental, sure, but it hewed to what it knew. You could see it mature and develop, yes, and the three-day cycle was a brilliant piece of gameplay mechanics. It's also dreamlike in its setting, and the sense of unease - not threat, unease - throughout the game makes it disturbing. You look up, and staring down at you, is a giant face with bared teeth and wild eyes - waiting to fall.

If 'The Legend of Zelda' was the Old Testament of RPGs, 'A Link To The Past' was undoubtedly the New Testament. The germs of ideas that took root in the NES came into blossom in the SNES, and the top-down perspective worked wonders for the game, and the easy-to-grasp combat system gave it an edge of excitement. The plot, as well, felt much more fully realised than previous RPGs at that point, and even now, it still is a compelling piece of storytelling with a cracking first act.

It may have taken a long time, and other RPGs came up behind it and stole a march, but 'Breath of the Wild' is only the first in the franchise to become truly open-world. And what a world it is. Whereas in the likes of other games where imagination filled in the blanks of a wide, open world, here in 'Breath of the Wild', it was fully realised. If you saw a tall mountain, you can walk to it and climb it. If you see a forest filled with trees, you can leap off your horse and explore it. The freedom that players are given in 'Breath of the Wild' is nothing short of extraordinary.

The shrine quests, for example, can be solved in any way you deem fit. Some of them might be obvious, while others can be solved with extraordinary feats of ingenuity and sharpshooting. There is no end to the possibilities, only your imagination. It's not that the graphics are gorgeously realised - they are - or the music is done with a grace and beauty like never been before. There is a quality to 'Breath of the Wild' that it speaks not only to new generations, but those who came up with it and now see it realised in a way it could have only been imagined.

Why does 'Ocarina of Time' make the top of our list, when the graphics are now dated and the limitations of the game are more apparent? Because greatness isn't about the best graphics, or the highest frame-rate, or the longest game. Greatness is in how long it stays with you. Everyone remembers the first time they played 'Ocarina of Time'.

It might have been a birthday, a Christmas morning, at a friend's house, but you never forget the first time you stepped out on to Hyrule Field, or mounted Epona and jumped the walls of Lon-Lon Ranch to freedom. Those are pivotal moments, ones that stay with you long after you've defeated Ganondorf. The sense of scale and wonder might not return when you come back to the game, but the memory is there and that's enough.

Why is it so difficult to get a PlayStation 5?

Ranking the 'Mortal Kombat' games from worst to best

Here are the four games for this month's PlayStation Plus