Review: 'The Girl on the Train' at the Bord Gáis Energy Theatre

This gripping performance will keep you on the edge of your seat until the final scenes.

Calling all EastEnders fans, Ronnie is in town!

EastEnders star Samantha Womack and Coronation Street star Oliver Farnworth star in the theatre adaptation of the best-selling novel and film, The Girl on the Train, at the Bord Gáis Energy Theatre.

Adapted from Paula Hawkins' brilliant novel - an international success selling over twenty million copies worldwide – this gripping performance will keep you on the edge of your seat until the final scenes. 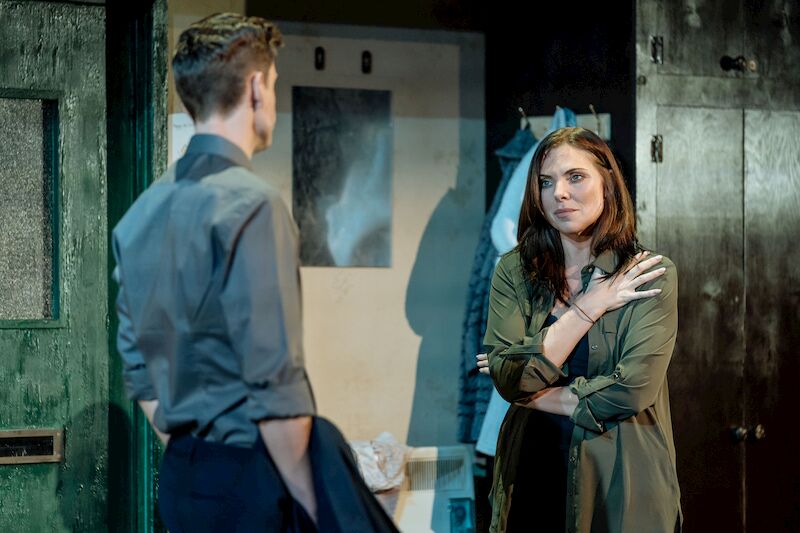 Samantha Womack is best known for brilliantly playing Ronnie Mitchell in BBC1's EastEnders. In this production, she takes the lead role of the lonely and damaged Rachel Watson. Rachel longs for a different life. Crippled by her past and her alcohol dependency, her only escape is the perfect couple she watches through the train window every day. Happy and in love, or so it seems, Rachel fantasises about their idyllic life together.

When Rachel learns that the woman she has been secretly watching has gone missing, she quickly finds herself as a witness and even a suspect in a gripping mystery that twists and turns with great style.

The story is strong and engaging throughout. I was particularly excited to see this play, having been a big fan of both the novel and the film. The stage version remains true to the original book, most obviously being set in London, rather than in New York, like the film version. This will excite fans of the book who, like me, felt the story being set in New York didn’t sit well in the film version.

As Rachel, Samantha Womack holds the audience’s attention throughout. She makes a deeply flawed and damaged character feel very sympathetic, even when her actions appear to be very dark.

Oliver Farnworth plays a brilliant version of Scott. His portrayal of the anguished and confused character really left the audience wondering – is he a good guy? Is he a bad guy? Until the final scenes, when all the secrets were revealed, it was up for debate.

My only minor criticism is that there were sprinklings of humour throughout the play that felt unnatural to me. As a fan of the book and the film, I know that this humour wasn’t a part of the original story. However, it served a purpose and got a few chuckles from the audience, breaking up the tension. But for me, it took away from the overall story.

The Girl On The Train is a thrilling ride. Fans of the book, film or both, as well as those experiencing the story for the very first time, will most likely enjoy this stage version. It’s running in the Bord Gáis Energy Theatre until 8th June 2019, so you better be quick if you fancy seeing it! For tickets, click here.