Gertrude: Fried Chicken for Breakfast is Always a Good Idea

All The Food's Lisa Cope gives Gertude the once over

When rumours started circling last year that 3fe's Colin Harmon was bringing a new all day dining restaurant to Pearse Street, it instantly became one of the most hotly anticipated openings of the year. A series of delays had us thinking it was never going to open (it was a tie between Gertrude and Uno Mas for who had us chewing our fingernails more), but finally it did in early December and seemed to be an instant hit. They've since backed away from the all-day dining concept, with separate breakfast, lunch and dinner options from this week, but that hasn't resulted in too many changes to the menu. 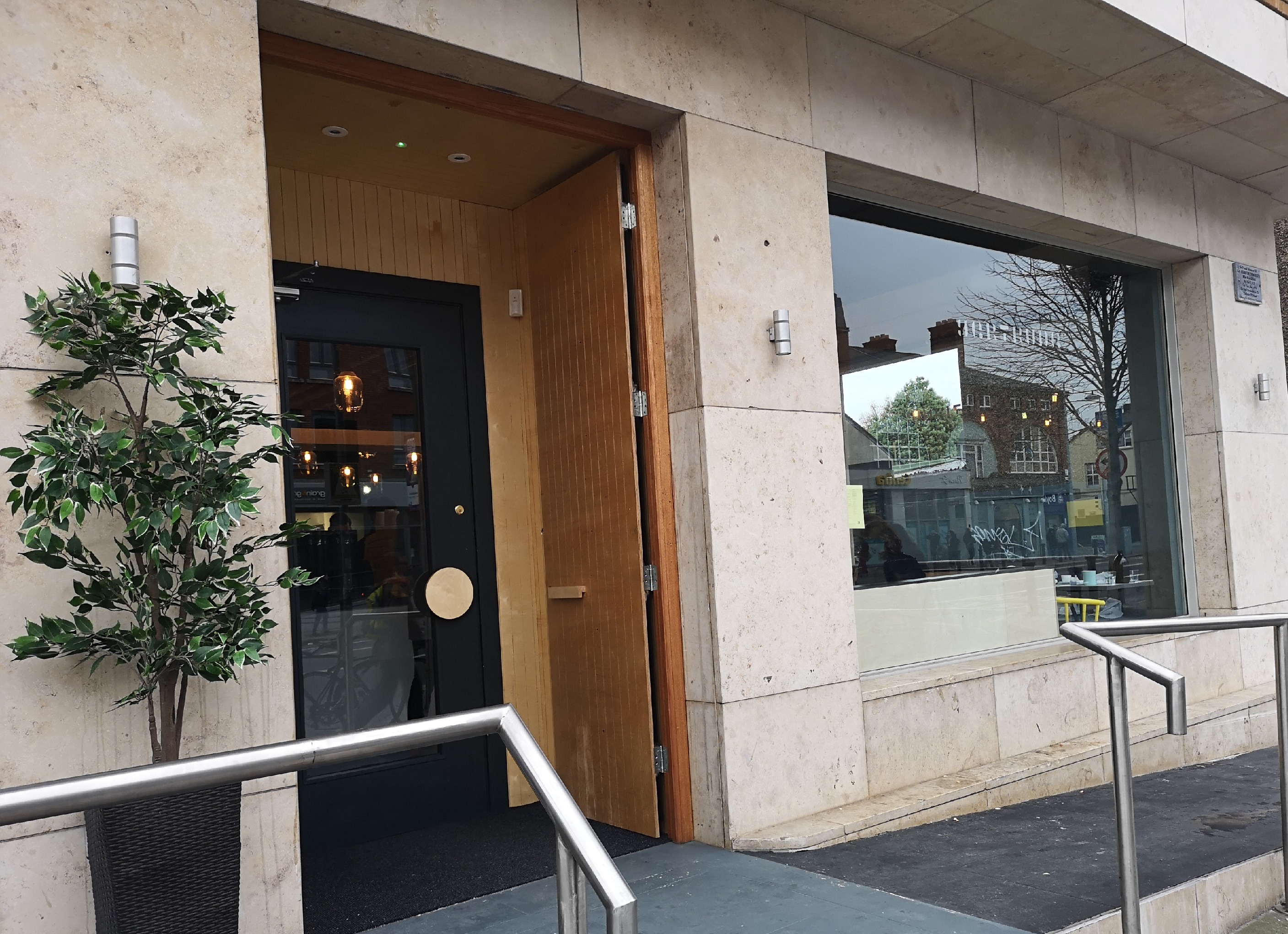 It's located about half way between Trinity and Grand Canal Dock, and the kitchen is headed up by Holly Dalton, formerly head chef at 3fe's café on Grand Canal Street. She had a very good reputation at 3fe so we were eager to see what she'd do at Gertrude with a dinner service and more scope for experimentation with the menu. The wine list was put together by Peter Conway, a well known face on the wine scene who was formerly involved with Green Man Wines in Terenure, so we knew it was in good hands - we'd even heard rumours of sherry. 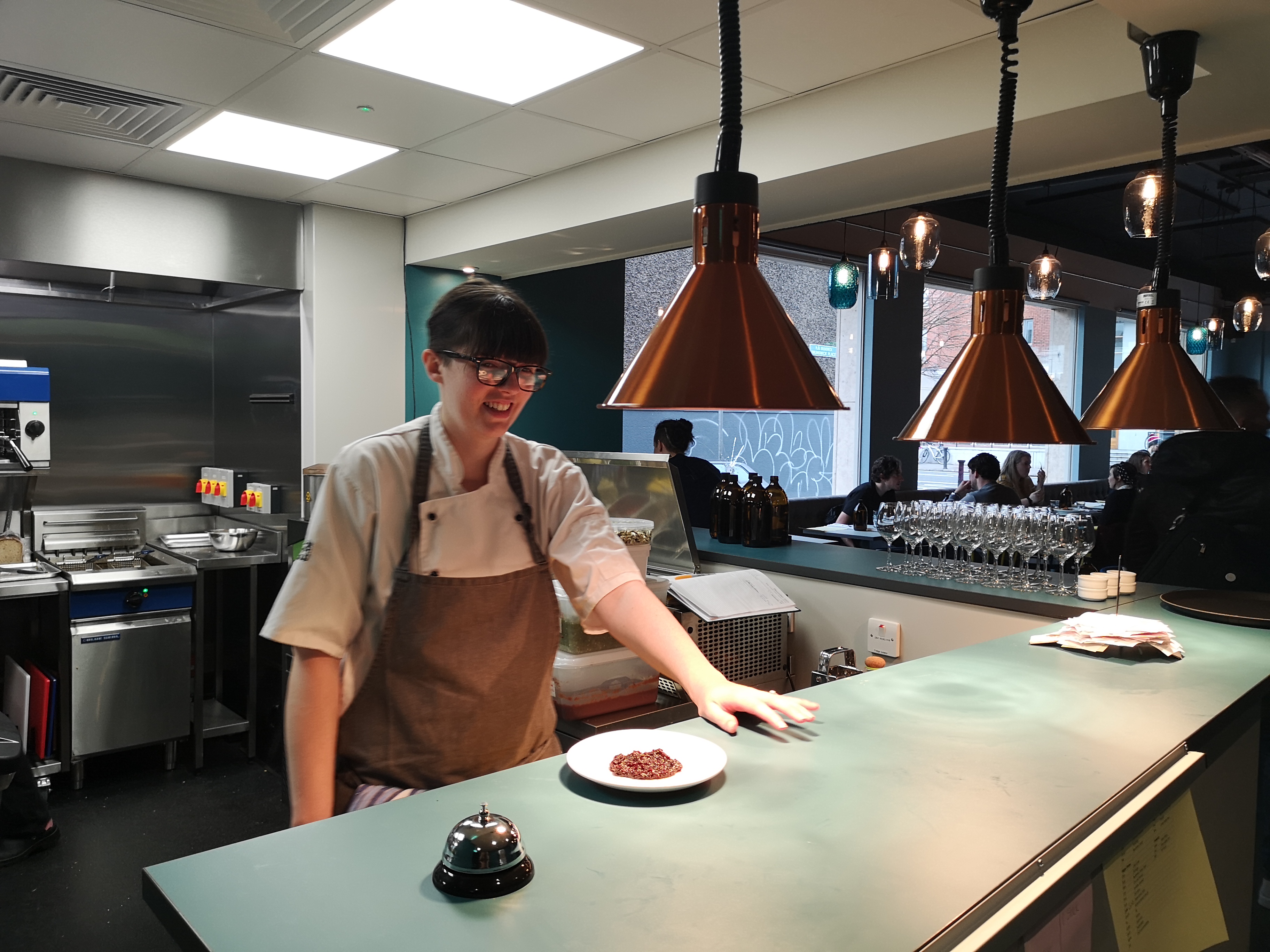 There are plenty of good boozers in the direction of Trinity, like The Ginger Man on Fenian Street and The Lincoln's Inn on Lincoln place but if it's wine you want just come straight here. If you're out for the night and want somewhere with cocktails and/or a view you could head to Charlotte Quay or the rooftop bar in The Marker Hotel. 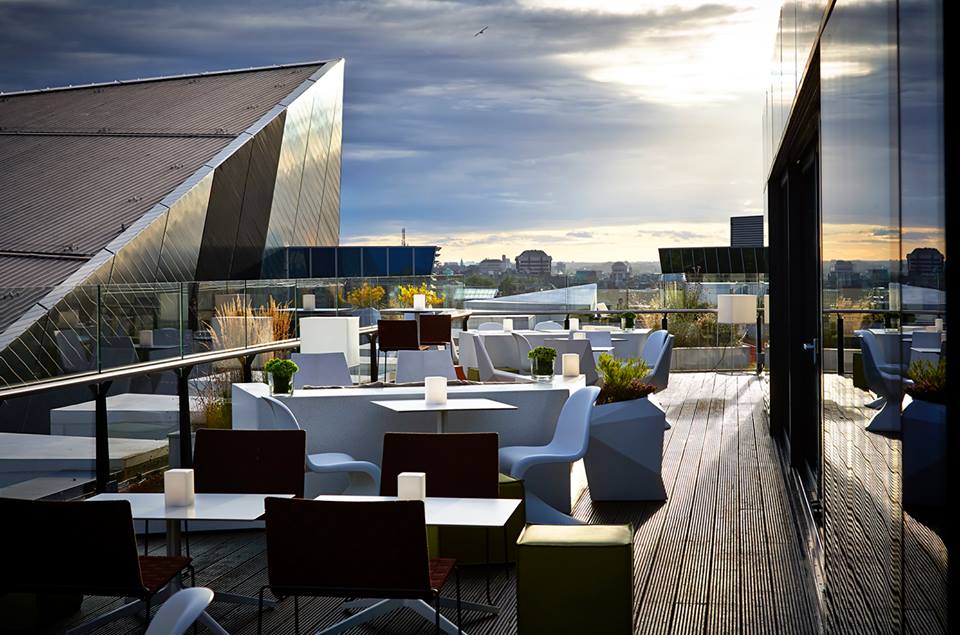 The table in the window at the front is the one to bag (especially if you like taking photos of your food - guilty), as it's prime people watching real estate and you can see the whole restaurant, but any of the tables against the window are nice to sit at. There are also tables in the centre of the restaurant which we imagine would be good for a group or if you have a buggy/general child paraphernalia, and there are are some high tables on the other side if being elevated is your thing. 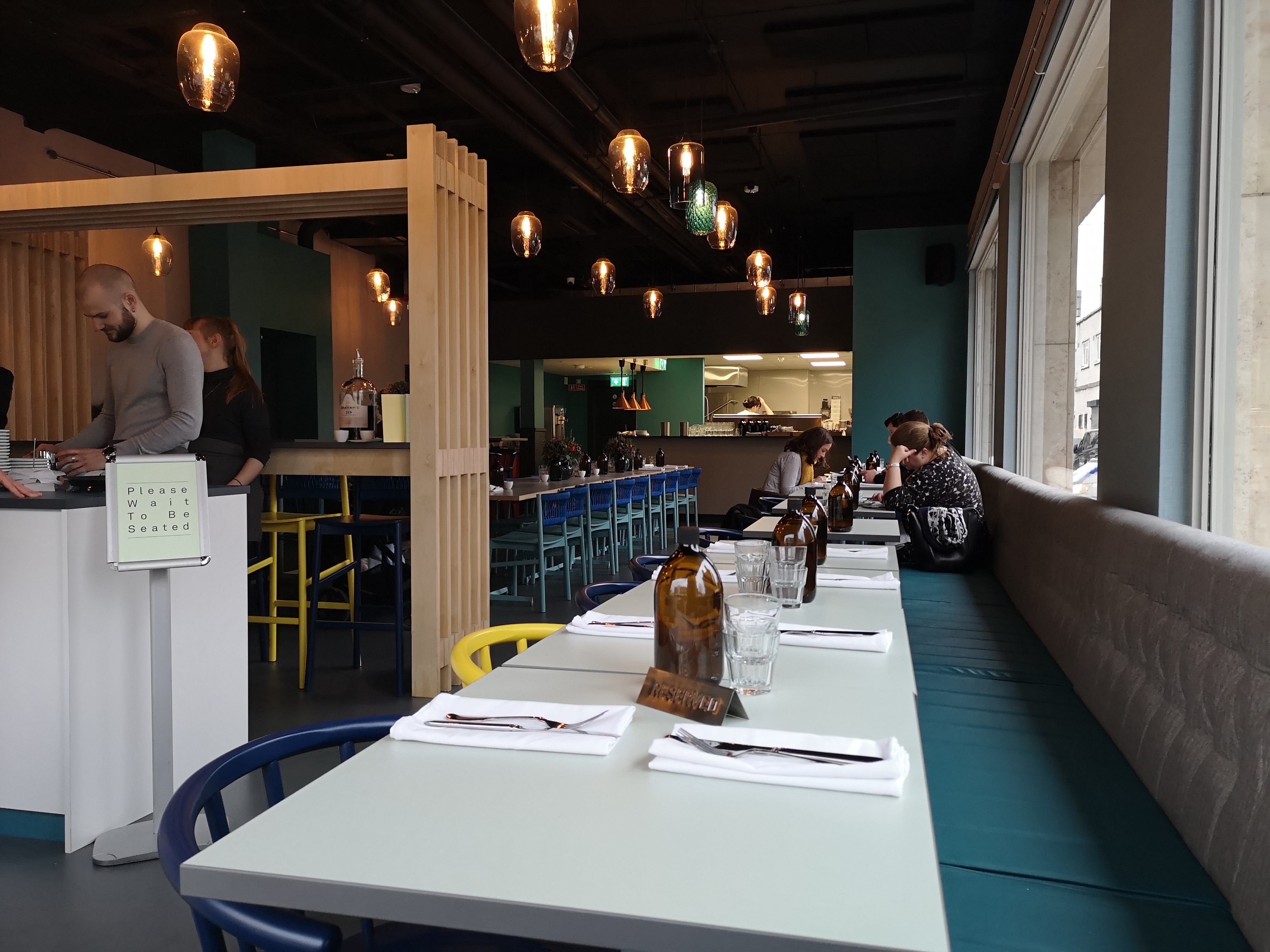 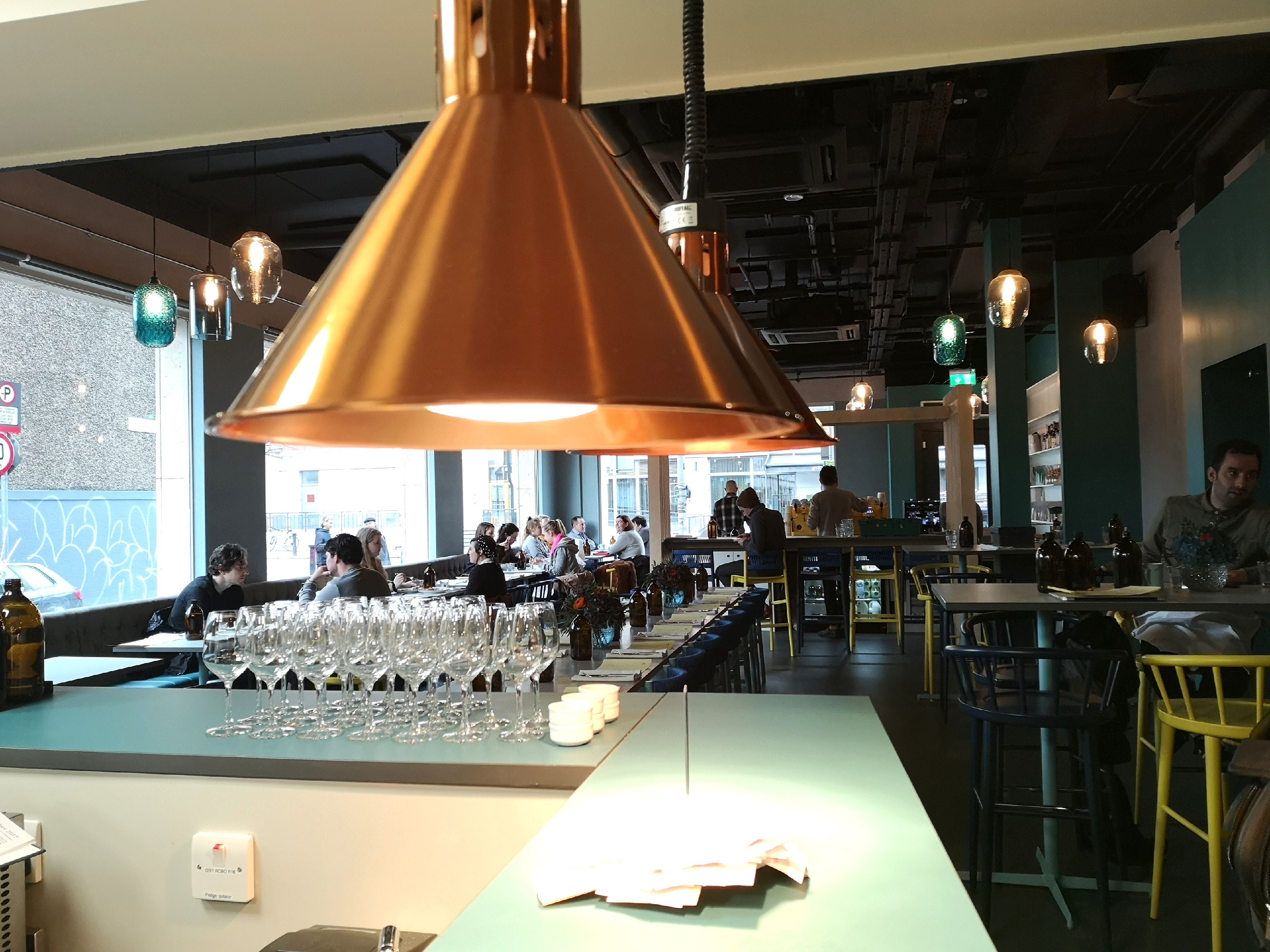 We tried all three snacks on the current menu and our favourites were the Cooleeny croquettes with beetroot ketchup (hot cheese - what's not to like?) and the bacon and cabbage dumplings which we thought were genius and packed so much flavour. They were both generous portions for €6 too. 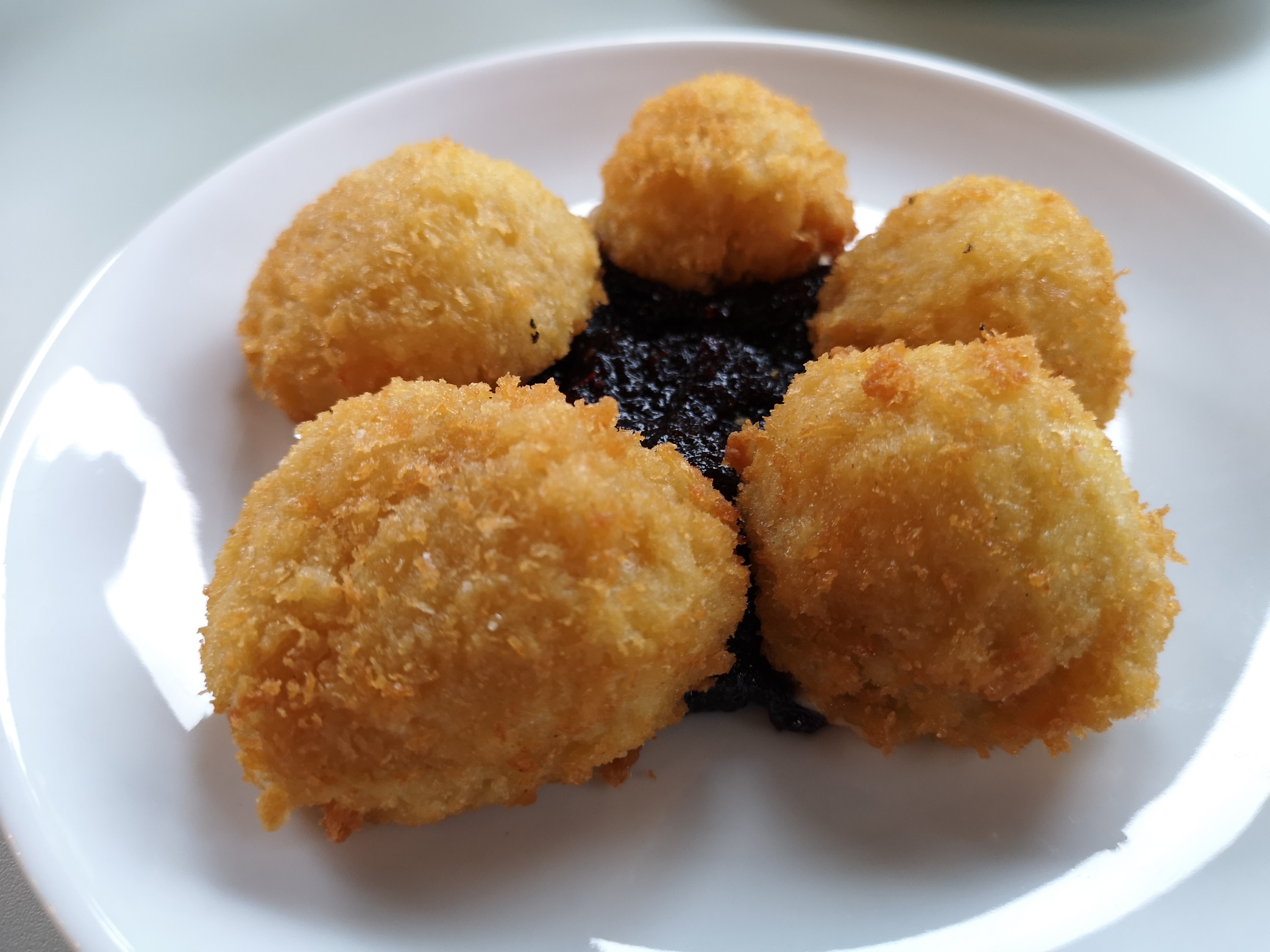 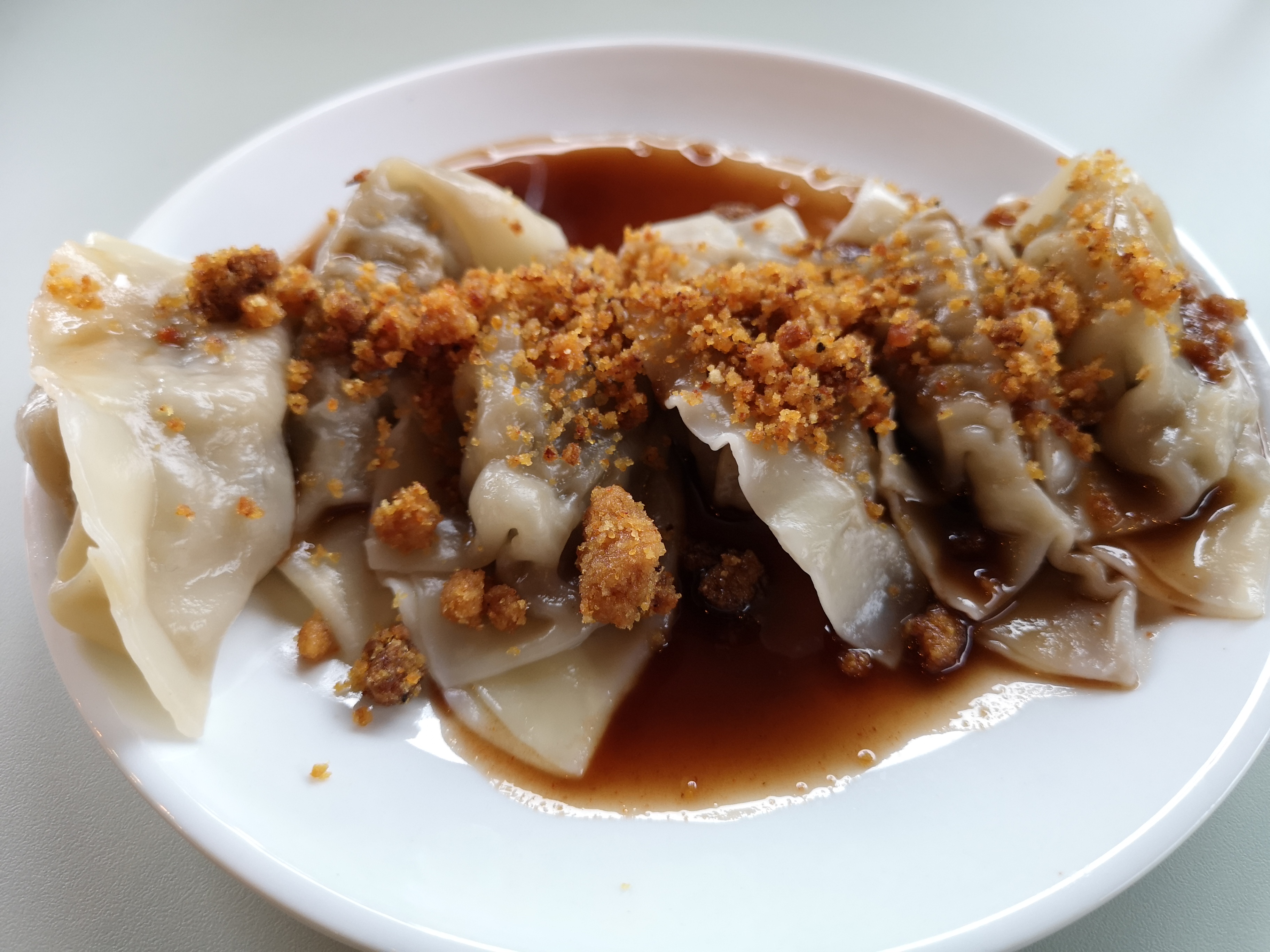 Whole Hoggs salami spread with sauerkraut on Bread Nation toast was also good, but we thought it was a bit unbalanced in the direction of spice, to the point where our tastebuds took a bit of time to recover, and it generally wasn't as memorable as the other two. 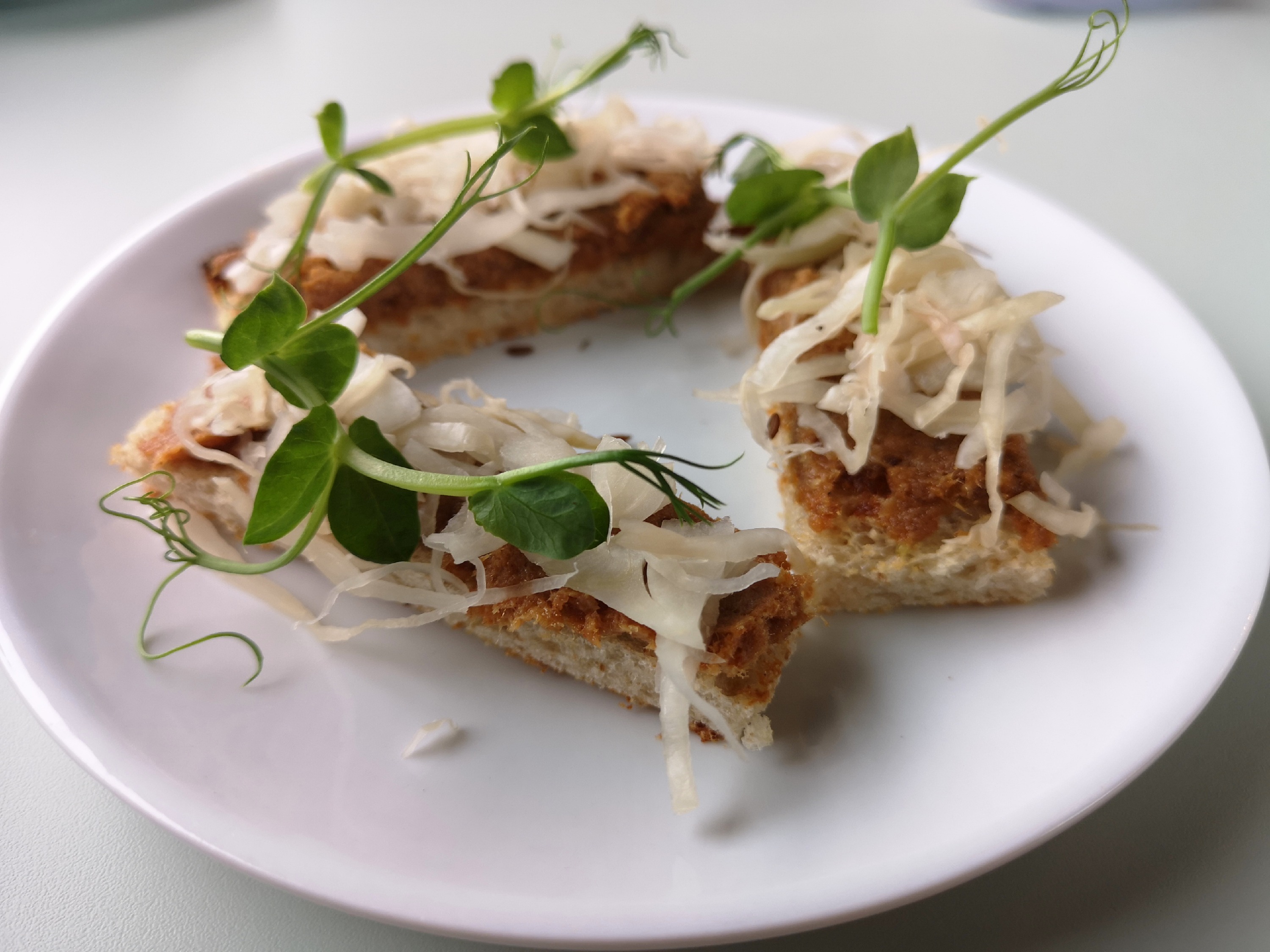 We'd heard loads about the pork tonkatsu sandwich with kewpie mayo and shredded white cabbage on Bread Nation batch bread, so were pleased to find it delivered and is something we will definitely be going back for. It was also huge, so go hungry. 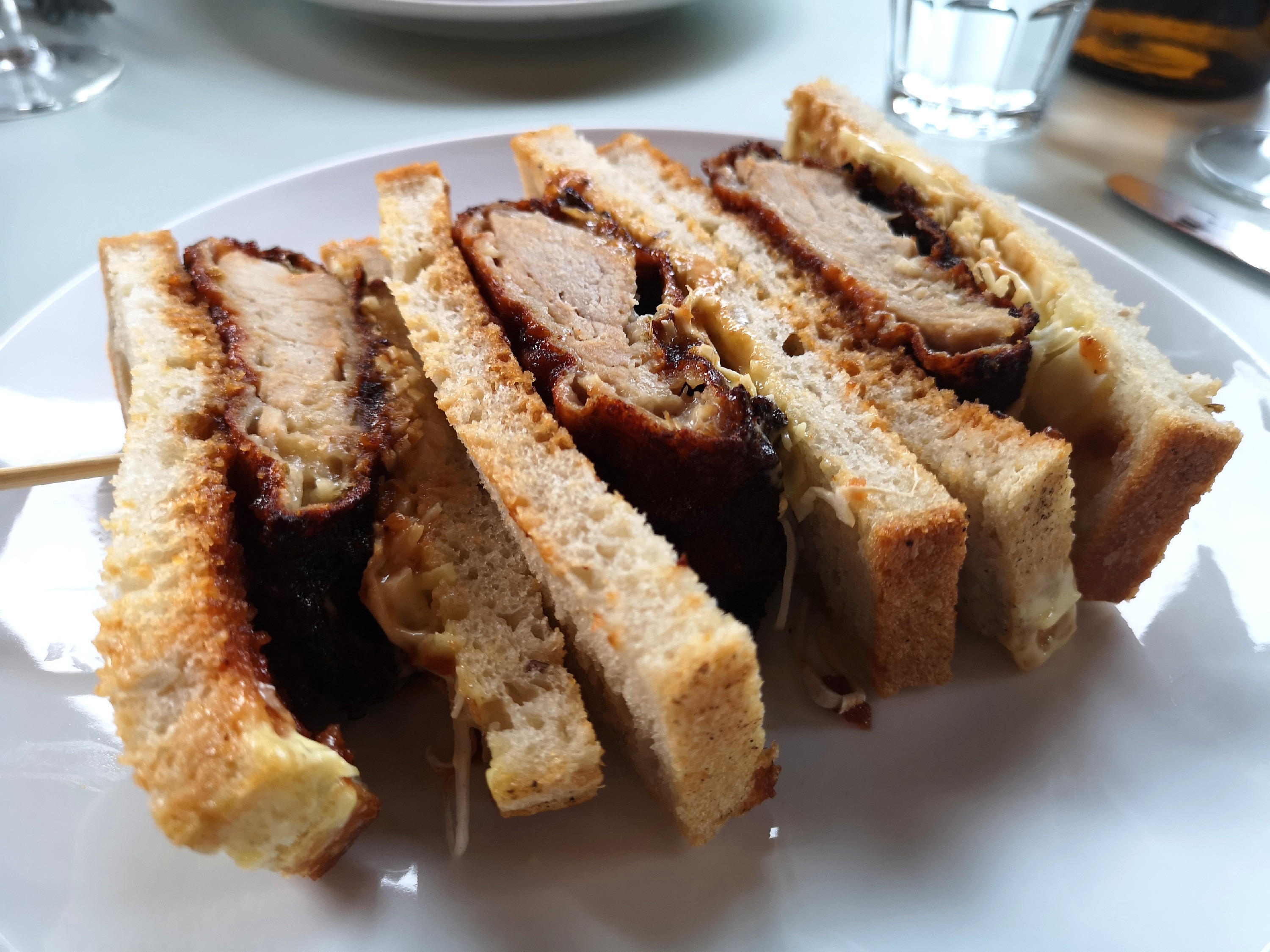 Our other favourite was the buttermilk chicken and pancakes with honey butter, fermented hot sauce and orchard syrup, which is one of the best things we've eaten in 2019 (dinner at Variety Jones last weekend is also up there). The chicken and pancakes were both perfect and we'd quite like to bribe Holly for that punchy hot sauce recipe. Also, honey butter. Just when we thought it couldn't get any better. 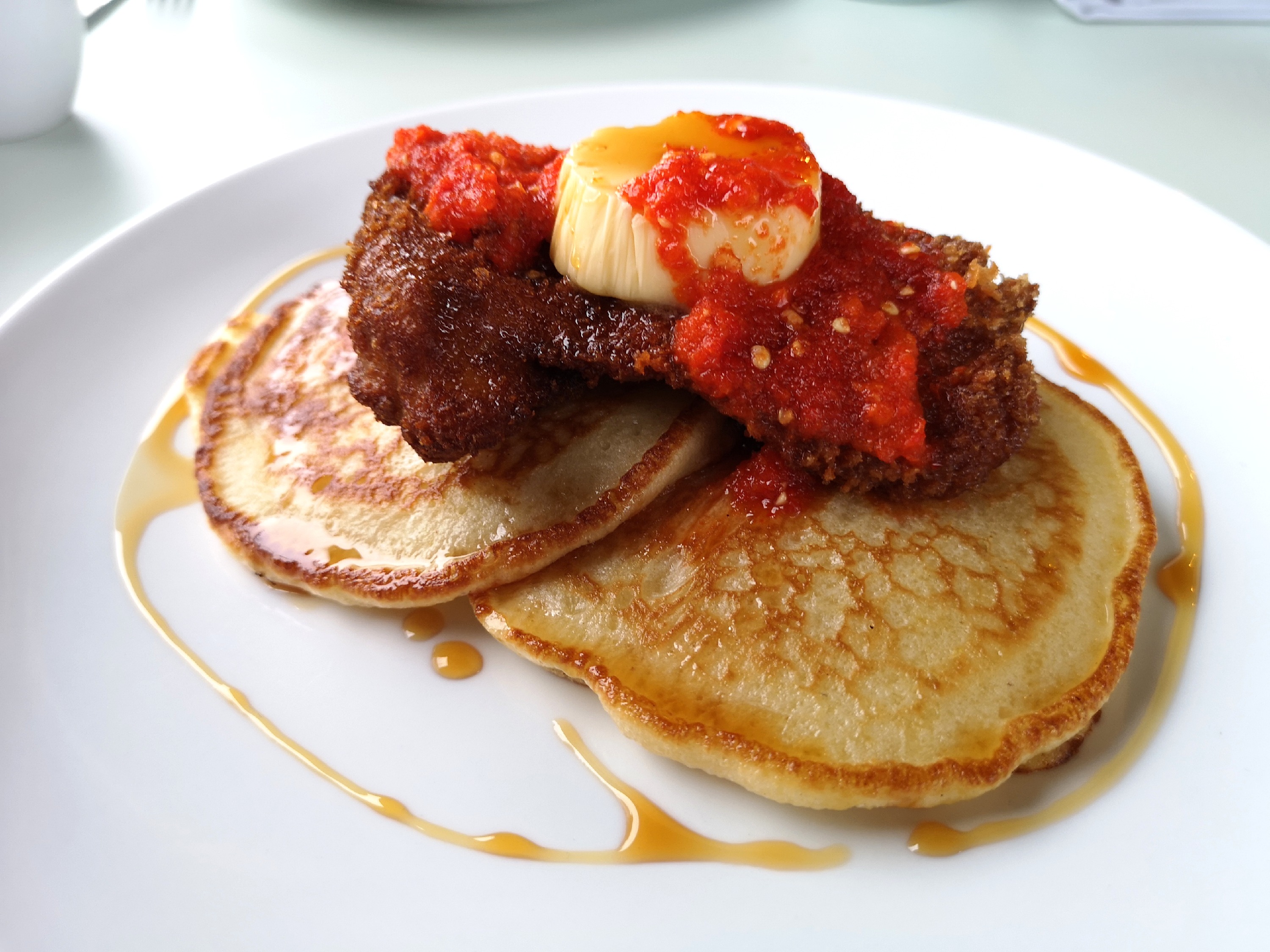 We also tried the duck buns which had good bao and meat but which we thought were a bit too salty, and the game pie which was one of those uber comforting dishes perfect for a cold day, but felt it could have done with some kind of green salad to balance the heft, which wasn't an option as a side.

For dessert we loved the apple fritters and custard (which tasted more like a crème anglaise - not a complaint), and while the fritters were denser than we were expecting they had a good amount of apple and a gorgeous cinnamon sugar coating which reminded us of times gone by, when doughnuts were simple things costing 40c from a stand on O'Connell Street. 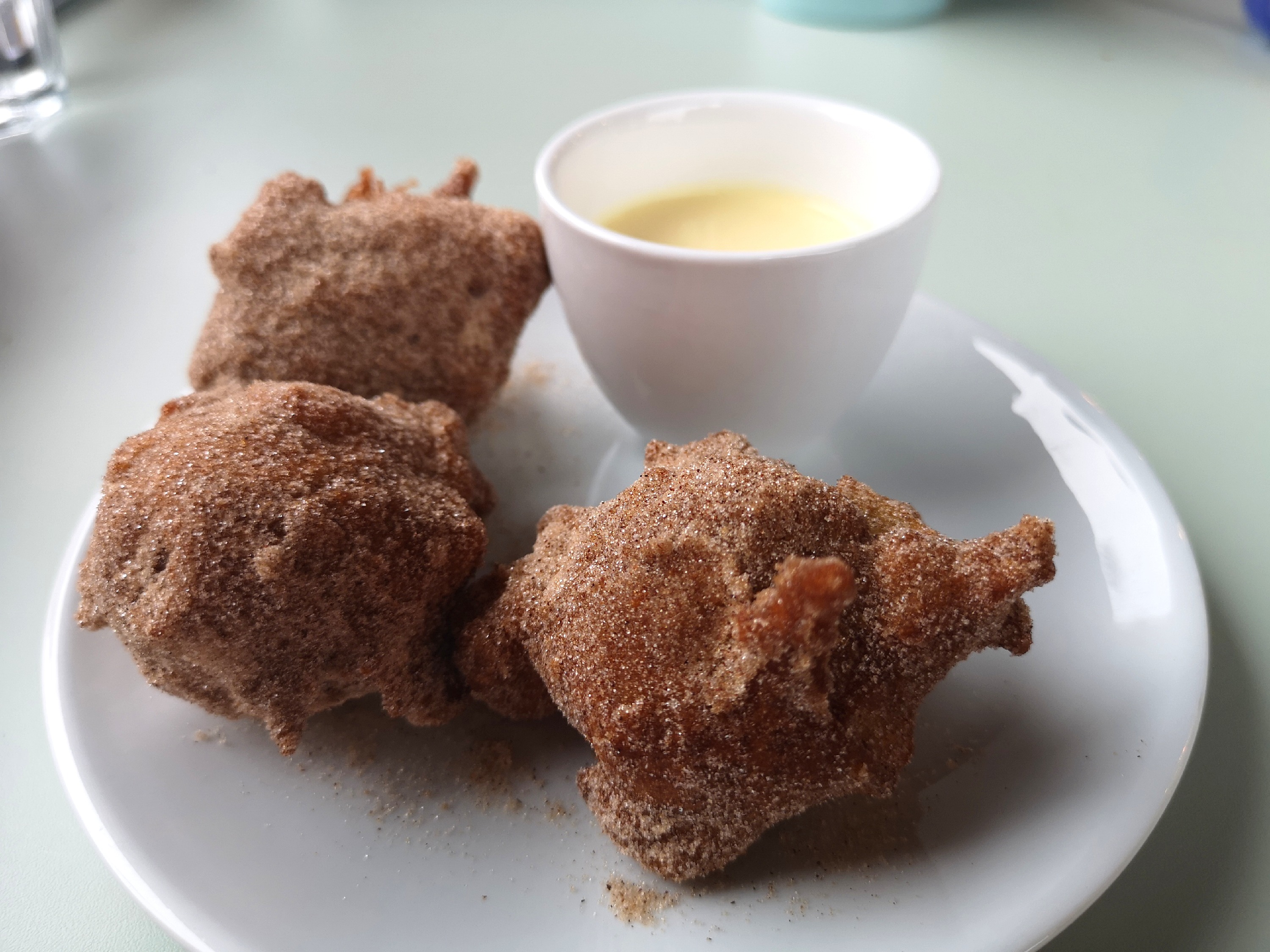 It's also worth noting that there are extensive options for kids, with a dedicated menu featuring five choices, or you can get a kids size portion of anything on the main menu for half price - more of this please. They also have highchairs and a baby change, so a very child friendly place to bring the nippers when you don't want to compromise on food quality.

Coffee is obviously excellent, and since we visited they've introduced free top ups on filter coffee and tea. It's obvious that the wine list has been lovingly put together, with loads of minimal intervention options, vermouth and sherries, and there was a lot we wanted to drink. If you're day time drinking try the red Puszta Libre from Claus Preissinger which is only 11.5% and as juicy as a punnet of cherries. 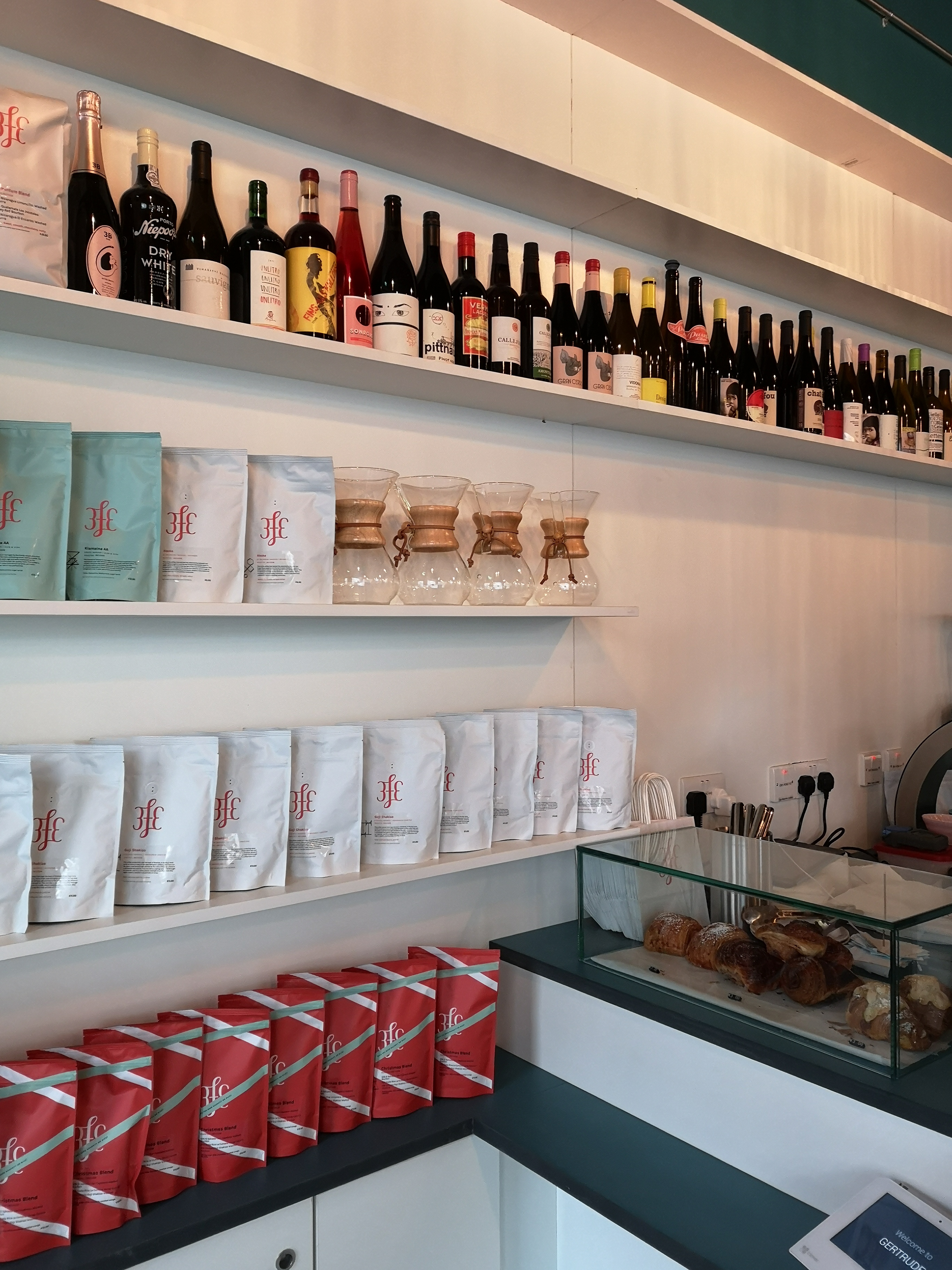 The staff were all really wam and full of smiles, but on both occasions the food took a long time to come out, with 45 minute gaps between snacks and mains. We imagine these are teething issues in a new kitchen and that they are aware of it, but if you're nipping in at lunch and are pressed for time it might be worth letting them know. 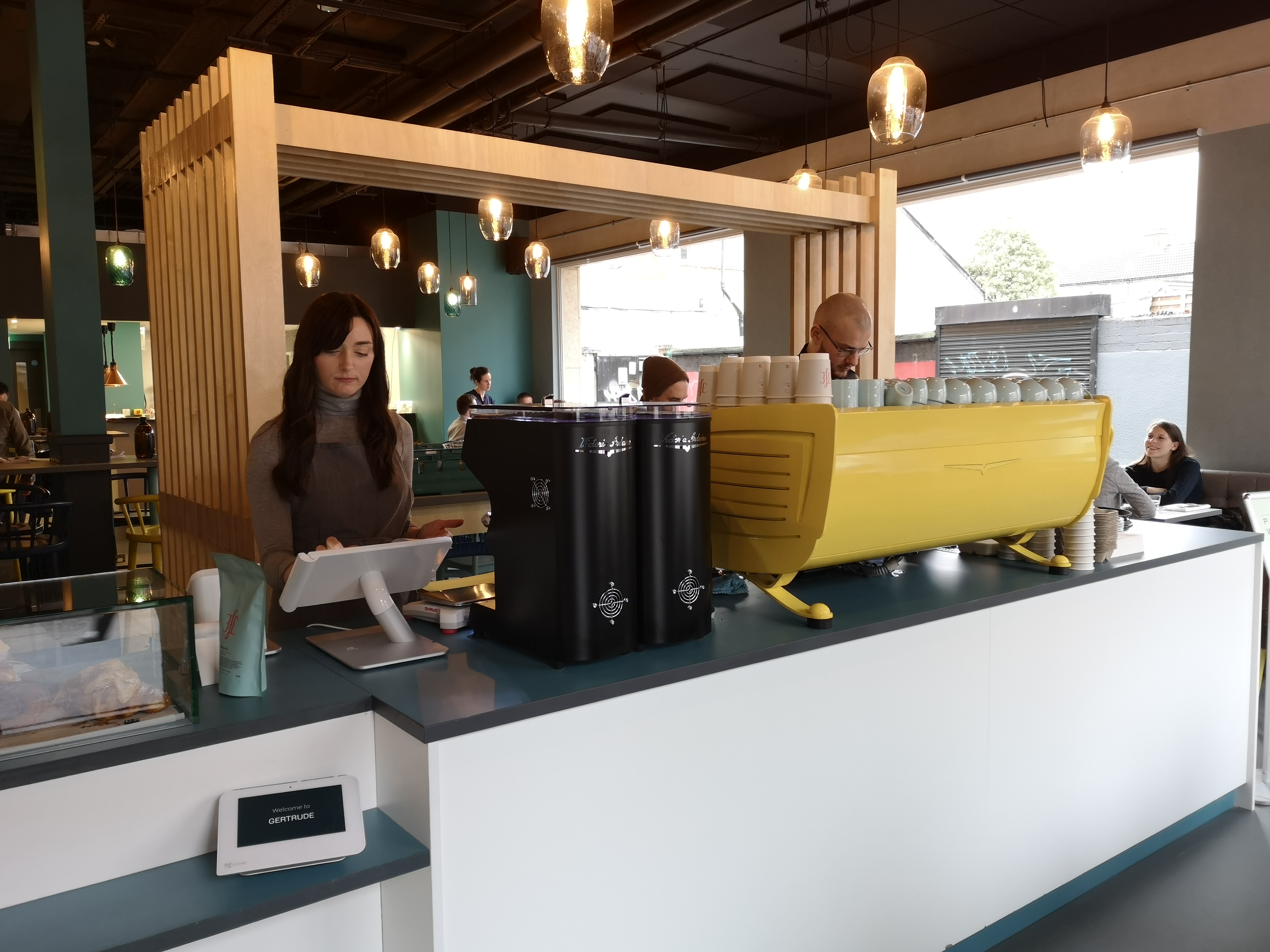 Gertrude really kept us waiting, but she's finally here and we think this is a brilliant addition to the Grand Canal Dock area. They announced this week that they were dropping the all day dining concept in favour of separate breakfast, lunch and dinner menus, and while we will admit to being gutted when we heard this, as we felt it was something really missing from the Dublin dining scene, in reality not a lot has changed, and they say that people weren't ordering spatchcock chicken for breakfast and a full Irish for dinner anyway. The most important thing is that the buttermilk chicken and pancakes are still available for breakfast and lunch (and hopefully dinner - TBC).

Socially distanced 'Meadows Festival' is happening in Dublin this August

All Together Now postpones festival until 2022