Revolutionary leader James Connolly is undoubtedly an iconic face of Irish history. That tache alone would be enough to have Tom Selleck pining.

A socialist, a visionary, he fought for his beliefs and ultimately died for them, but just who was the man behind the moustache?

Well, you can find out for yourself in a new show as part of Smock Alley's upcoming Scene + Heard festival. Although if you're expecting a straight-up history lesson, think again.

'An Evening with James Connolly' hails from Sketchy People and is set to be a comedy extravaganza that packs a punch this February 12th and 13th in Smock Alley Theatre.

Created by and starring James Anderson, who like Connolly, hails from Scotland but calls Dublin home now. The show is set to feature a range of familiar historical figures who will join James Connolly for an evening of fun. Completing the cast are Seamus Stackpoole, Gráinne McIvor, and Jason Flynn.

Speaking about the new show, Anderson said, "When Connolly was put into the ground there was a rush to see who could claim his legacy. Since then, we have seen him turned into an austere and distant figure far removed from us. This has been done to ensure that we don't start getting good ideas into our heads because as Jean-Paul Marat said: "A revolution is as much fun as a man can have while keeping his trousers on".*

"It is important to remember that any of us can be a revolutionary, we just need the will and the confidence. This was the message that the Easter Rising taught us and is all but forgotten. Of course, we also want the audience to enjoy themselves so it is also riotously funny. Last week at rehearsals I laughed so hard I ended up getting heartburn, so if the audience enjoys it half as much as we do it will be something really special. Hopefully, I'll see you there and maybe bring some Gaviscon."

*Jean-Paul Marat may not have said this. 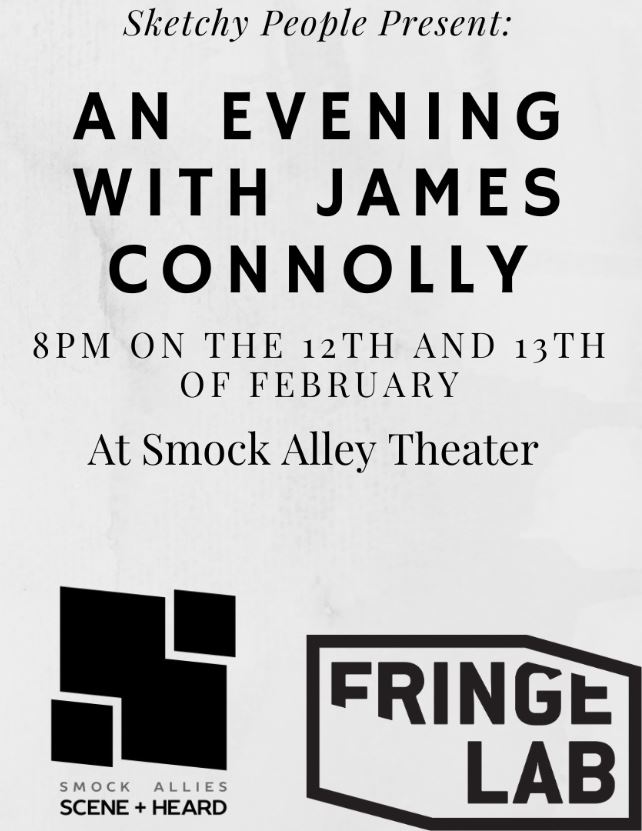 Cliona Dukes and Caoimhe Connolly, the duo behind Scene + Heard, said of the show: "We're excited to see James Anderson's take from a Scottish perspective on a well-loved historical figure - we're counting on it being a rip-roaring evening enjoyed by both history & comedy lovers."

Scene + Heard Festival returns for its fifth year this February and aims to showcase some of the best new and emerging talent the country has to offer. Audiences are an integral part of the festival, giving their feedback and constructive criticism through secret ballot, video booth testimonials, Q&A's, Twitter, Facebook and Instagram. All this feedback is collated and sent directly to the artists who use it to further develop their work.

The festival will run between the 12th – 29th February 2020 with a range of offerings from comedy and drama to music and spoken word.

'An Evening with James Connolly' debuts on the opening night of the festival, February 12th at 8pm, while you can catch a second performance at the same time the following night. (Get tickets here.)

Tickets for all shows are priced at a very reasonable €10 until 4pm on performance day, after which the price on the door (provided the show isn't sold out) is €13.

For the full programme of events for Scene + Heard 2020, head here.