“He’s, honest to God, a really good man and he has good beliefs”

'Tiger King' has taken the world by storm since launching on Netflix.

The full title is aptly 'Tiger King: Murder, Mayhem and Madness'. Everyone is talking about its stars, particularly Joe Exotic and Carole Baskin.

One of the more surreal aspects - though to be honest, the whole thing was surreal - of the doc series was the number of husbands Joe had. He was actually married to two at the same time.

His fourth husband, Dillon Passage, recently spoke to Variety Live. He opened up about Joe, whom he is still married to, and the popularity of the series.

He talked about Joe being moved to a different facility for quarantine purposes and laughing with him about the memes going around about him.

The infamous big cat owner is currently serving a 22-year prison sentence and Dillon spoke about sticking by him through it.

“I wasn’t just going to abandon him when he needed help because he was there for me,” he said. “I felt it was only right to stand by him and not judge him for the circumstance because I understood his relationship with Carole. It was a very negative kind of thing and he was in a dark place when all of this stuff occurred. He just needed support so I was just going to stand next to him.”

Dillon says last week was the last time they spoke.

“He had received hundreds and hundreds of emails, and he was spending all day on the computer just going through these emails and trying to respond to them,” he said. “He had people from all over the world saying like, ‘Team Joe’ [and] ‘Free Joe.’” 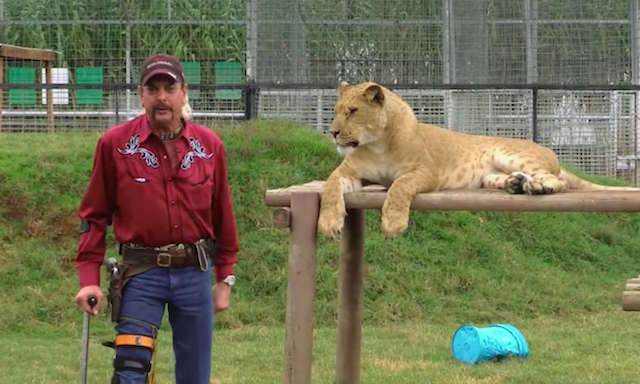 Dillon also talked about battling an addiction to prescription pills, specifically Xanax, when he met Joe. They first met at his safari bar and the zoo owner serenaded him with karaoke. After that, they visited the zoo and Dillon "never left".

“Joe helped me get healthy again, get me in the right mental state,” he said. “I felt alone. I felt like there was going to be nobody there for me. Joe made me feel like there was reason to be alive.”

He also spoke about Joe Exotic's previous relationships. “I heard from multiple people that Travis loved Joe unconditionally, never wanted to take his wedding ring off. He loved Joe for Joe. He might not have been gay but … you could build a connection with anybody,” he said.

Dillon describes the documentary as “very authentic,” but doesn't think Joe got a fair trial.

“He’s, honest to God, a really good man and he has good beliefs,” he said. “When people need help, he’s the first person that they call and he doesn’t hesitate to say yes. He’s bailed so many people out of jail, he’s gotten them vehicles. He has fed them when they had no food. I’d come home all the time and people would be raiding our fridge.”

Asked what he would do if Joe Exotic was released tomorrow, Dillon said, “I’d go pick him up and he’d come live with me where I’m at [because] this is our house and I have our dog. And I think his main goal would be to get his animals back because it was his dream and his brother’s dream to have the zoo and to do something. And he spent 15 years doing it — 15-plus years — and his whole life’s work was just taken away from him like that.”