In the Disney+ original movie 'Secret Society of Second Born Royals', we follow Sam (Peyton Elizabeth Lee), daughter of Queen Catherine (Elodie Yung) and little sister of future queen, Princess Eleanor (Ashley Liao). Sam has no interest in royalty - she just wants to rock out with her fellow "rock" band member and best friend Mike (Noah Lomax). When the two land in trouble, Sam gets sent to summer school - boo! But then it turns out the school will train her and fellow second-born royals for a secret society. She and her classmates have inherited superpowers which instructor James (Skylar Astin) helps hone so they can join the society's efforts in saving the world.

One feared that following the release of 'Artemis Fowl' on Disney+, similar subpar features would follow. Sure, the live-action remake of 'Mulan' wasn't the worst. But 'Secret Society of Second Born Royals' is so blasé that one truly loses hope that the House of Mouse really cares anymore. They just spew out rubbish they know audiences will consume in masses.

You think Disney covered everything you could about being a superhero through Marvel? Well guess what kids?! Now you can be a superhero AND a prince/princess AND a secret agent! What fun! Loaded with the most cringeworthy, banal dialogue one can encounter in a feature (lines like "you're meant for something great" and "we've something he doesn't have... We're a team!" being just a couple of examples), one shudders from the opening narration.

The film depends entirely on the most trite and overused movie conventions. You've got our "rebel" protagonist who "just doesn't fit in." Her sister who's "perfect", but wait, it turns out she's human and flawed too. The bad guy in a top security prison ("all this for one guy?" a guard asks unironically) who breaks out of jail moments after we first meet him. Not to mention the second-born royals based entirely around stereotypes such as the weird girl, the loner, and the popular blonde. 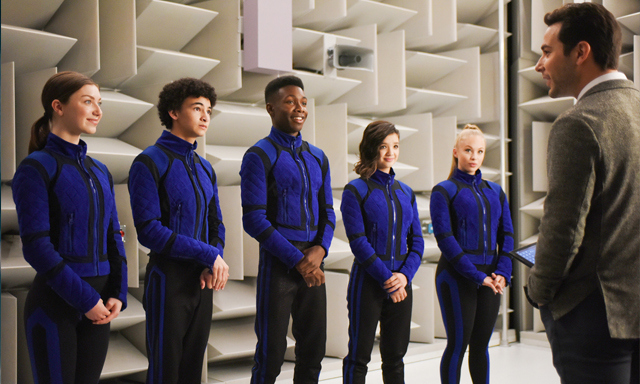 Let's not forget to throw in a "hanging out with our new friends at the beach while music blasts in the background" montage. And a finale where the heroes are in pretty dresses and tuxes while also kicking butt (it's Disney, so you can't say ass).

There are so many plot holes you could make a colander out of the movie. Like why does Sam turn on the sprinklers rather than just leaving in the night club scene when she's feeling overwhelmed? And why do there seem to be so few actual members of the society? Also why does Sam chase the bad guy after barely getting away with her life? And then why the hell does her mom just let her see him afterwards? Also for a society that's meant to be secret, they seem to have told everyone about it by the end...

In addition, the CGI is bad enough to rival The Rock as The Scorpion King in 'The Mummy Returns'. Top this off with lame, over-the-top, Disney Channel-esque acting and zero chemistry, particularly between characters who are meant to be family members, and you just have a really rubbish movie. Disney+ subscribers might check 'Secret Society of Second Born Royals' out for the sake of curiosity - after all, they paid for the subscription - but don't bother.