Review: So 'Amy Schumer Growing' is just kind of bleh

'Amy Schumer Growing' - the comedian's second Netflix special after her 'Leather Special' - is now live. Yes Schumer has grown much in the interceding years. She got married, she's expecting her first child. But has her sense of humour or stand-up style grown? Not really, no.

Amy Schumer is at an interesting point in her career as well as her life. Her movie debut 'Trainwreck' was a big success back in 2015. The next year, her memoir 'The Girl with the Lower Back Tattoo' and Broadway debut 'Meteor Shower' also proved hits. In more recent years, her film career ('I Feel Pretty', 'Snatched', 'Thank You For Your Service') has proven less successful. Let's not even get into what happened with the Barbie movie... Still, in the past year she tied the knot with chef Chris Fischer and became pregnant so who cares about the other crap, really?

Indeed, the recent changes in Schumer's personal life make for the majority of her show. Mind you, her opening joke is still about f**king and partying like a mad ting. This is immediately followed by the acknowledgment that she is now pregnant then by the 'appallment' that it took people so long to notice that she's expecting. While punctuated by some interesting moments, such as the revelation that her husband is on the autistic spectrum, and that was part of the reason she fell in love with him, the show plays out in a rather predictable, formulaic way. If someone familiar with Amy's stand-up style had followed her life in the media for the last couple of years, and was asked to pen the script for the show, they'd probably hit all the same beats. 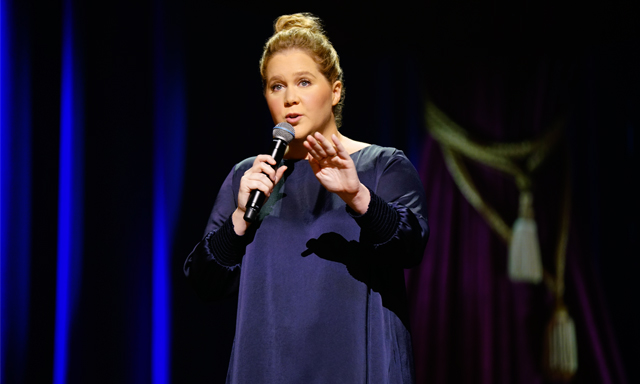 There's a Meghan Markle joke in there and she likens her marriage to Snoop marrying weed. It's all very basic and 'ok, we get it'. The humour seems obvious and while it can be refreshingly vulgar, there's a genuine lack of ha-ha funny moments. Schumer does address her frequent hospitalisation and hypermemesis, which is at least a different angle. Plus you have to admire the her persistent body positivity message, manifesting itself in her flashing her pregnant belly with plastered down belly button. But then she talks about periods for so long that you'll find yourself looking at your watch, baffled.

Now in fairness, 'Amy Schumer Growing' can be quite funny, when on the topics of sex and long term relationships, for example. However, the aforementioned period segment is too long, plus there just aren't enough laugh out loud moments. Now for a stand-up special, that's hardly ideal.