‘House of Cards’ returns to Netflix for a sixth and final season. As we know by now, lead Kevin Spacey was fired from the show last year following sexual misconduct allegations. Now, just as her character Claire Underwood said ‘My turn’ at the conclusion of season five, Robin Wright takes front and centre in the series conclusion.

Frank Underwood is deceased in this season, as has been previously confirmed, and there will be no shots of him in these final episodes. Having been at the core of the show, fans haven't had a clue how the show will work with his absent. And while the show has certainly deteriorated in quality in recent seasons, one mustn’t forget the its significance. As Netflix’s first ‘Original’ production, ‘House of Cards’ played a crucial role in helping the streaming service turn into the behemoth it is today.

With all that in mind, we come to the important questions. Is the final season any good? Does Wright pull it off on her own? And is this a worthy conclusion to the series’ legacy?

Season 6 of ‘House of Cards’ successfully abandons the overly convoluted nature of the plot that the waning seasons before it had. However multiple storylines still lure the audience in. Primarily of course, the plot follows Claire now being President of America. She is determined to forge her own path and not follows in her husband’s footsteps. Yet – and she quickly realises this herself – she can’t help but pick up his old habits.

The season belongs very much to the female talent, and as much as the show pursues the political commentary it’s renowned for, its exploration of gender and its relationship to power, authority and the workplace, is even sharper, and appropriate given the reorientation of the season. Strong female characterisation and sterling performances are apparent in Jayne Atkinson as Cathy Durant and Patricia Clarkson as Jane Davis. Newcomer Kristen Sieh as deputy press secretary Kelsey also impresses. So do the aforementioned Zimmer and Lane.

Most threatening of all the returning characters – and therefore the most intriguing – is Doug Stamper (Michael Kelly). Doug is still Frank’s right-hand man, his fiercely loyal partner-in-crime (literally). In an early episode, Doug provides background into how their relationship was founded. How far his allegiance to Frank will go, even when the man is dead and buried, is unsettling. 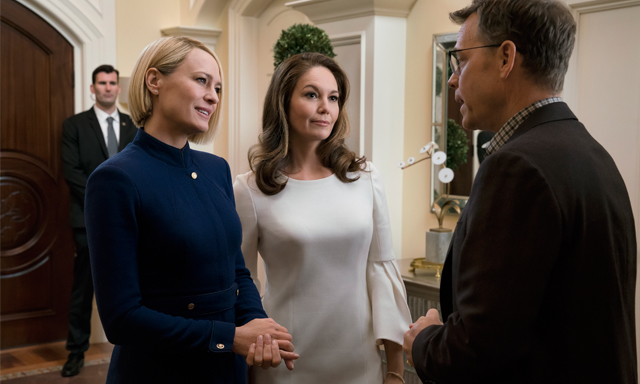 Pacing-wise, the show doesn’t dash along, which works given its multi-threaded nature. The thrilling nature of ‘House of Cards’ first two seasons is missing. Much of the pressure of whether the conclusive season works or not falls on Robin Wright (an exec producer on the show too). As Claire, she has proven herself over and over as an equal to Frank, her work behind the scenes key to their shared power. Now Wright continues to prove herself a force of nature as an actress while her character is the very definition of beguiling.

Overall, it's not quite up to the standard of the first couple of seasons. However, fans of the show who have been disappointed by recent seasons will be satisfied with the final episodes.