Everything we know about 'The Umbrella Academy' season two

Netflix's hit superhero show is on the return

Netflix's surprise hit of 2019 was certainly 'The Umbrella Academy'. And judging from various social media accounts, the show is on the return very soon.

Those of us who loved superhero series 'The Umbrella Academy' were ecstatic with the news of a second season coming our way. The first season gave us hope in Netflix providing us with deadly superhero fun in the future, now that 'Daredevil' et al had been cancelled from the service. Here are all of the confirmed facts, speculated rumours, and fan-theories about what we can expect in 'The Umbrella Academy' season two.

*Spoilers for season one below*

Where did the siblings transport themselves to?

Time-travel will again play a huge part in the second season - but as to how much, and what time period they've headed to, we're afraid is complete guesswork. Last we saw of the siblings, they were clinging onto Number Five for dear life, relying on him to transport them to a different time before the world exploded. Whether that worked out correctly, and who he took with him, is anyone's guess. 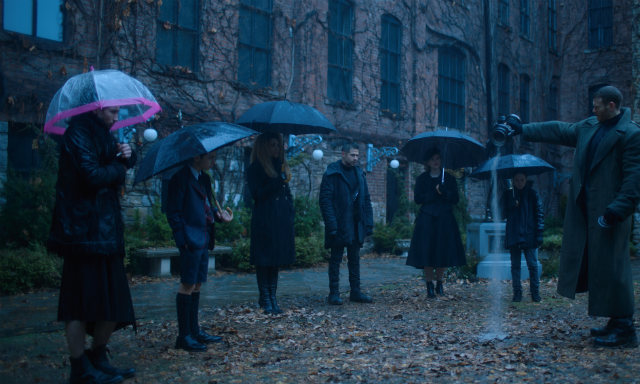 The six superhero siblings at their father's funeral

However, if we're to look at the comic books the series is based on, we might get some clues. Season one followed the first series of comic books fairly accurately, turning Vanya into the big bad towards the end. However, the ending of the comic never saw the team disappear at the end, and instead left them to deal with the aftermath of their actions. Also, a lot of the second series of comics is used throughout the first season, including Hazel and Cha-Cha appearing, and their capturing of Robert Sheehan's Klaus.

More than likely, the superhero siblings will head back to a time when they were all getting along in their mansion with their "father" Reginald Hargreeves. Their number one priority will be to stop him from caging Vanya up as a child, and suppressing her powers - but we're sure it won't be that simple.

There are some theories as to where the siblings have travelled to, which we'll get to in a bit.

So, who's coming back?

Everyone, we hope. Well, everyone that survived the end of season one at least. That means the main sibling cast, from Tom Hopper's Luther right up to Ellen Page's Vanya - and everyone in between.

From what we've spotted on social media over the past few months, the production team haven't been coy from hiding Ben/Number Six, played by Justin H. Min, from sight. In season one, the character only appears to Klaus, but it seems like wherever the cast are heading to, a much more expanded role is on the cards. Which is great news - as his superpower is one of the best.

It's a bit less certain in regards to the secondary cast members. Hazel and his love Agnes (which was a highlight from the season) managed to escape from Mary J. Blige's Cha-Cha and jumped through time to escape the apocalypse (while Cha-Cha wasn't so lucky, and might not return).

If our band of superheroes do indeed head back to a time when they were younger, it definitely means a much more expanded role for Colm Feore as Hargreeves. The snippets of information we got about the scientist in the first season weren't enough to quench our thirst for more about him. Plus, in the comics he's an alien, so maybe that will be explored in season two; maybe not that he's a full-blown alien, but that potentially he has incredible powers too.

Aidan Gallagher, who plays scene-stealing Number Five, has been toying with fans online since the series' debut. He led fans to believe he wasn't returning for season two - but we're sure he will.

I stand by my tweet: "I will always look back and say wow that was the coolest role I ever played" - Aidan Gallagher

How is that not clear enough for everyone?https://t.co/INYXS9mSBQ

He's even responded to questions from fans, such as what happened to the other 36 kids with superpowers?

We would find out in seasons 2-8 if Netflix wants you to know. https://t.co/JAMo6UAZte

When is season two arriving on Netflix?

Again, this is most likely a very closely-guarded Netflix secret. While we expected season two to arrive early this year, it's more likely that we'll see the superheroes return around the summer. There has been a lot of buzz around the show of late, so we might get confirmation on that from Netflix very soon.

Due to the success of season one, it's likely Netflix will be hedging their bets on more seasons of 'The Umbrella Academy' in the future too. Showrunner Blackman told Indie Wire previously: "I hope we get a second and third and fourth season, but I knew that having a great ending is important for Netflix as a streamer. You really want people to say, 'I’ve got to come back and watch what happens'." And a memorable ending is certainly what we got.

So what will the story revolve around this time? We've had the end of the world already - so that's out. We've had one of their own turn into the bad guy - so that's not likely. As we've said above, we reckon the second season will be more focused on Hargreeves and the children before Ben mysteriously died. Will they be transported back into their younger selves' bodies with the knowledge that they know now? Anything is possible. 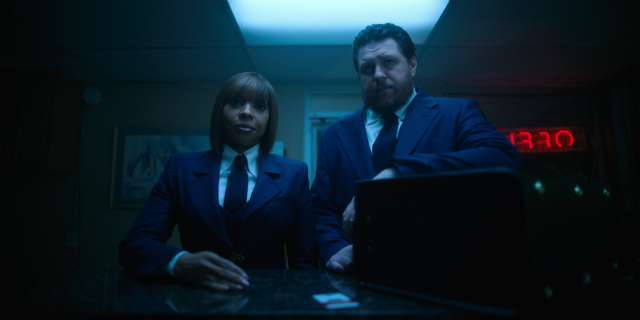 Mary J. Blige and Cameron Britton as Cha-Cha and Hazel

Kate Walsh's The Handler will almost certainly show up at some point to continue her role as the head of the time-travelling organisation that Hazel and Cha-Cha worked for. Will she attempt to track down her employee who's gone rogue? Or maybe she'll send more replacements to take down Number Five.

One theory that we don't think will happen, is one that points to the gang travelling to 1963, when US President John F Kennedy was assassinated. Given that Number Five already went back there in season one, we don't think the scriptwriters will regurgitate that scenario all over again. Having said that though, Hargreeves and Kennedy worked closely together in the comic series - so maybe it could feature somewhere along the way.

While 'The Umbrella Academy' season two is around the corner, when exactly that is is still unknown. In the meantime, check out our list of 10 things you might not know about season one here.

The tenth season of 'American Horror Story' won't arrive until 2021