The biggest clue yet has been dropped as to who and what Control, Section 3's rogue AI, really is.

After last week's episode dropped in the long-awaited identity of the Red Angel, this week's episode picks up the reveal and carries it forward to a place you wouldn't necessarily expect.

The Red Angel, the beacon that the second season through its arc, is none other than Michael Burnham's previously-believed dead mother, Gabrille Burnham (Sonja Sohns). 'Perpetual Infinity' reveals that Gabrielle was working with Section 31 on a power-suit that could jump through time, however when the Klingons attacked their research facility, she climbed into the power-suit and jumped back in time to stop the attack. 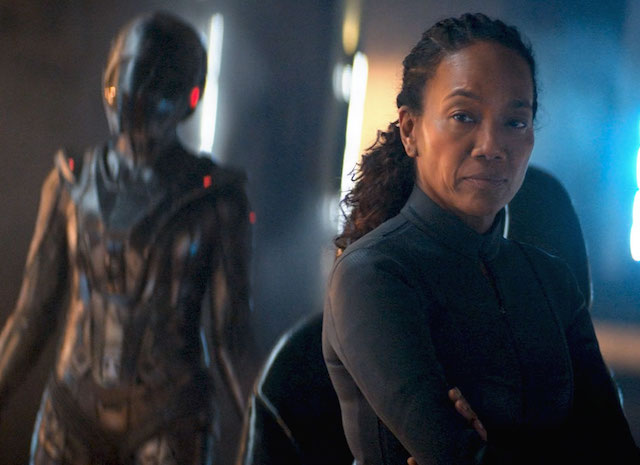 Instead, the unstable nature of time-travel meant that - you guessed it - she jumped too far into the future and landed 950 years away from where she began. As you'd expect, after spending the guts of two decades jumping through time, Gabrille has figured out that the only way she can stop the complete destruction of all sentient life is by destroying the information sphere from 'An Obol For Charon' that Control, Section 31's rogue AI, needs to evolve.

It's here that we get the biggest clue yet (and it may just be misdirection) that Control already exists in the future of 'Star Trek' that we, the audience, have already seen. In last week's episode, Leland (Alan van Sprang) was rendered blind by Control in a particularly gnarly moment. Control, it seems, needs to evolve in order to survive - and plans to use Leland to do so. When it first addresses him as a hologram of himself, he pointedly - way too pointedly, to be honest - remarks that the "struggle is pointless." That, in itself, should throw up a red flag for any Trekkie.

If, in fact, this season of 'Star Trek: Discovery' is the origin story for the Borg - one of the most terrifying villains in all of 'Star Trek' lore - then it's a pretty bland one. More than that, however, is the fact that what's made the Borg so terrifying has been their mystery. They've always been present throughout the history of 'Star Trek', but while their motivations have always been clear - perfection, not destruction as Control seems to be pushing - their origins were murky and that made sense.

So much of 'Star Trek: Discovery' this season has been about correcting the flaws in the first season, but now that it's coming in closer to an ending, where does it go from here? 'Perpetual Infinity' finishes out with Gabrielle Burnham returning to her own time, Michael vowing to find her, but beyond that, no clue as to where it's all going next.

Everything they've tried so far has failed to defeat Control, so what now? While 'Perpetual Infinity' ends on a hopeful not - Hipster Spock invoking logic and instinct that'll win the day for them - you have to wonder if it can save the season.

With just three episodes left, they better come up with something fast.