The identity of the Red Angel is finally revealed, and it's exactly who you thought it was.

At long last, after 10 episodes, we finally have a conclusive answer to who the eponymous Red Angel is and why they keep appearing at different sections of the Star Trek galaxy.

To be fair, having it as a reason for the Discovery to ping across the stars is much better than the vague "five-year mission" that the Enterprise had. It's made for some cracking episodes, so now that the identity has been revealed, what now? We'll circle back to that, but for now, let's talk about how they actually planned to trap the Red Angel.

Not only is it kind of bonkers, and certainly not what you'd expect from 'Star Trek', but it's the only logical thing that could be done. Deducing that the Red Angel / future Michael Burnham only appears when present Michael Burnham (Sonnequa Martin-Green) is in trouble, they then logically decide to put her in trouble in order to force her appearance.

'Star Trek' Day is on the way, will reunite former cast members

'Star Trek' Day is on the way, will reunite former cast members

As Hipster Spock (Ethan Peck) correctly points out, the issue is simply a "Grandfather Paradox", and that the only way to know where the Red Angel will appear is by putting Burnham in harm's way. The only person who seems to get that that's a terrible idea is - as you'd expect - Captain Pike (Anson Mount), but so what? That's the only way it's going to work, and considering that all sentient life is facing extinction, this is how it has to go.

The episode builds up to this moment, but the real meat of the episode comes from not only Burnham discovering the how and why of her parents' death, but also in how she faces up to the reality that she might very well die. Of course, this being 'Discovery' and her being the lead character, we know she'll survive. There's a key moment with her and Ash Tyler (Shazad Latif) that demonstrates what kind of an actor Sonnequa Martin-Green is, and the intensity of it is something you'd only ever see once or twice in the entire franchise, never mind 'Discovery' on its own. 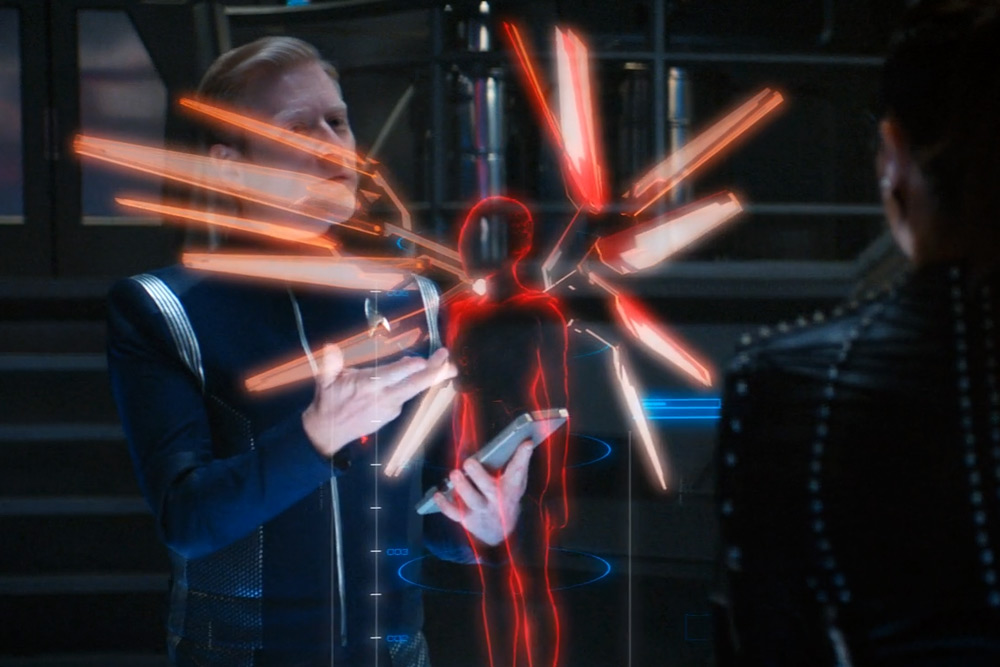 Lt. Commander Stamets (Anthony Rapp) figures out how the Red Angel is jumping through time - and how to trap it

Let's get to the Red Angel. The final scene of the episode reveals what many people suspected, or certainly had theorised as one of several possible candidates. Revealing it as Michael Burnham's mother, played by the incredible Sonja Sohn (you'll know her from 'The Wire' as Kima Greggs), was actually a really smart move. Trying to tie up a time-travel story and give it some kind of emotional context and relevance is incredibly difficult, but bringing in a family member - be it a brother, a sister or in this case, a mother - immediately drops out the confusing time-travel elements and turns it into a family story.

Trying to make time-travel emotionally relevant for both the actors and the audience is truly difficult, and it's why they often don't connect with audiences. How do you wrap your head around something like that, when it has absolutely no basis in reality? You can't, so you have to put it in a context which everyone can understand - hence, a family story about a mother trying to protect her daughter at any cost, even if it means her taking control of a power-suit and slipping through time in order to save her.

Where it goes from here is anyone's guess, but given how smartly they've handled it up until this point, the hope is that it continues on the same level.