"Everybody looked at me like I was absolutely insane."

*Spoilers below if you have not watched 'El Camino' yet.

Fans got to see Pinkman ride off into the Alaskan sunset, woolly jumper and all, with his new alias of Mr Driscoll in the final moments of 'El Camino'. An ending that both Gilligan and Paul hinted they would like for the character in many interviews since the end of 'Breaking Bad'. In fact, Paul even told this to entertainment.ie back in 2015 when he was in Dublin, saying, "I would like to think that he [Jesse] just kept driving, I would assume that he would want to see Brock again, I think that's his only tie to Albuquerque and he would definitely blame himself for Brock's mother's death. But maybe he just wants to get away, so maybe he just kept going. I like to think that he drove up to Alaska, went into hiding, maybe did some more woodwork, started a class."

However, Gilligan got a new plan into his head for a while which thankfully he was talked out of. Speaking to Entertainment Weekly, he said, "I thought it was up to the audience to figure out how Jesse got away, but that it was enough to see him driving off into the night victorious. But then as the years started to pass, I found myself wondering at idle moments, ‘How exactly did he get away? Because that’s no easy feat! And what if he didn’t get away? What if he got busted right around the next corner?." 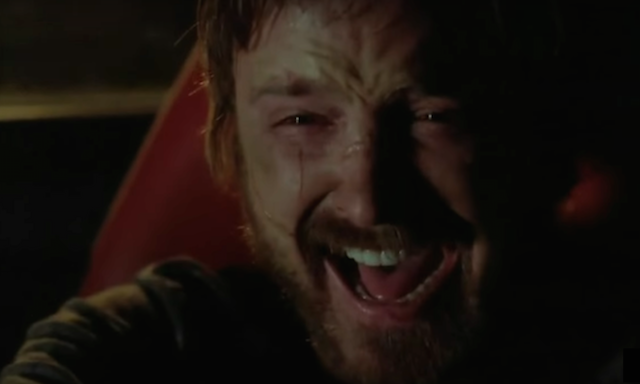 He adds, "I didn’t get super far down the road, but it was probably going to be a young woman who needed some help. He was hiding out by the Canadian border, and this woman was working at a motel as a housekeeper or something. [He] goes into the process of saving her, knowing full well that he’s going to suffer for it, he’s going to get caught for it, but he does it anyway. And the last scene would be maybe him in a jail cell but at peace for the first time since the movie began. I think there was going to be this component where he couldn’t sleep. He wouldn’t get a single night sleep for a week or so upon escaping. The police are looking for him and he’s too haunted and he’s too adrenaline-charged. And at the end of the thing, he’s in a jail cell, and ironically he can fall asleep like a baby. And I thought, ‘Ah, that’d be kind of cool.'"

Nobody agreed with him thankfully. "I pitched some version of that to my girlfriend Holly," he says, "and I also separately pitched that to ['Breaking Bad' executive producer/'Better Call Saul' co-creator Peter Gould] and the writers and everybody looked at me like I was absolutely insane: ‘You can’t have Jesse back in a cell at the end of the movie! People will tar and feather you!’ I’m glad I listened to them. I think there is a version of that movie that if perfectly executed would work, but I don’t know that I was the guy to pull it off. I’m glad I wound up doing it the way I did it."

There's another ending that made it much further but was left on the editing room floor which Paul admits he was "really crushed" about. As Jesse was driving away, we would have heard him reading the contents of his letter to Brock.

"That letter to Brock was the very first thing that Vince wrote when writing this script,” Paul tells EW. “Once he completed that letter, he started the script. Originally the voiceover of that letter was how the movie ended — just driving through Alaska and you could hear what was inside of that letter…. It’s heartbreaking, it’s beautiful, just honest. But Vince just thought, ‘You know what? Maybe it’s best left unknown.’ And we don’t need it. He was right. But I love knowing what was in the letter."

As much as we are curious to know the contents of that letter too, that ending sounds like it could have been a little bit cheesy. Jesse/Mr Driscoll's ever-so-slight smile as he drove away was perfect.

Although what are the bets there will be a sequel down the line called 'Mr. Driscoll' where Brock tracks Jesse down to avenge his mother's death? It writes itself.