Greg Daniels, who worked as executive producer on two of TV's most-loved comedy shows ever - 'The Office US' and 'Parks and Recreation' - has a brand new comedy series making its way to Amazon Prime this May.

Set in the not-too-distant future, the concept of 'Upload' follows the lives of two characters who are living in different worlds - literally. Nathan (Robbie Amell) gets himself into an unexpected car crash, forcing him to choose between either dying normally or to have his brain "uploaded" into a virtual afterlife in Lakeview.

Here, he can live out the rest of his everlasting life, overseen by his "angel" Nora (Andy Allo), whose job it is to ensure Nathan's afterlife is as smooth-running as possible.

Here's our 'Upload' interview with series creator and executive producer Greg Daniels, who was joined by Andy Allo and Robbie Amell.

Greg, what inspired the story for 'Upload'?

GD: I think our increase in technology has changed the world in such a profound way, and people are dealing with the world through technology. We're always trying to connect with each-other. A long time ago I was watching the introduction of compact discs (CDs), and there was a lot of adverts around digitising, and I thought - well, what would be the most digitising thing you could do, digitise yourself? Then human beings could create their own afterlife. And what would that be like? I was working on it for years and years, and as a book first of all. But my children used to play a game online called Club Penguin, and were always asking for money to upgrade their houses and how they looked, and I saw the comical element of this and infused it into a series where you are trapped within a machine, essentially. 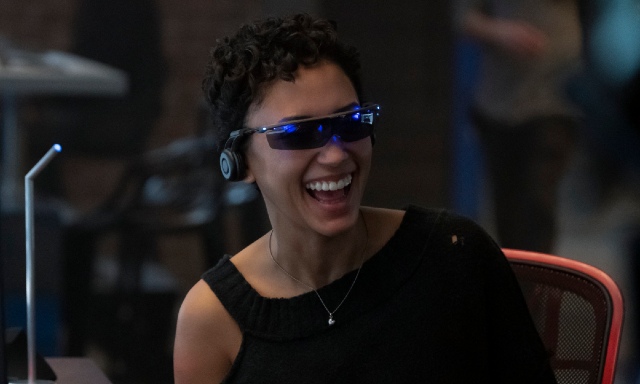 Andy and Robbie, what did you like most about your involvement in the project?

AA: I really just love the world that Greg created. It's so layered and it also makes you think. And It's very relatable and funny. What drew me to Nora is her heart, she really cares about the people in her life and her clients at Lakeview. And she's also a bit of a hopeless romantic which I completely identify with! So she's just a character where you get to see the world through her eyes and her perspective, which is really cool.

RA: I agree, and also Greg once described the show as not a Utopia or a Dispotia, it's a "Middletopia". I think that's so much more interesting as a comedy on a Utopia would probably get a little boring after a couple of episodes. I think this show really makes you think about what it would actually be like if it really did happen. What drew me to the project was Greg, right off the bat. He's so smart and so funny, but also so collaborative. He created a great work environment throughout the whole process, and was really great from start to finish.

The series is set in the future, and there's lots of different items, gadgets and virtual reality things in the world - Nora is able to make her farts smell like cinnamon for example. Which ones would you love to see in our reality right now?

AA: *Laughs* Yes, that would be amazing! I would love the 3D food printer, especially now that I'm home so much. And I love to cook, but on the nights that I really want a fresh croissant from somewhere it would be great to print that and have it taste exactly how I remember it.

RA: I really love the memory parlour in 'Upload', the ability to watch and live-out a memory in perfect detail in front of you was just very sci-fi and very cool - but doesn't feel that "out there" to be honest.

GD: A lot of them are very plausible, and often how we came up with the ideas for them was looking at the consumer electronics show in Las Vegas. There are so many drones in the show, and one joke that didn't make it into the show is a business idea of a drone that walks your dog for you. And the tagline was: "Now YOU can sit and stay". But I am also hoping to get a free pass to Amazon's Digital Afterlife when they create it, for having done the show.

Greg, the concept of 'Upload' might not be well-received from religious groups...

GD: It's interesting... there's a story about a man who in a flood is sitting on top of his house, and he's praying for god to save him from the flood. And his neighbour comes along in a canoe, and the man says "my faith is so powerful I'm not going to get into your canoe because god will save me from the flood" and then he drowns and he goes to heaven. God says "but I sent you a canoe, what was your problem?", and when you think about the premise of 'Upload' perhaps this is the way we are all going to get to heaven. Maybe god will inspire scientists to come up with a solution to save everybody. But throughout the show, there are different religious people who do not agree with other people "uploading" and they don't consider that to be a valid thing. It's a big discussion on the show. 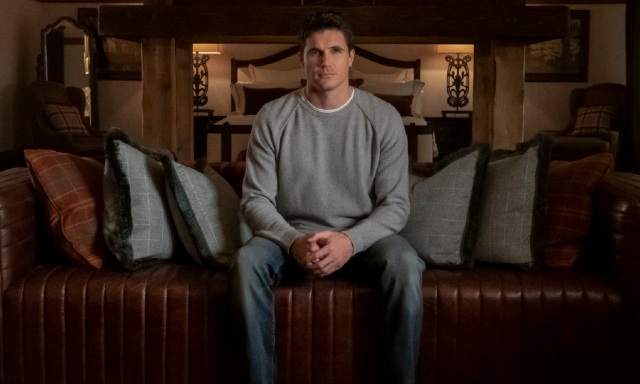 Greg, did creating the show for Amazon Prime in these "binge-worthy" times we live in influence how you wrote the show?

GD: A great question, that is very much one of things that attracted me to doing this, was to try and write in a different form. It took a while for me to adapt. Amazon are very good at giving notes, and they kept asking me to approach it like a five-hour movie. I found it very exciting to write for streaming, as it allows you to be more "novelistic" for your aims as you know everyone watching has seen all of the episodes before this. When I did broadcast television, even the most dedicated viewers might skip episodes so you might have to repeat yourself. Ironically, some of the biggest shows on streaming websites are things that were originally made for broadcast. I talked to people who are watching 'The Office US' and they watch it straight the way through so they get to experience the arc of it more than when it first aired perhaps and missed some episodes.

Robbie, was the bathroom scene in episode one as fun to shoot as it is to watch?

RA: *Laughs* That's my favourite scene. I bet we have about 15 minutes of other footage from that shoot, she did so much goofy stuff. We filmed that scene about halfway through the pilot and that gave a sign as to what kind of tone the series is going to be at different times. Greg is always great at having a fine line between things being goofy and things being dramatic and we just had so much fun playing this scene. Greg's son Owen who is in the scene with me - I tried to make him laugh and break character, but it was next to impossible.

GD: That was very improvisational, and a lot of that was just Robbie coming up with different ways and moves.

Would you "upload" yourself if you had the choice?

RA: I'd probably upload tomorrow if I could. I think the good would outweigh the bad. I think Greg posts interesting questions throughout the show like Capitalism and greed, but with that being said I think most people are going to try and live as long as they possibly can. And we don't have to deal with nagging health problems like we do in the real world. But ultimately it comes down to spending more time with your friends and family and I would take that 10 times out of 10.

AA: YES! I can't wait! Jumping off of that, one of the characters in the show, Ingred, her grandmother is in Lakeview. There's a scene where her character and another can cross paths and have a conversation, that might never have happened without her being uploaded and is such a beautiful opportunity.

GD: I would definitely do it too. Depending on how you view life, you have to take the good with the bad and I would take it to be able to hang out with other humans.

If our 'Upload' interview piqued your interest in the new comedy series, it premieres on Amazon Prime Video on Friday, May 1.

Fans react to the first 'She-Hulk: Attorney at Law' trailer