Netflix review: 'Outside the Wire' is thrilling enough to keep you entertained

If sci-fi war movies are your thing...

Do you like war movies? Guns? Explosives? Futuristic war-robots? Well then, we've got a Netflix movie just for you.

'Outside the Wire' is set in the year 2036, during which a violent civil war has erupted in Europe. US troops have been deployed as peacekeepers in an area within this "lawless new frontier", in the hopes of putting an end to the faceless criminal warlord in charge of the operation, Victor Koval. The US military has developed robotic soldiers - Gumps - who are able to go further into the field than their human counterparts.

We begin the story by encountering Lieutenant Thomas Harp (Damson Idris), who is a drone pilot, seated behind computer screens and in charge of unleashing explosives on command. However, Harp goes against direct orders and is re-deployed where he will work on the field under Captain Leo (Anthony Mackie), who is "not like us". Leo is the first android prototype, many generations ahead of these Gumps. And so, with no one really watching what this robot does, he takes his new recruit (who has no field experience) on a ride into unknown territory "outside the wire".

The age-old buddy-action movie trope has been done countless times - mostly in the comedic form in recent years - so it is mildly refreshing to see it play out here. And while there is moment after moment of action on display - there's not much else. Apart from their initial meeting, the moments shared between Harp and Leo feel forced. The storyline, which sees America as the good guys and Russia as the bad guys, is confusing one moment, and painfully obvious the next.

Netflix has been churning out mediocre action flicks of late - 'Extraction' and 'The Old Guard' are just a couple of examples - and audiences are loving them. This will no doubt have another similar outcome. 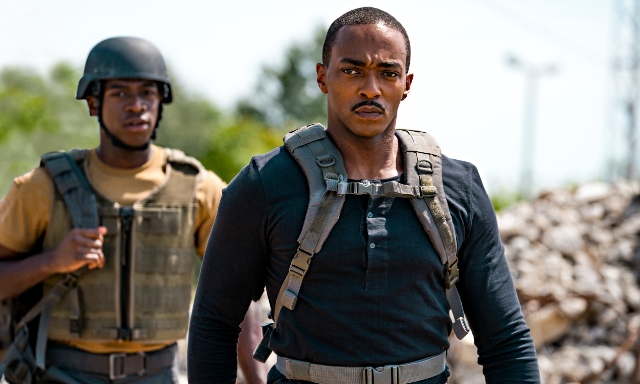 Having said all that, 'Outside the Wire' does make for a faintly exciting watch. This author is not your typical futuristic/killer robot/action hero fan, but it has to be said that their attention was kept for the full two or so hours of the movie. It doesn't reinvent the wheel, no, but it is engaging enough for you to be curious about how it all turns out in the end.

Anthony Mackie and Damson Idris deserve praise for keeping the momentum going here. Mackie proves that he is a natural progression in terms of what an action star can be, finally getting more time to shine in an action setting (his scenes of hand-to-hand combat manoeuvres are on point). Now we're more excited than ever to see how 'The Falcon and the Winter Soldier' series plays out later this year. Idris is one name to remember for the future too, holding his own as the movie's main protagonist.

'Outside the Wire' drops on Netflix Friday, January 15.

11 escapist movie recommendations you can watch on demand right now