Netflix review: 'Behind Her Eyes' will keep you hooked until the very end.

A limited series worthy of your time

We envision that Netflix's 'Behind Her Eyes' will cause quite the stir among viewers once those credits roll. Based on the novel of the same name by author Sarah Pinborough, 'Behind Her Eyes' is a satisfying inclusion into Netflix's ever-growing thriller/drama collection.

The series begins with us being introduced to single mother, Louise (Simona Brown). She gets stood up on her girl's night out but encounters the charming David (Tom Bateman), and the pair share a brief kiss. Fast-forward to Louise meeting her new psychiatrist boss, who turns out to be the man from her night out *cringe*. A married man, the pair agree to keep a professional relationship. However, when Louise bumps into David's wife Adele (Eve Hewson), the doting wife is keen to make new friends and the two women strike up a friendship.

An inevitable love triangle of sorts rears its head, and each of the characters must deal with the messy consequences. And yet, 'Behind Her Eyes' is just getting started.

Much deeper than just a run of the mill love triangle storyline, as well as the series getting steamy in parts it is also concerned with mental health issues, drug use, the struggles of being a single parent, and being part of a controlling relationship. Louise, who suffers from sleep paralysis, also wishes to find a way to stop these nightly occurrences. 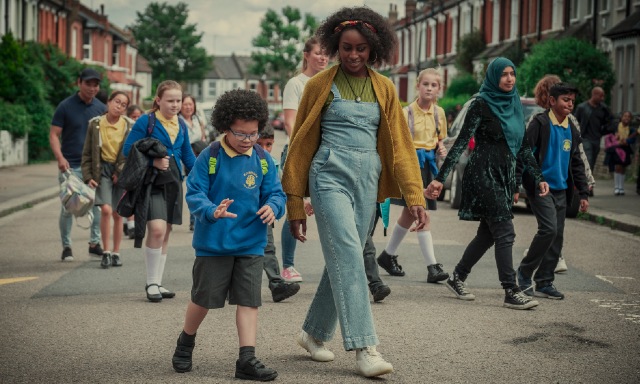 Now, there comes a point in the six episodes that a much deeper, psychological ideal will come into play. And this is when things really begin to lean into the "WTF". We won't give away any spoilers at to what that pertains to, but trust us - stick with it until the very end, it'll all make sense.

From when we first meet her, Simona Brown as Louise is instantly comforting. She puts the viewer at ease - wine glass always in hand - and offers us a glimpse at how one little night-time occurrence can begin to tip someone over the edge. Eve Hewson as the ever-chipper wife Adele is awkwardly robotic in comparison, which at times can be quite off-putting. An eery performance by Hewson ensures that there's always a certain air of mystery around her character (Hewson shines in Adele's backstory as a younger, less troubled girlfriend to David, which also features Robert Aramayo as Rob). Tom Bateman as the final part of the leading trio impresses as a psychiatrist battling with his urges - being just problematic enough to have us question his motives.

And as for what happens during that final episode? Our lips are sealed.

Produced by Left Bank Pictures ('The Crown') and written by Steve Lightfoot and Angela LaManna, 'Behind Her Eyes' arrives on Netflix February 17.