The Amazon Prime series is back to form

Is it any coincidence that 'American Gods' lands on Amazon Prime a week before Trump leaves the White House? Fat chance.

'American Gods' has always been brazen about the social commentary of America. When author Neil Gaiman wrote the book 21 years ago, little did he know how much of the essence of the book would remain a topical subject all these years later - perhaps now more than ever.

The supernatural/action series based on his book of the same name follows the life of newly-released convict Shadow Moon (Ricky Whittle), who begins working for a mysterious man named Mr. Wednesday (Ian McShane). Before he knows it, he is thrust into the realm of Old Gods vs. New Gods, with a monumental clash between them on the cards.

Each one of them has their own unique ability, and in season three we'll see Shadow attempt a new beginning for himself in a quiet middle-American town, even going so far as to change his name. But for those of us who read the book know, Shadow will soon realise that not everything in this perfect living is as it seems.

Ahead of the series' return, we were able to catch up with Gaiman and actors Ricky Whittle (Shadow Moon), Yetide Badaki (Bilquis), and Bruce Langley (Technical Boy).

Gaiman said of season three: "This year [2020], everything felt more relevant. It felt like we were talking about and inhabiting a world in which it was really important to be having a mixed-race lead who gets into trouble in a small American town for being black.

"It's important that we have characters like this. Characters like Bilquis, Salim, Mr. Ibis - that we're following them and their struggles through a story at a time when what you believe is much more important than it should be. The struggles between the old and new are playing out live on our screens every day. And we're sitting in the middle of it with 'American Gods', which was never my intention." 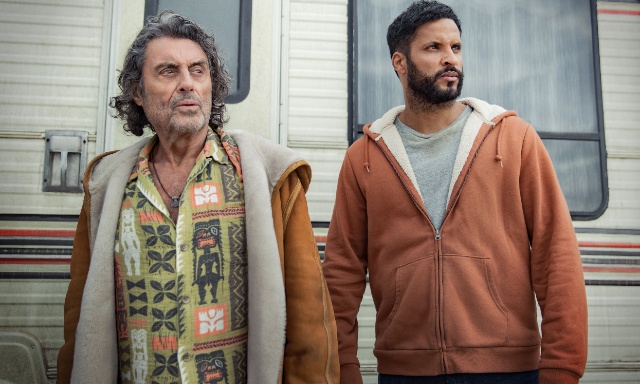 On which character he found to be the most intriguing to concentrate on this season, Gaiman said: "Bilquis is one of the old Gods who understands that the gifts of the new Gods may actually be usable. That it isn't just good guys and bad guys, which is what it was never intended to be, but allowing Bilquis to be the character to show us this is amazing."

Gaiman also went into how he thought he understood America, before moving to live there in 1992. He told us: "When I moved to America, I thought I understood is all. I knew what this country was from movies and TV shows, and American books. And then I moved here and realised - it was so much weirder than I had ever imagined. It influenced me to write this book in the first place - I'm seeing all this weird stuff and I want to tell you all about it."

He did reveal that season three is "less bombastic" than the previous two, and much "more smaller and more personable" than we've seen before. 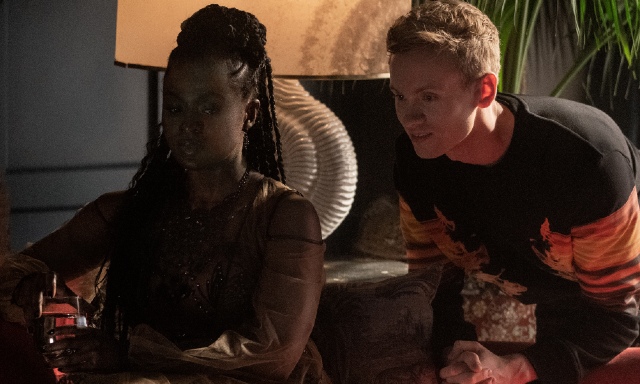 Yetide Badaki and Bruce Langley as Bilquis and Techincal Boy

Yetide Badaki, who plays the incredibly mysterious Bilquis, and Bruce Langley as the power-hungry Technical Boy, also informed us of how their characters will play out his season. Badaki told us how much her character inspired her, which eventually led to her being more open with herself: "I cannot wait for everyone to see the entire season, because the self-discovery journeys really end up in some fascinating places.

"For Bilquis in season one, she was discovering herself, and in season two beginning to thrive. This season she finally finds her drive. We'll see the different aspect of her, the different capabilities that maybe even she herself forgot along with way.

"It is a gift to play her. She opens me up a lot. It's important for me to play someone that has empowered so many. I've heard from so many individuals that she owns her sexuality, how it has inspired many individuals. Her own openness inspired me, as this year I came out as bisexual - but there's something in the way that Bilquis so freely experiences that seems to resonate and encourage people to own up to their truths."

While Langley said: "For Tech Boy we get to see a little bit more of 'the squishy bits in the middle'. Who he is, why he is. And see how he will adapt to not being able to have access to some of his favourite toys. We get to know a lot about him along the way, and the same is true for many of the other characters this season."