'Love Is Blind' took Netflix by storm in recent weeks. It seems that people all around the world lashed through the reality dating series.

The 'Love Is Blind' couple that provoked the most wtf moments had to be Jessica and Mark.

They'd a ten year age gap and appeared to have little to no chemistry. Thus it was no big surprise that when it came to the finale, Jessica said no to Mark at the alter.

However the then 24 year old Mark insists there was a lot of sweetness to their relationship. They shared several tender moments that didn't make the final cut.

Mark told EW: "I think they missed out a little bit on why Jess and I connected. We didn’t just connect because Jess and I were from Chicago, like oh, she’s the one, we really connected on a deeper level.

"We'd a gift-giving day, we had a nacho and queso day, we did things. We were actually really goofy with each other and had a lot of fun.

"Because it is very intense and serious, what we’re doing, a lot of those relief moments of like, wow they’re normal people, I think got missed out.

"By the end of it, Jess gave me a daily devotional and we really connected on that. I gave her my grandmother’s bracelet -- my grandmother had passed away three years ago. And so for me, that’s me being like, hey you’re a part of my family. It was deeper.

"That’s why I feel the connection her and I had was so real. We got to be vulnerable regardless of the age and all that other stuff." 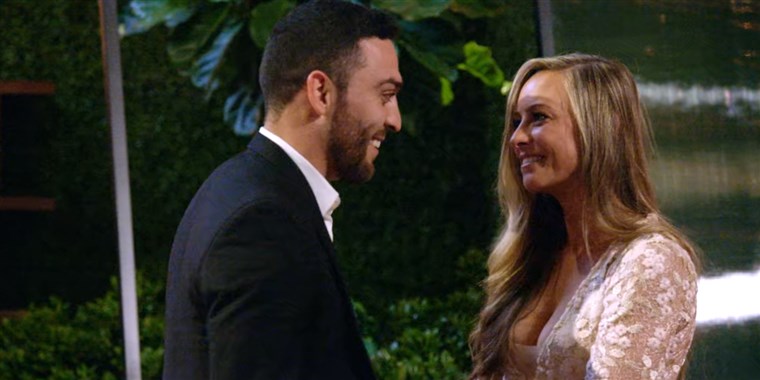 Mark also explained why he gave Jessica a sweatshirt the first time they saw each other outside the pods. This was after getting engaged.

"The funny thing that people don’t know, the day before I proposed, they were like, "Is there any last things you want to give to them as a gift?"," he said to EW.

"I didn’t know she was doing this but she sent me a pillow case with a bow on it that had her perfume on it. She said, "I can’t tell you what I’m deciding but I hope this gives you comfort."

"I’ll never forget the way it smelled. She gave me that, and when I saw her, I made it a point to walk across and I gave her my sweatshirt that had my cologne on it and said, "I wanted to return the favor," so that way she didn’t forget about me. A lot of that stuff like that was missed."

'Love Is Blind' is streaming on Netflix now. There'll be a catch up episode of the reality series next month.