Let's talk about that 'Behind Her Eyes' ending

Shocked isn't even the half of it

*MAJOR SPOILERS FOR THE ENDING OF THE NETFLIX SERIES BELOW*

Knowing that this limited series is based on a book, we can only imagine how the reader must have felt reading that shocking plot twist. As a viewer, it was a moment which floors you to the very core, coming out completely left of field. It's as clear as day now why all three of the main characters had either a wine glass or a stiff brandy in hand. Here's what we made of the 'Behind Her Eyes' ending.

First off, the supernatural tone of the series was there from the beginning - we just didn't realise. If you remember in the earlier episodes, from episode two onwards, the camera would sometimes be from a higher viewpoint, looking down at the characters. Sometimes Louise would be having a glass of wine at home on the sofa while we looked at her from above. It would be a brief, fleeting moment, one which the viewer could easily brush off as something not to pay too much attention to. This was Adele/Rob creeping on the unsuspecting mother.

However, for Adele to do this, she had to know where Louise lived, and be able to picture her apartment and know its ins and outs. This is why, when they both go to the gym for the first time, we see Adele snooping around the place, taking it all in. The first time we notice the camera shot from above is when David enters Louise's apartment unannounced after work in episode two, leading to the pair sleeping with each other. We hear an intake of breath as the camera follows her cheating husband.

Rob's diary is another important keypoint for the 'Behind Her Eyes' ending to happen. Without his step-by-step guide as to how a person can project their soul to be out of their body, Louise would not have been able to overcome her sleep paralysis and nightmares. Adele was helping her overcome one obstacle while leading her down the garden path to an even worse ending. 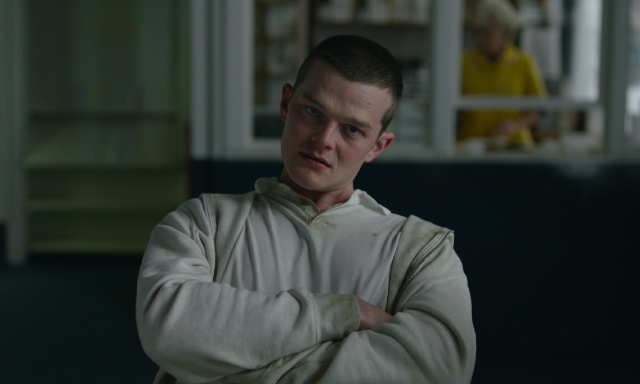 And so, onto that dastardly ending. We had indications throughout the series that Rob had a crush on David, but it was finally revealed in that flashback of the three of them eating dinner at Adele's family manor. Rob spies on the couple having sex, while in spirit form. Next thing we know, Rob has died by falling down the well in the forest. The plot thickens.

After Louise meets Marianne down in Brighton and finds out that Adele broke into her house, Louise finally has evidence for not trusting this woman. After an intense phone call between the two, Louise receives texts from Adele believing that she is about to take her life. We are, once again, lead down the wrong path, all signs pointing to Adele about her overdose.

A concerned Louise makes her way to Adele and David's house, only to find that it's all ablaze. With no way in, she'll have to project herself into the spirit realm again and see if Adele is in the house. Little does she know that Rob's blue spirit was in Adele's body this whole time, and he floats down into Louise's soul-less body outside. She wakes up in Adele's body, unable to move, with Louise/Rob now heading upstairs to administer a final, deadly dose. Rob had swapped bodies with Adele years prior, and killed his friend in order to be with David.

A truly unexpected ending. While the show struggled at times to keep our attention mid-way through the series, this dramatic climax more than makes up for its past mistakes. It's the type of twist ending we've been waiting to see on our screens for a long time - one that nobody was expecting. Not since - dare we say - 'Game of Thrones' Red Wedding have we felt so uncomfortable yet strangely satisfied with a TV twist.

The final moments of the Netflix series sees a new Louise/Rob get hitched to David and they drive off together for their honeymoon with her poor, poor son Adam. Our heart pours out to that little guy.

What did you make of the 'Behind Her Eyes' ending? Let us know in the Facebook comments (but be sure to keep it spoiler-free for those still catching up). Read our review of the series here, or watch our Mini Review below.