Yep, it looks like 'Avengers: Endgame' is clocking in at over three hours

Maybe go easy on the beverages before and during 'Endgame'

A leak from AMC Theatres in The States allegedly confirms the runtime of 'Avengers: Endgame'.

How is your bladder control? Because it's about to be put to the test come April 25th.

News coming in from IGN is that 'Avengers: Endgame' looks set to have a runtime of three hours, and 2 minutes. If this is true, then the Avengers culmination movie is set to be the longest Marvel Studios creation ever, by over half an hour. 'Infinity War' was the previous longest-running title, at two hours and 29 minutes.

Leading movie theatre giant in America, AMC Theatres, has accidentally posted the run-time on their website. Clocking in at three hours and two minutes, the title card for 'Avengers: Endgame' is an ominous "Part of the journey is the end."

Here is said screen grab, which has since been removed from the AMC Theatres website. 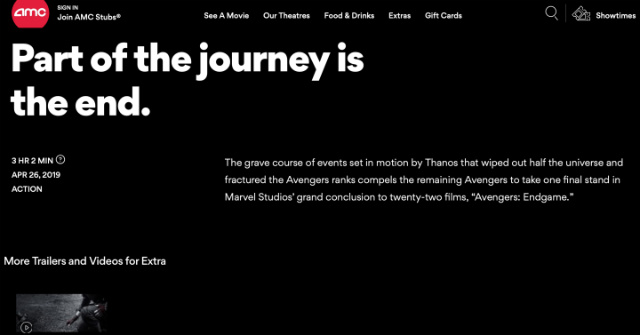 The runtime for 'Avengers: Endgame' has allegedly been revealed

IGN have reached out to Disney, who have yet to confirm the leak. And yes, we really hope it is true because we cannot wait for the superhero jaunt, particularly since Captain Marvel appeared in the newest trailer. And just in case you want to watch it for a 10th time, here it is for you again.

See you in the toilet queue, post 'Avengers: Endgame', when it gets released in Ireland on April 25th.