Everything you need to know about 'Rocketman', the Elton John biopic

The 'musical fantasy' hits cinemas in May

Music legends like Johnny Cash and Queen have been the subject of previous biopics. We can't be the only ones who've been waiting for one to be made about Sir Elton John. Now at long last 'Rocketman' depicts the life of the singer-songwriter.

Here's everything we know so far about 'Rocketman'.

Based on a true fantasy. @Taron.Egerton is @EltonJohn in #Rocketman, in theatres May 31. 🎹

Named after one of Elton John's biggest hits, 'Rocketman' is a biopic with a difference.

The official synopsis describes it as a:

So don't be surprised if there are some more fantastical elements in it than your typical, straightforward, dramatised life story.

The movie will cover key periods in Elton John's life, from his years as a prodigy at the Royal Academy of Music to his influential and enduring musical partnership with Bernie Taupin. We'll also see his struggles with depression, substance abuse, and acceptance of his sexual orientation.

What's the history behind the movie?

The biopic has been in the works since 2011. Elton John was developing the biopic and said he hoped Justin Timberlake would play him.

By 2013 Michael Gracey (who went on to direct 'The Greatest Showman') was hired to direct; Tom Hardy was going to play John at this point.

The project went quiet for years until July 201 when it was announced Hardy was no longer involved and Taron Egerton was replacing him. Then Dexter Fletcher replaced Gracey as director.

If you're looking forward to 'Rocketman' and were a fan of 'Bohemian Rhapsody', there's good news for you. Director Dexter Fletcher helmed both movies (though Bryan Singer was credited as director due to DGA rules).

Elton John himself is producing the movie, through his Rocket Pictures along with Marv Films and Matthew Vaughn. Vaughn directed 'Kingsman: The Golden Circle' which starred Elton John as himself as well as Taron Egerton, who plays the musician in 'Rocketman'. 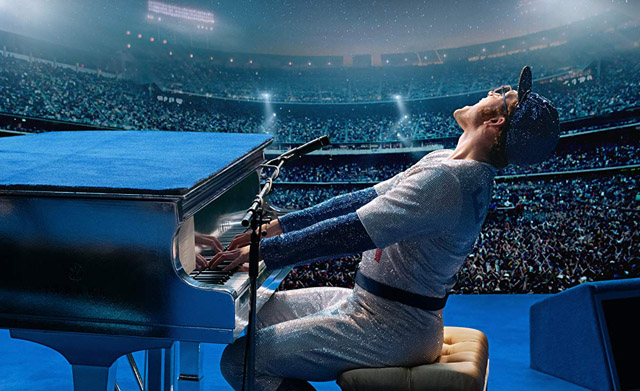 As we said, Taron Egerton, who is best-known as the lead in the 'Kingsman' movies, plays Elton John.

Wrapped. One of the greatest joys of my life so far. #Rocketman

Egerton previously showed off his singing chops in the hit animated feature 'Sing' so we've no doubt that he's going to be terrific.

When can I see 'Rocketman'?