A number of the cast and crew members of 'Black Panther' have paid tribute to Chadwick Boseman, who passed away last weekend.

The actor played T'Challa, the alter-ego of superhero Black Panther, in the Marvel franchise.

He died aged 43 after a private battle with colon cancer.

Tributes for the talented actor and trailblazer have been pouring in over the past few days.

Ryan Coogler, who directed 'Black Panther', penned an essay to the actor (via THR). 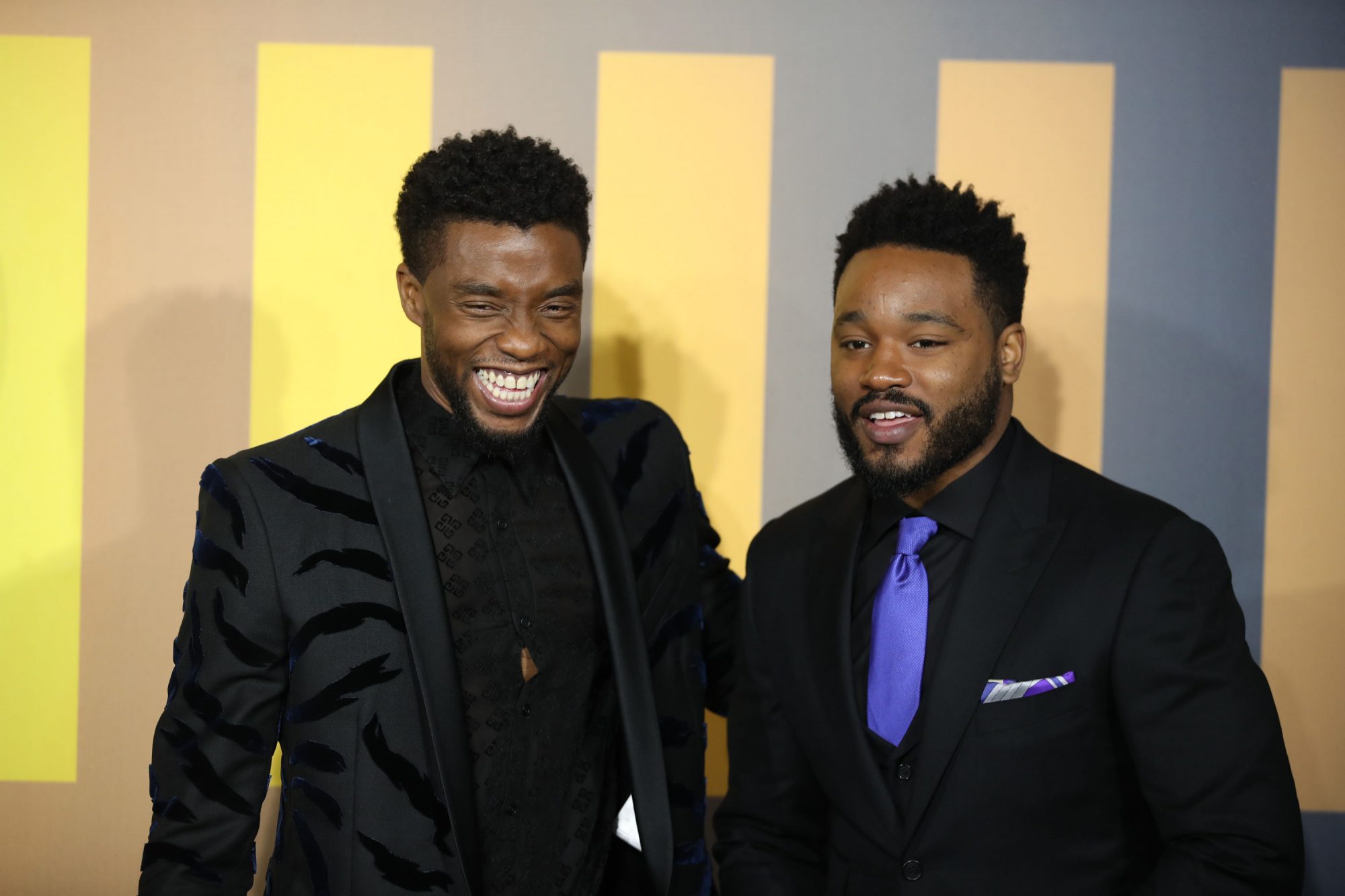 He described the actor as "an anomaly. He was calm. Assured. Constantly studying. But also kind, comforting, had the warmest laugh in the world, and eyes that seen much beyond his years, but could still sparkle like a child seeing something for the first time."

He talked about watching 'Captain America: Civil War' and being "in awe" of him.

He described being unaware of Boseman's illness: "After his family released their statement, I realized that he was living with his illness the entire time I knew him. Because he was a caretaker, a leader, and a man of faith, dignity and pride, he shielded his collaborators from his suffering. He lived a beautiful life. And he made great art. Day after day, year after year.

"That was who he was. He was an epic firework display. I will tell stories about being there for some of the brilliant sparks till the end of my days. What an incredible mark he’s left for us."

He concluded the piece: "In African cultures we often refer to loved ones that have passed on as ancestors. Sometimes you are genetically related. Sometimes you are not. I had the privilege of directing scenes of Chad’s character, T’Challa, communicating with the ancestors of Wakanda. We were in Atlanta, in an abandoned warehouse, with bluescreens, and massive movie lights, but Chad’s performance made it feel real.

"I think it was because from the time that I met him, the ancestors spoke through him. It’s no secret to me now how he was able to skillfully portray some of our most notable ones. I had no doubt that he would live on and continue to bless us with more. But it is with a heavy heart and a sense of deep gratitude to have ever been in his presence, that I have to reckon with the fact that Chad is an ancestor now. And I know that he will watch over us, until we meet again."

Michael B. Jordan, who played Erik Killmonger in 'Black Panther' wrote of his struggles "to find the words" in the wake of Boseman's death.

Then continued: "You showed me how to be better, honor purpose, and create legacy. And whether you’ve known it or not… I’ve been watching, learning and constantly motivated by your greatness... Everything you’ve given the world … the legends and heroes that you’ve shown us we are … will live on forever.

"But the thing that hurts the most is that I now understand how much of a legend and hero YOU are. Through it all, you never lost sight of what you loved most... You are my big brother, but I never fully got a chance to tell you, or to truly give you your flowers while you were here."

He concluded his tribute: "I’m gonna miss your honesty, your generosity, your sense of humor, and incredible gifts. I’ll miss the gift of sharing space with you in scenes. I’m dedicating the rest of my days to live the way you did. With grace, courage, and no regrets. 'Is this your king!?' Yes . he . is! Rest In Power Brother."

I’ve been trying to find the words, but nothing comes close to how I feel. I’ve been reflecting on every moment, every conversation, every laugh, every disagreement, every hug…everything. I wish we had more time. One of the last times we spoke, you said we were forever linked , and now the truth of that means more to me than ever. Since nearly the beginning of my career, starting with All My Children when I was 16 years old you paved the way for me. You showed me how to be better, honor purpose, and create legacy. And whether you’ve known it or not…I’ve been watching, learning and constantly motivated by your greatness. I wish we had more time. Everything you’ve given the world … the legends and heroes that you’ve shown us we are … will live on forever. But the thing that hurts the most is that I now understand how much of a legend and hero YOU are. Through it all, you never lost sight of what you loved most. You cared about your family , your friends, your craft, your spirit. You cared about the kids, the community, our culture and humanity. You cared about me. You are my big brother, but I never fully got a chance to tell you, or to truly give you your flowers while you were here. I wish we had more time. I'm more aware now than ever that time is short with people we love and admire. I’m gonna miss your honesty, your generosity, your sense of humor, and incredible gifts. I’ll miss the gift of sharing space with you in scenes. I’m dedicating the rest of my days to live the way you did. With grace, courage, and no regrets. “Is this your king!?” Yes . he . is!  Rest In Power Brother.

Danai Gurira, who plays Okoye in 'Black Panther', recently broke her silence on her friend and co-stars's passing too.

She opened her piece with the words: "How do you honor a king?"

She then wrote: "He was the epitome of kindness, elegance, diligence and grace. On many an occasion I would think how thankful I was that he was the leading man I was working closely with. A true class act. And so perfectly equipped to take on the responsibility of leading the franchise that changed everything for Black representation.

"He made everyone feel loved, heard and seen. He played great, iconic roles because he possessed inside of himself that connection to greatness to be able to so richly bring them to life, he had a heroic spirit, and marched to the beat of his own drum; hence his excellence as an artist and the incredible courage and determination as he faced life’s challenges; while still guiding us all.

"He was zen and sweet and funny (with the very best laugh), attentive, and truly, truly, good. I can’t even wrap my mind around this loss. A loss resonating in my own heart as well as around the globe. The children he inspired, my heart aches for them, to lose their hero just as they finally found him. I am so thankful to have taken the Black Panther journey with him. To have known him, spent time in his light and leadership and to call him forever a friend."

“It was meant to be for Chadwick and me to be connected, for us to be family. But what many don’t know is our story began long before his historic turn as Black Panther. During the premiere party for Black Panther, Chadwick reminded me of something. He whispered that when I received my honorary degree from Howard University, his alma mater, he was the student assigned to escort me that day. And here we were, years later as friends and colleagues, enjoying the most glorious night ever! We’d spent weeks prepping, working, sitting next to each other every morning in makeup chairs, preparing for the day together as mother and son. I am honored that we enjoyed that full circle experience. This young man’s dedication was awe-inspiring, his smile contagious, his talent unreal. So I pay tribute to a beautiful spirit, a consummate artist, a soulful brother...”thou aren’t not dead but flown afar...”. All you possessed, Chadwick, you freely gave. Rest now, sweet prince.” #WakandaForever

Take care, brother. Your time was short. Your light was exceptionally bright. Thank you for shining for all of us. ✌🏿🕉

It is inconceivable to think you are no longer with us Chad. This world needs you, now perhaps more than ever. Your quiet steel and raging fire beautifully tempered by the fact that you are an honorable,generous, humble human being. A natural leader who eloquently and passionately seeks and stands for truth, whose art and life will shine as a beacon of inspiration for generations to come. Peace and love to you, and to your family. #wakandaforever

Your light brightened our days. It will continue to brighten our hearts and minds. Let the heavens be blessed as you illuminate the sky. Sending my love and prayers to the family. May god continue to hold you in his everlasting embrace. RIP Chadwick pic.twitter.com/wIUaooHLqq

How do I start to honor a man who I saw as a giant in many ways; with whom I thought I had so much more time...I am absolutely devastated by the loss of my friend and hero, Chadwick Boseman... I feel sick ... I’m in pain and I can’t belive he’s gone. Chadwick was a lightning rod for me... he gave me direction... when I saw “42”, I said, I could be like THIS guy. I knew I belonged because I could see myself in you... that’s what heroes do... they seem familiar because they make it possible for us to see our potential best selves demonstrated through them... Through seeing Chad’s work, I was able to say, “I could be just like you one day“ and when I saw you in person for the first time... at my audition for Black Panther, you acknowledged me and my dream by saying, “he’s ready”! Man, your words that day made me feel like my dream was finally real! Chadwick then proceeded to show us collectively everyday on set what it was to be a leading man. Not only through his work but by how he welcomed and created a space for all of us to feel safe, open and bold ... You even worked with me 1 on 1, on our scenes, so that we could get it right, well before the day of the filming ....Chadwick, Thank you! Chadwick, you are the best...you are me and I’m you and we are all one! Thanks for being someone I could look up to on and off screen ... your calm confidence was inspiring and exemplary. Thanks for sharing with me... you go ahead ...you did your job and did it well! You will NEVER be forgotten. Your heroism is now legend. We’ll carry the load and honor your legacy, the rest of the way! Bless King! #chadwickboseman #wakandaforever