Growing up in Dublin's Summerhill, it's pretty unlikely that Barry Keoghan could ever have imagined becoming a member of the Academy.

However, that is precisely what has happened as the 26-year-old is one of the newest members of The Academy of Motion Picture Arts and Sciences.

The organisation, of course, is responsible for the Oscars. Its almost 9000-strong membership is comprised of film professionals who are eligible to vote for the winners each year.

In total, 842 new members have just been invited to join. 29% of them arepeople of colour (a blatant response to the #OscarsSoWhite controversy) and half are women.

We can take it from his Instagram story that he has accepted: 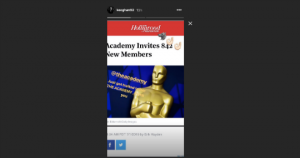 Keoghan's career continues to go from strength to strength, with a lead role in comic book adaptation 'Y: The Last Man' just one of his forthcoming projects.

Can you guess which movie these explosions are from?

Cinemas could reopen in Ireland by July, if not sooner

Yup, July release date is still on for 'Tenet' in spite of everything