5 reasons to get excited about new comedy Little

Here's what you need to know

'Little' hits Irish cinemas on April 12th and you won't want to miss it.

The comedy follows an overbearing boss who is transformed into a child version of herself.

Here are five reasons why you need to make it your business to check it out.

1. The writer of 'Girl's Trip' penned it

'Little' is co-written by director Tina Golden and Tracy Oliver. Oliver previously penned the script for hit comedy 'Girls Trip' which grossed $140.9 million in the box office back in 2017 and introduced the world to the force of nature that is Tiffany Haddish.

Oliver worked with Kenya Barris, the creator of 'Black-ish', on 'Girls Trip', and Barris is a producer on 'Little' too.

2. The cast is awesome

Regina Hall, who starred in 'Girls Trip' but is also recognisable to fans of 'Scary Movie', headlines the new comedy.

Issa Rae, the creator and star of hit series 'Insecure', plays her character's overworked assistant, April. Rae also starred in 'The Hate U Give' and loaned her voice to 'Bojack Horseman' last year.

Another notable cast member is Justin Hartley, who plays a teacher on whom 13-year-old Jordan Sanders has a crush. Hartley currently stars in 'This is Us' and would've played Oliver Queen/Green Arrow on 'Smallville'. Other credits of his include 'Revenge', 'A Bad Moms Christman', 'Passions' and 'The Young and the Restless.'

3. Its premise calls back to a beloved 80s classic

If 'Little' reminds you of 1988 Tom Hank starrer 'Big', in which the beloved American actor plays a teenager who transforms into an adult overnight after making a wish on a fortune teller machine, that's no coincidence as 'Big' did indeed inspire it.

'Little' also recalls such beloved comedies as '13 Going on 30' and '17 Again' so it's onto a winning formula. 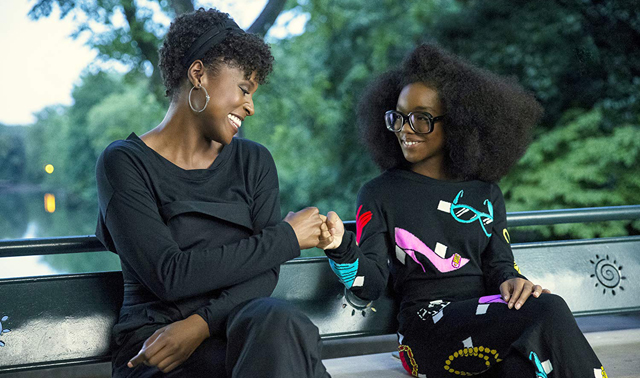 4. We could all use a comedy right about now

It's that awkward time of year, movie release wise. Oscar season is well over but blockbuster season hasn't quite arrived yet.

To fill the void, a comedy like 'Little' is just right. Plus it's the ideal film to watch on a date or for a fun movie outing with friends.

5. One of its producers is its 14 year old star

Mark our words - the name Marsai Martin is going to be huge.

At the age of 14, Martin is the youngest person to ever hold the title of executive producer on a Hollywood production.

In fact, it's thanks to her the movie exists. Inspired by the movie 'Big', Martin approached Kenya Barris, who she works with on the show 'Black-ish', with the idea for 'Little'.

Producing isn't her only talent either. Martin stars as the young version of Regina Hall's character, Jordan Sanders, in the film, and if the trailer is anything to go by, she is a little comic genius.

You can see her talking to Jimmy Kimmel about starring and producing the movie here.

Check out the trailer for 'Little' above.